Closure could be forthcoming. Following years of heated discussions, analysis, proposals and votes, the CIF-Southern Section Northern Division’s releaguing dilemma may finally be put to rest this morning during a CIF-SS Council meeting at The Grand Long Beach Event Center. “We are all going to be so happy when this is over,” Agoura athletic director Jason Rosenthal said. “Nothing is […]


This is in response to “Explaining the Higher Water Rates,” Oct. 15. After reading the letter by Janna Orkney, I opened my water bill today, expecting it to be higher. It was not just higher, it was exorbitantly higher. It was three times my average monthly summer bill.  I went back and did some research. This bill was over three times my […]

Show us your best Halloween


Halloween is just over a week away and many people in the area have worked their fingers to the bone trying to decorate their homes. If there’s a house in your neighborhood that has some really drop-dead decorations, we’d like to know where. A picture of the best-decorated home in our community will appear in next week’s Acorn. Please send […]

‘Frankenstein,’ ‘The Mummy’ to screen


The City of Westlake Village and the Triunfo YMCA will offer a free outdoor screening of two classic horror films for teens on Sat., Oct. 24 at the Westlake Village Civic Center, 31200 Oak Crest Drive. The 1931 version of “Frankenstein” will be shown at 6:30 p.m., followed by the 1932 “The Mummy.” Middle and high school students should dress […] 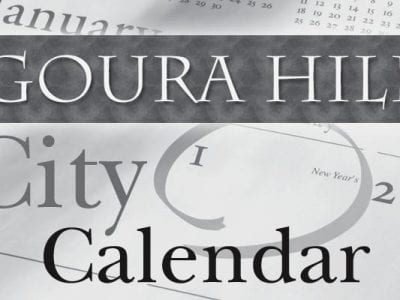 
The city of Agoura Hills Department of Community Services announces these upcoming programs. Unless otherwise noted, all events will take place at the Agoura Hills Recreation Center, 30610 Thousand Oaks Blvd. For more information or to register, call (818) 597-7361. •Team packets are available for the Winter 2010 Adult Basketball League.  The league plays on Sundays from 6 to 10 […]

Michael Sueoka and Shawn Love have been friends since the first grade, and they played football together at Thousand Oaks High. The longtime friends went off to college. Options for tackle football were limited. They discovered something similar, yet different—rugby. Sueoka, Love and a handful of buddies formed their own local rugby group, the Ventura County Rugby Club, nicknamed the […]

Do away with the Federal Reserve


I am heartsick at the partisan political letter from the gentleman from Newbury Park in the Oct. 15 issue. This writer is a victim, he is being conned, and he doesn’t know it. That con man is our Congress, our president and every other politician, Democrat or Republican, who says they promote freedom and democracy and will create jobs, while […]

Agoura Hills officials have placed a temporary moratorium on cellphone antennas in the city. The moves comes in response to a proposed antenna on the campus of Lindero Canyon Middle School, which has met stiff opposition in the community. In a unanimous vote Oct. 14, the Agoura Hills City Council adopted an emergency ordinance for a 45-day moratorium that prohibits […]

Men blocked her way out of the parking lot

An 18-year-old Oak Park resident was robbed just before 10 p.m. on Sun., Oct. 18 in the North Ranch Pavilions shopping center at the corner of Lindero Canyon and Kanan roads in Westlake Village. According to a Ventura County Sheriff’s report, the female victim walked out of a store to her sedan parked in the shopping center lot and put […]

Actors to present look at history


The Conejo Valley Historical Society general meeting program will feature the Pennyroyal Players and a look at living history through quilts and music as the group presents “Piecin’ It Together” in stories and songs at 2 p.m. Sun., Oct. 25 at the Stagecoach Inn Museum, 51 S. Ventu Park Road, Newbury Park. The Pennyroyal Players are Gay Durward, Ann Ehrenclou, […]