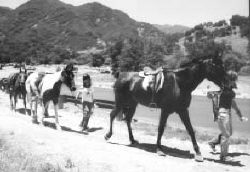 Some youngsters play football or softball, and some sing, play an instrument or dance. But some local children take up horseback riding and compete in races—even against adults. During a recent 30-mile horseback endurance race through the Santa Monica Mountains, Malibu Creek State Park, Malibou Lake, Peter Strauss Ranch and Paramount Ranch, none of the top finishers was an adult. […]

Next week in The Acorn


Read about Westlake resident Lyndsey Medders decision to transfer from Harvard-Westlake to Oak Park, where she will play basketball her senior year under head coach Lindsay Strothers; about Kyle McClure becoming the first Oaks Christian athlete to earn a major college athletic scholarship; about Aaron Ware being voted the top freshmen athlete of the year by the CIF-Southern Section; and […]

Guest opinion California works to reduce domestic violence Domestic violence is one of society’s worst crimes because it is committed by someone the victim should be able to trust the most. Intimate partner violence not only results too often in death, it also shatters the lives of children and other family members. In 2000, California law enforcement received 196,406 domestic […]