Peanut allergies found to be prevalent


Peanut allergies found to be prevalent The tradition of packing the classic peanut butter and jelly sandwich for lunch may not be a reality for some people today. Peanuts, an inexpensive source of dietary protein, have become one of the world’s most allergenic foods. Today, to go on an airplane and be served peanuts as a snack is rare. And […] 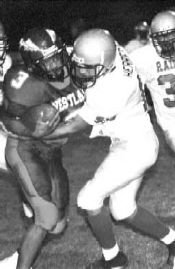 The injury-riddled Westlake defense came through with one its biggest games of the season last Friday night as the Warriors scraped their way to a hard-fought 24-7 victory over the Channel Island Raiders in a first round California Interscholastic Federation playoff game at Westlake. Despite several defensive players nursing injuries, including senior defensive back Chris Cannon who was out with […]


Calabasas mayor defends city’s fight against Ahmanson, its unity of purpose I am compelled to write this open letter to the public in response to the Nov. 8 article and the Nov. 15 letter to the editor in which Calabasas City Councilmember Michael Harri-son criticized the expenditures being made to fight Washington Mutual’s Ahmanson Ranch project. Our community has fought […]

If you’re living in a home or an apartment that you think you can afford, consider yourself lucky. The California Association of Realtors reports the housing affordability index dropped to 33 percent in Ventura County in late 2000 vs. 54 percent nationally. The median selling price for a single family home in the county rose 16 percent to almost $300,000, […] 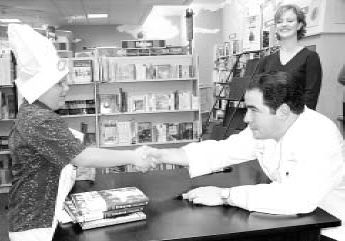 ‘BAM!’—Weston Parrish, 9, shakes hands with chef Emeril Lagasse during Lagasse’s book signing at Westlake Promenade’s Barnes and Noble. Lagasse is one of the country’s best-known chefs and cooking show hosts. The book signing was to promote his latest boo


‘BAM!’—Weston Parrish, 9, shakes hands with chef Emeril Lagasse during Lagasse’s book signing at Westlake Promenade’s Barnes and Noble. Lagasse is one of the country’s best-known chefs and cooking show hosts. The book signing was to promote his latest book "Prime Time Emeril." In addition to running his five top-rated restaurants in New Orleans, Florida and Las Vegas, Lagasse has […]


The Friendship Connection for Women, a club for mid-life women, will host a potluck luncheon at 11:30 a.m. on Wed., Nov. 28 at a home in Newbury Park. A representative from Michael’s Crafts will be demonstrating holiday gift wrapping and craft ideas. Guests interested in joining the club are welcome. The club is geared for those women who are no […]

OPHS football team bows vs. Nordhoff in CIF first round


OPHS football team bows vs. Nordhoff in CIF first round By Wayne Harrison Acorn Sports Writer After his team’s 28-15 loss vs. Nordhoff in the first round of the California Interscholastic Federation (CIF) playoffs, head coach Dick Billingsley praised his seniors and said he hoped they would help instill a winning work ethic into the underclassmen. "They’ve had a great […]


Calabasas must continue to fight to save Ahmanson Ranch with everything we’ve got, whatever the monetary cost may be. Impacts on the 101 Freeway will be more than unbearable with an additional 45,000 trips daily, not to mention the smog and pollution. Our beautiful city of Calabasas will be destroyed if Washington Mutual develops Ahmanson. With the announcement Nov.14 of […]