By Gary Wosk
Special to The Acorn 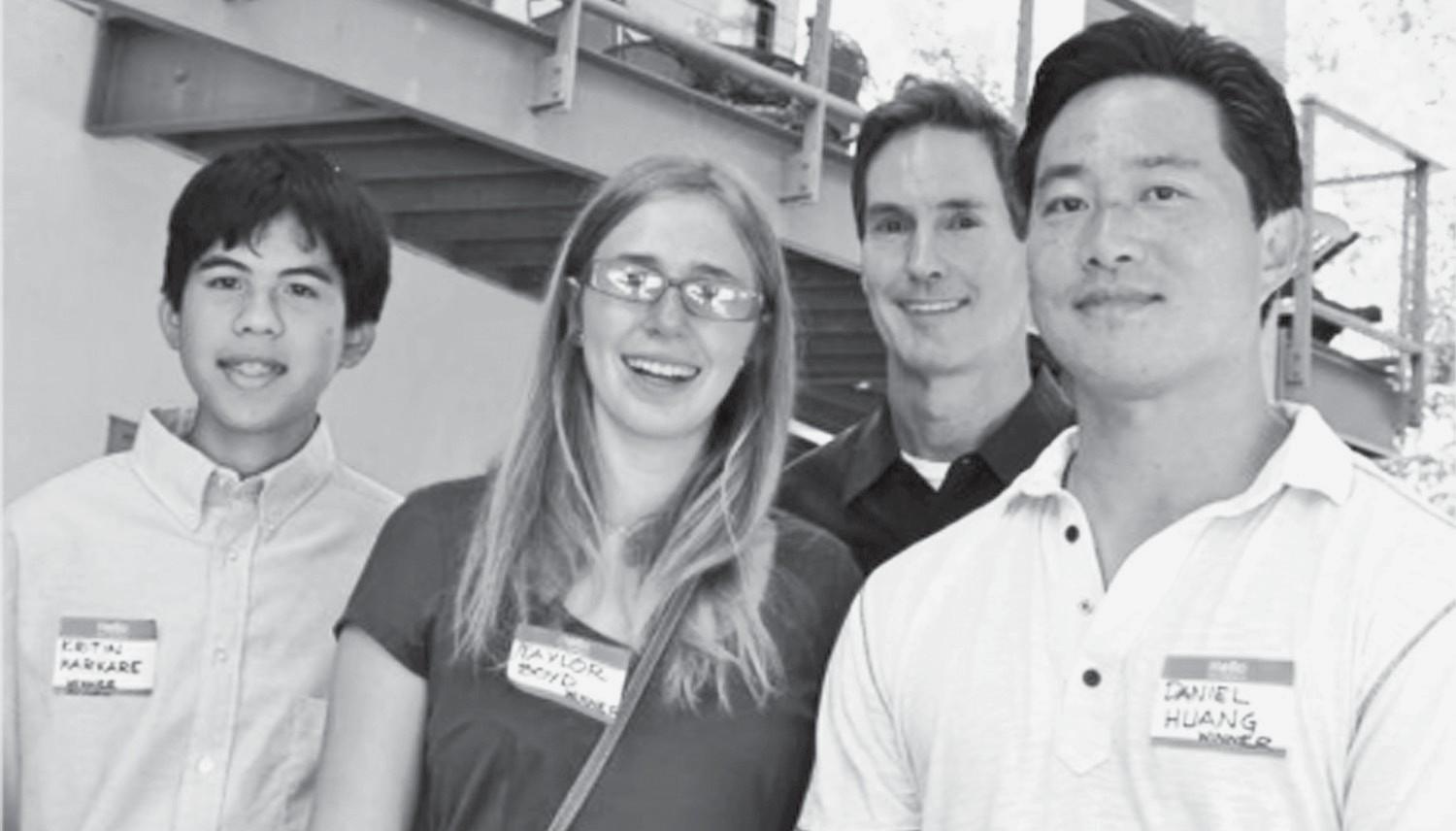 PENNING PERFECT PROSE—The California Writers Club San Fernando Valley Chapter laudes the winners of the 2013 Acorn Fiction in a Nutshell contest at the group’s Sept. 7 meeting in Calabasas. From left are winners Krirtin Karkare of Thousand Oaks, Taylor Boyd of Calabasas and David Huang of Oak Park. In back is Acorn managing editor John Loesing, who introduced the writers.

They’re not on the New York Times best-seller list yet, but it’s only a matter of time.

Perhaps it wasn’t the big break they’re hoping for, a discovery by a literary agent or a deal with Random House, but several of the first-place winners of the Acorn Newspapers’ Fiction in a Nutshell contest who read their first-place stories at California Writers Club/ San Fernando Valley monthly meeting on Sept. 7 increased the odds of that happening.

“For now, they will have to be satisfied by being welcomed with open arms by our membership,” said CWC-SFV president Nance Crawford. “If I heard right, several of our published authors mentioned they wished they could write as well.”

The winners were announced several days earlier in the newspaper, which invited their readers to submit 100-word stories that covered such topics as drama, science fiction, romance, comedy and adventure, anything that’s unusual and electrifying. Many were up to the challenge.

In all, 10 first-place winners were selected for the Acorn’s fivenewspaper chain. Each received a $50 prize and a biography in the newspaper.

About 300 people entered the contest which was judged by copy editors who focused on writing style, creativity and story line. Those ingredients were never in short supply as stories were reviewed multiple times by the judges to make sure that in their opinion the best had been chosen.

The two first-place winners selected by The Acorn were among the 70 entries received from the newspaper’s Agoura Hills, Calabasas, Oak Park and Westlake Village coverage area. These winners also received free CWC-SFV memberships.

“It’s always a joy to discover a new voice,” said Crawford, “and The Acorn’s generous work has not only given attention to deserving wordsmiths, but has brought inspiring new members to our attention. We look forward to supporting their literary dreams and ambitions.”

Before he introduced the winners, Acorn managing editor John Loesing outlined what impressed the judges the most.

“The imagination and creativity of this year’s winners knocked us for a loop,” said Loesing, who began The Acorn contest in 2006. “In this age of tweets and frequently mindless online blogs, it’s refreshing to see writers of all ages putting pen to paper and composing stories that have a beginning, middle and end and sentences that really pack a punch.”

The winners read their stories as they were projected onto a large screen for the convenience of the audience that packed the Katzenberg Room of the Motion Picture and Television Fund.

“In With the Rain” by Taylor Boyd, 14, of Calabasas is a poignant tale of a girl who finds a connection with her great grandmother during a thunderstorm.

“Slag” by Daniel Huang, 41, of Oak Park is a tickling science fiction account of a snail attack on enemy black widows.

And “A Tryst Abandoned” by Kritin Karkare, 16, of Thousand Oaks speaks from the point of view of a piece of luggage on an airport carousel that feel like it’s been abandoned by its owner.

The twist and turns, zigs-andzags and surprise endings made for some enthralling theatre, and each story received an enthusiastic round of applause at its conclusion.

And what wasn’t there to like with such narrative as:

“Raising her smile to the sky, she allows torrents of water to drench skin, clothes air. In the storm, my great-grandmother is young again” (Boyd).

“Upon finding adequate cover, he was contacted by Snail Special Warfare. ‘Good job, Slag. Your trail has illuminated the path for our attack. Stand by for further instruction’” (Huang).

“Around the carousels people dash to find their friends. The cramped premises buzz with commotion. Did he remember? Hey! Over here!” (Karkare).

Loesing was pleased as he introduced the contest to the branch.

“ We’re honored that such a prestigious organization as the California Writers Club has taken note of our annual contest,” Loesing said. “It was fun.”

Other romantic, dark and foreboding delights were revealed when Loesing, a former radio and TV journalist, read several stories from previous years. Tales about a dark pond filled with bodies and a soldier being buried alive were Stephen King-esque. And an apparent voyeuristic yarn turns out to be quite an innocent affair.

One of the largest turnouts seen at a branch function in some time was partly attributed to a steady barrage of stories that appeared in the newspaper.

“The teaming up of the newspaper and our branch is a great example of the community working together for one cause and in this case to encourage people to express their imagination by writing,” Crawford said. “I hope that giving a voice to these very talented writers will help pave the way for them to achieve future successes.”

This was the sixth time the newspaper has sponsored the contest.