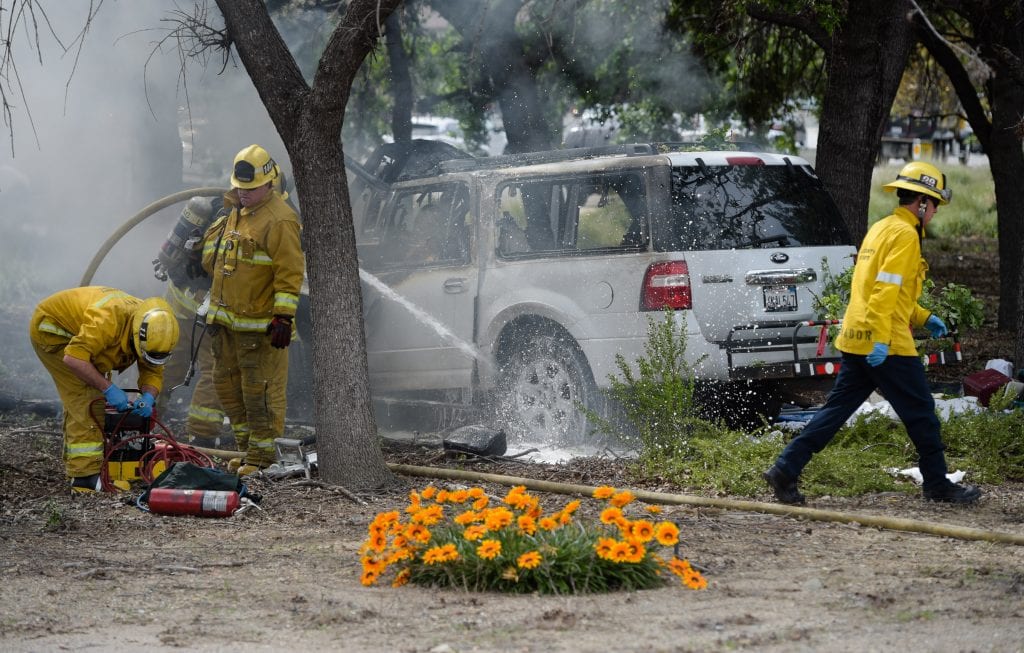 A woman and her dog died April 11 when the SUV she was driving crashed into a tree and caught fire at the Lindero Canyon Road exit off the 101 Freeway in Westlake Village.

The victim was 66-year-old Susan Chevalier of Westlake Village.

Chevalier was driving a Ford Expedition northbound on the 101 in the far-right lane at an unknown speed around 2:35 p.m, officials said. Investigators with the California Highway Patrol said she apparently did not follow the road, drove over a shoulder and collided with a tree.

“The force of the impact caused the vehicle to catch fire,” a CHP spokesperson told The Acorn. “Several motorists stopped to render aid and tried to gain access (to the vehicle). The driver was unconscious and pinned within the vehicle.”

The motorists were unable to get the Chevalier out of the car before it became engulfed in flames, the CHP said. Her dog, which was pulled from the vehicle, later perished.

The accident shut down the Lindero Canyon Road exit and caused northbound traffic gridlock for more than five hours while responders investigated the cause of the crash.

Chevalier had a 40-year career as a wardrobe/costume designer for TV commercials. She had previously owned a cafe in Venice Beach with her brother, Bruce Stanley.

Her friend Buzzy Cancilla said Chevalier was driving home from Mexico, where Chevalier owned a house she had been visiting. Cancilla learned about the accident from Stanley, who was informed by authorities late Thursday night.

“They don’t really know why she went off the road,” Cancilla said. “We’re all wondering if she fell asleep or had a heart attack or a stroke. It’s kind of a mystery. She was loved by so many people. We’re trying to figure it out together.”

Lindero Canyon Road was the exit Chevalier took to get home, Cancilla said. The fact that the crash happened so close to home has left friends and family searching for answers.

Cancilla and Chevalier’s friendship dates back to 1980. Cancilla said the two spoke nearly every day, even sharing a conversation after Chevalier crossed the border on Thursday.

She was divorced from her husband of 25 years, cinematographer Michael Chevalier. She did not have any children.

“She had three brothers, and they each have children. Her nieces and nephews were like her kids,” Cancilla said. “She’s famously known as ‘Aunt Sue.’ Everybody loved her.

Chevalier was driving home with her dog, a rescued American bulldog named Ivy.

“Susan was this bright, shining star at the center of her friends’ world. We just feel this black hole, we all feel the loss,” Cancilla said.