Windows to the Almighty 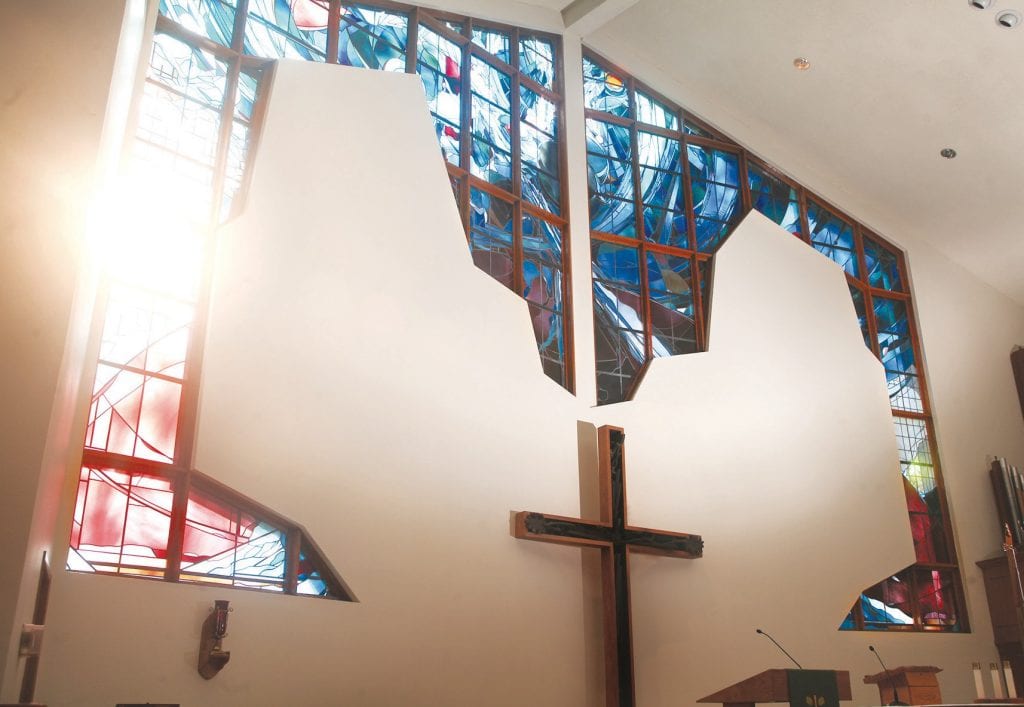 Every morning in the chapel at Holy Trinity Lutheran Church in Thousand Oaks, the world is made anew. As the sun rises in the east, it illuminates the sanctuary at 1 W. Avenida de Los Arboles through a 34-foot stained-glass window depicting the moment of creation. Heavenly orbs swirl over blue waters as shafts of light reach down toward the brown earth. 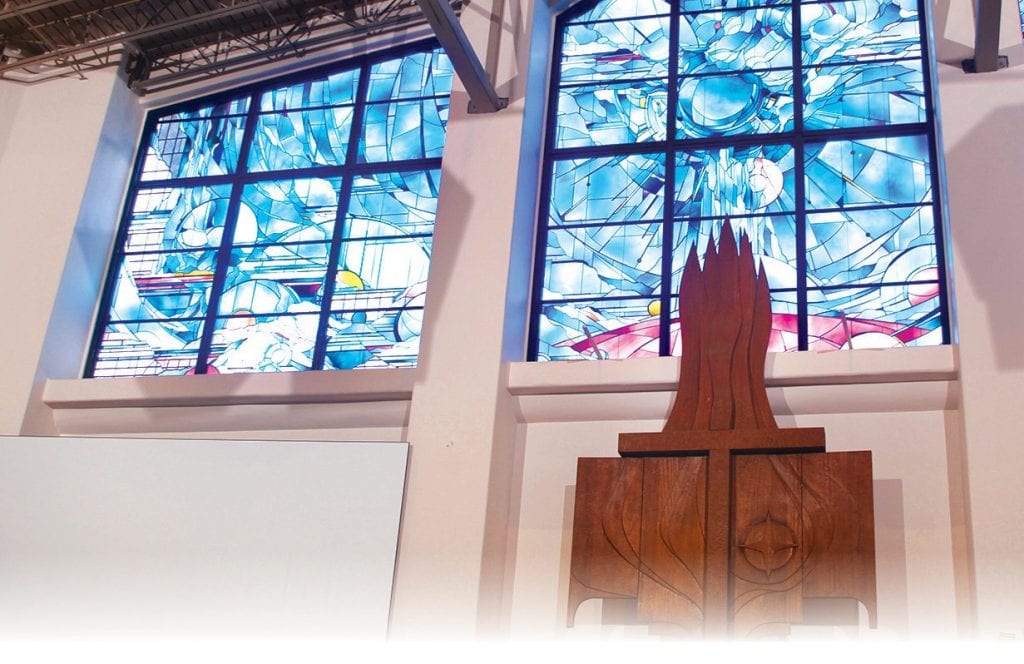 The scene was inspired by the first chapter of Genesis, when God created the planet from a cosmos that was void and without form.

It’s a cosmic drama that replays through the window at sunrise each day.

The Rev. Erik Goehner has led Holy Trinity for the past three years. He said the window is a focal point of worship and a place of reflection to help parishioners center themselves in preparation for church. 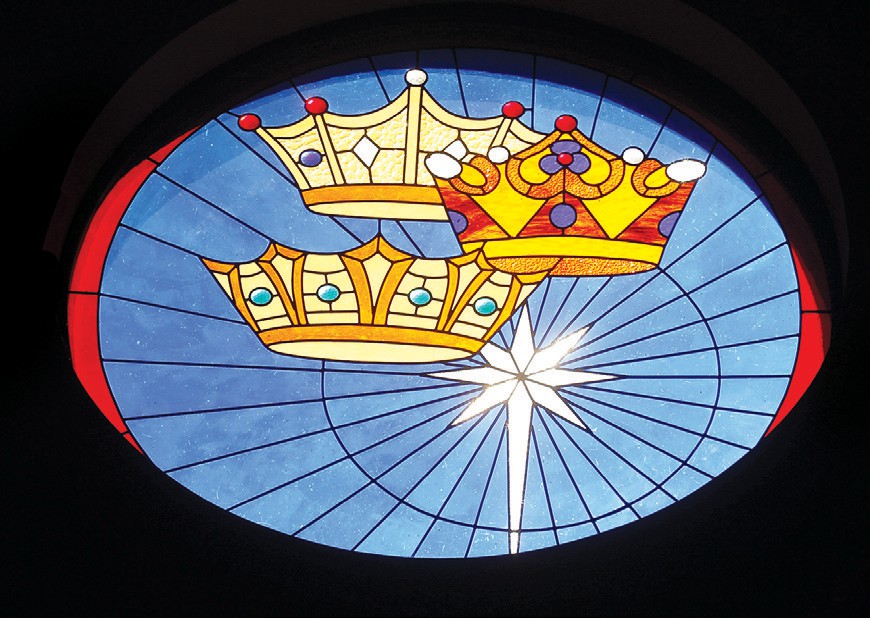 “Art, like music, helps us transcend our earthly bounds and calls us to something bigger than ourselves,” he said. “Every once in a while, the light becomes blinding. That gets our attention, too.”

The leaded- glass window spans 400 square feet. It was designed and installed in 1983 by Mark Eric Gulsrud, a Cal Lutheran University graduate who also created a stained-glass window for CLU’s Samuelson Chapel.

The stained-glass creation is one of many contained in houses of worship in the Conejo Valley. Some are abstract, others are representational. But for the congregations that worship under their colored panes, the windows aren’t just art—they’re a point of departure for pondering the divine mysteries of religion. The Rev. Steve Herder is an associate pastor at Ascension Lutheran Church, 1600 E. Hillcrest Drive, Thousand Oaks. He said the chapel’s stained-glass window, also designed by Gulsrud, helps parishioners transition from the hectic mentality of everyday life into a deeper contemplative state. 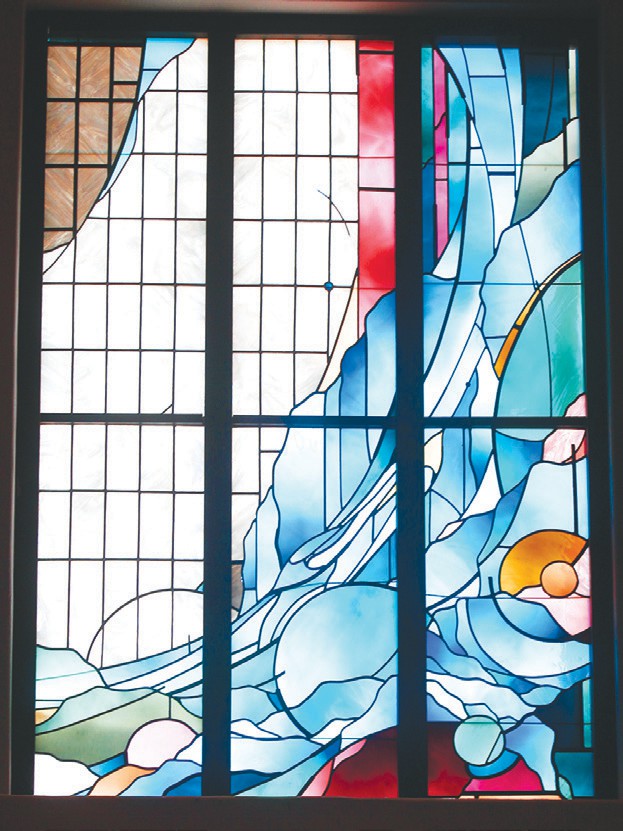 “It invites them into a space of worship,” he said.

Herder said that while many stained-glass windows portray Bible scenes, Ascension’s window is an abstract depiction of creation as oceans and mountains sit under the fire of God’s spirit. He said the conceptual nature of the image gives worshippers latitude to draw their own interpretations of the window’s bright hues.

“It’s the peace people are usually drawn to,” he said. “I love the colors.”

United Methodist Church of Thousand Oaks has three large stained-glass windows dominating its sanctuary at 1000 E. Janss Road. Known as the trinity windows, one represents creation, one represents Easter and one symbolizes the Holy Spirit.

The Rev. John Yoon said the windows express the Christian belief that God has revealed himself through creation, through the risen Christ and through the continuing presence of his Holy Spirit.

“From beginning to end, it covers everything we believe,” he said.

Yoon said the church loves the windows so much it has gone to great lengths to preserve the fragile works of art.

Designed by Laguna Beach-based artist Joseph Maas in 1987, the windows weathered a quarter century of exposure to the elements before they started to deteriorate.

In an effort to repair leaks and cracks, the church launched a $110,000 capital giving campaign in 2014 to refurbish the installation. Over a period of 18 months, each piece of glass was painstakingly replaced.

“Now it’s good for the next generation,” Yoon said.

At Church of the Epiphany in Oak Park, the stained-glass imagery is more traditional. The Episcopal church obtained its elaborate windows, which depict scenes from Scripture, from a church in Tujunga, Calif., after that congregation dissolved. The windows were donated to the local church, which incorporated them into the construction of its chapel at 5450 Churchwood Drive.

Bill Cabrol is the verger for the Epiphany congregation. He said congregants meditate on the window’s scenes during services. The visual theology contained in the vibrant panes does more than tell stories from the Bible, Cabrol said. He considers the windows a powerful symbol reminding worshipers that they have left the profane world to enter into a sacred place.

“Ritual in prayer is really important to get people out of their normal way of thinking,” Cabrol said. “The ritual scrapes off mundane coats of armor and makes us vulnerable to God’s word.”

Other stained-glass windows to check out:

More From Family Go To The Family Section