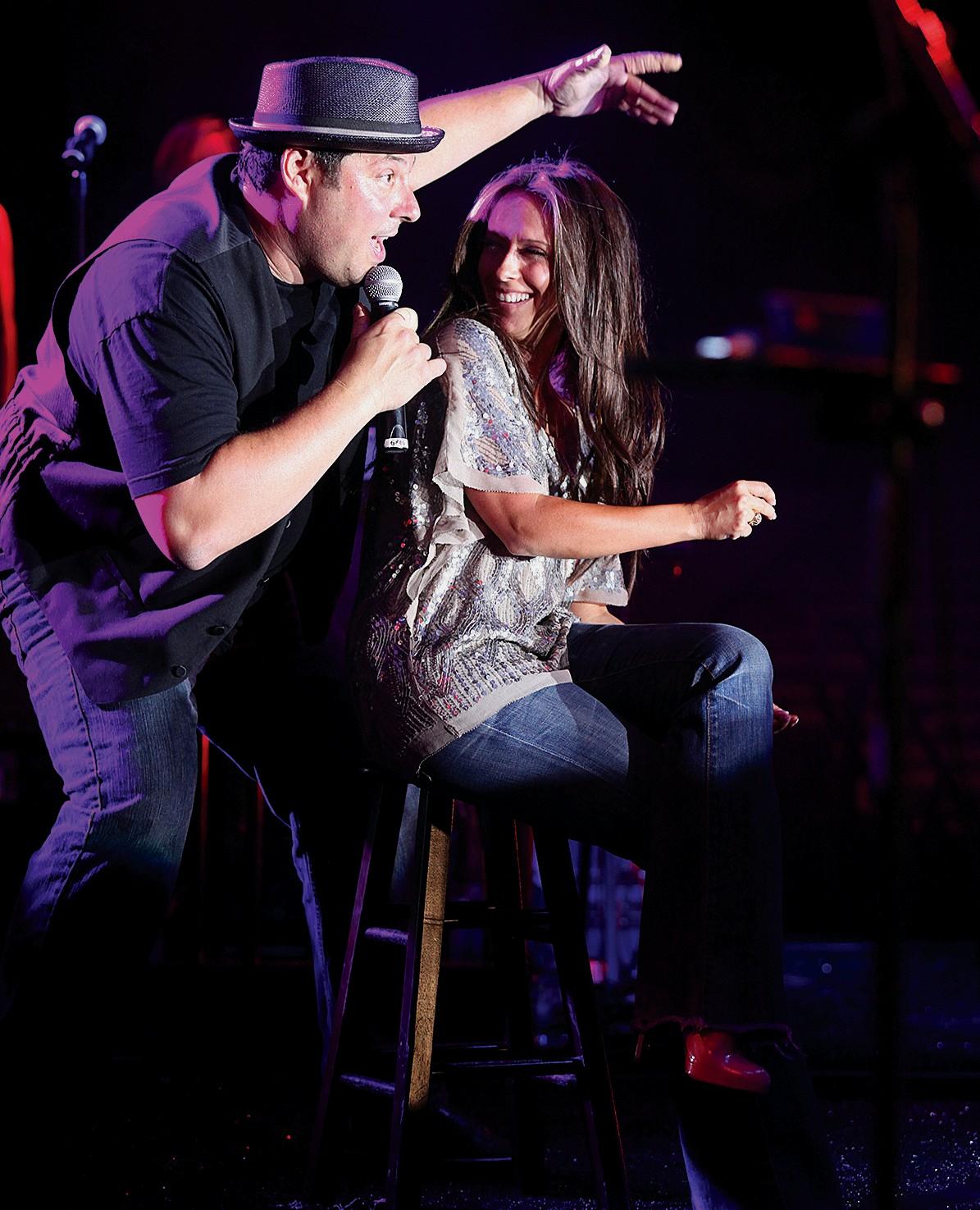 Declaring it a windfall for the students and teachers of the Las Virgenes Unified School District, the organizers of last Saturday’s gala dubbed THE Event are saying the $150-a-ticket party in Calabasas raised more than $400,000.

“We were hoping among ourselves to make $100,000, $150,000, we thought that was pretty aggressive,” said Jessica Pinto Nedick, co-chair of THE Event. “So when the total numbers came back, we were just blown away.”

The celebrity-laden evening soiree at the Calabasas Tennis and Swim Center was the inaugural fundraising gala for Together Helping Education, a foundation started in December 2010 by a group of community members concerned about statewide cuts to public education.

Pinto Nedick, who co-chaired the event alongside Marc Hernandez and Deanna Glassberg, said the nonprofit group saw the evening as an opportunity to raise awareness about the foundation and to raise the alarm about the funding plight of local schools. But it turned out to be much more.

“It really showed what this community is capable of doing when given the opportunity to unite . . .” Pinto Nedick said.

Greeted by balmy weather and the opportunity to taste fine wines and sample some of the area’s high-end restaurants—Maestro’s and Fleming’s steak houses among them—more than 1,000 guests filled the outdoor venue to near capacity. And when time came for the live auction, the crowd of LVUSD parents and supporters didn’t keep their hands stuck in their pockets.

With Chris Harrison—host of TV’s “The Bachelor” and “The Bachelorette” and parent of a child at White Oak Elementary in Westlake Village—lending his services as master of ceremonies, and professional auctioneer Jeff Tanenbaum handling the bidders, the live auction raised approximately $160,000, including $85,000 during the auction’s “Raise Your Paddle” portion.

Asked how THE Event was able to be successful when so many nonprofits are struggling, Pinto Nedick credited the foundation’s executive board members with coming up with a fundraiser that really fit the community—then calling every number in their Rolodex to drum up support for it.

“We really reached out to our relationships and our connections and created what we thought would be an incredible coming-out party, and all of it is to benefit teachers and counselors,” she said.

No connection was more important than the one forged between foundation president Hernandez, and Greg Grunberg, whose children are in the same class at Round Meadow Elementary School in Calabasas.

Grunberg, a familiar face to TV viewers from his roles on NBC’s “Heroes” and more recently on Lifetime’s “The Client List,” also happens to be the parent of three boys at three different schools in the school district. His oldest, 16-year-old Jake, goes to Agoura High School; Ben, 12, is at A.E. Wright Middle School and youngest Sam, 8, is at Round Meadow Elementary.

When Hernandez, part-owner of Brent Deli’s in Westlake Village, approached Grunberg about helping with the event, both he and wife Elizabeth—who were later named honorary co-chairs—jumped in full force, Pinto Nedick said.

“They are an incredible couple,” she said of the Grunbergs.

Greg Grunberg not only offered to invite all his celebrity friends, but he offered to let his band, Band from TV—a group comprising actors from popular shows like “Lost” and “Desperate Housewives”— play for free.

“It was such a smart thing (for the foundation) to do, to give a very direct invitation to these parents who want to do something, who want to help out the schools, ‘Hey, come have a party,’” said Grunberg, who has his own foundation dedicated to raising awareness about epileptic seizures.

During its hour-long performance Saturday night, the band welcomed special cameos by comedian Wayne Brady and actress Jennifer Love Hewitt, both friends of Grunberg. Also seen at the event: boxer Audley Harrison, a member of THE, and Backstreet Boys band member Kevin Richardson.

“This school district was so ripe and ready for something well organized and put together,” Grunberg said. “(The credit) goes directly to Marc, Jessica and Deanna (Glassberg), they put in so much hard work and it showed. It was just flawless.”

Pinto Nedick said the best thing about last Saturday’s event wasn’t the great food, wine or music—it was that audience members bought into the foundation’s message.

“Our message was very clear: We have the control. We can make what happens in Sacramento irrelevant to our children’s education, that was our message, and that resonated. People got it.” 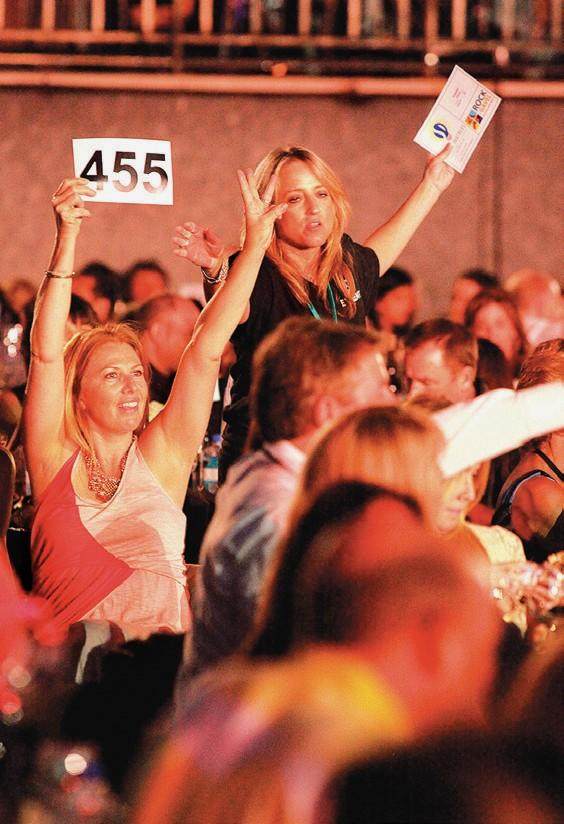 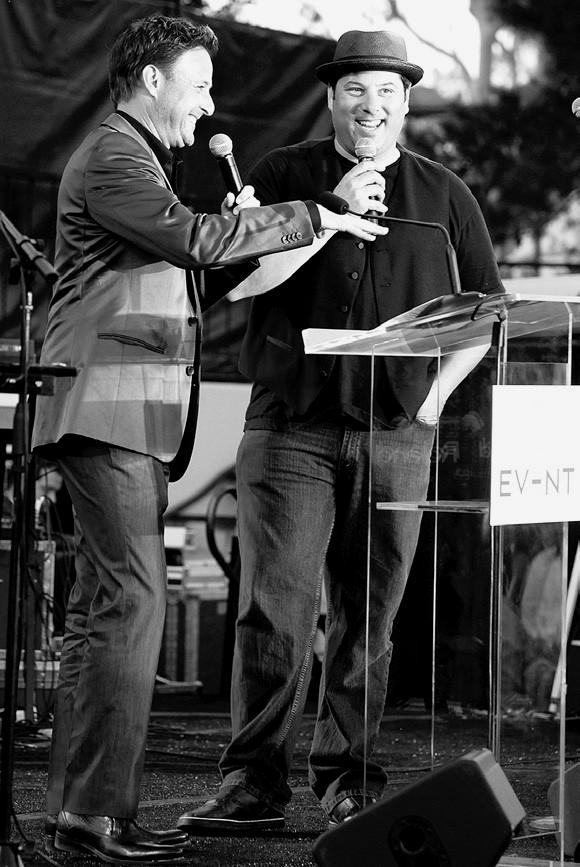 CELEBS—Chris Harrison, host of TV’s “The Bachelor,” and Greg Grunberg, actor and founder of Band from TV, entertain the crowd at THE Event at Calabasas Tennis and Swim Center last Saturday. Harrison and Grunberg both have children in LVUSD schools.