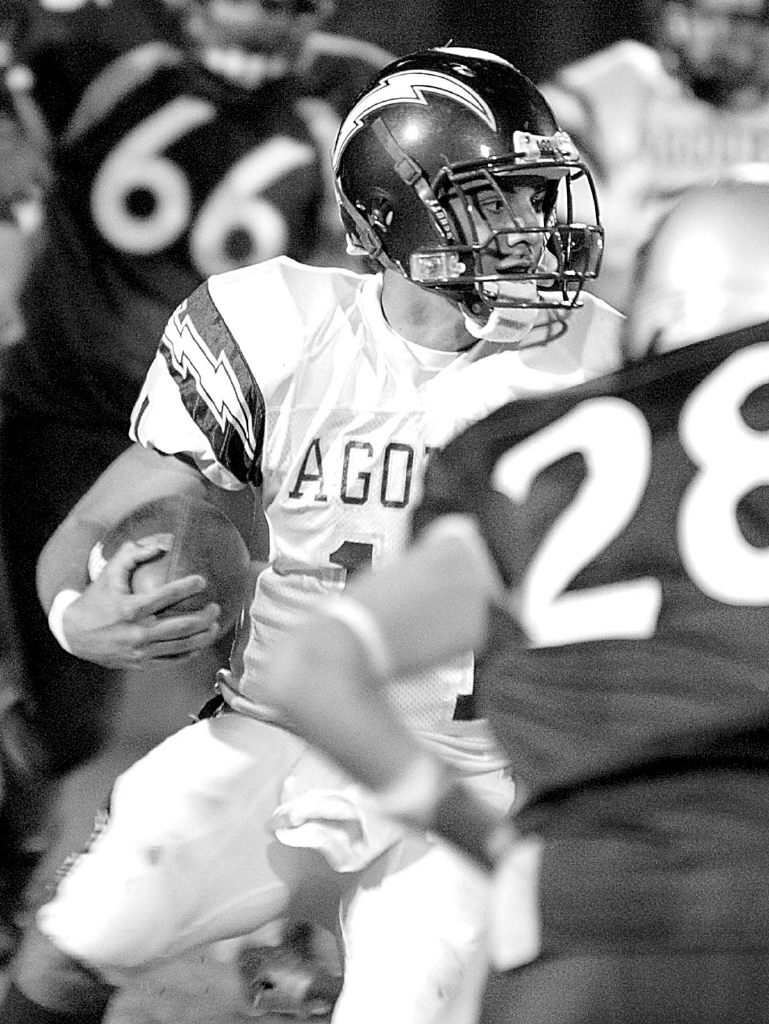 FINDING HIS WAY-Dominick Huerta of the Agoura Chargers searches for daylight in the Pioneers’ defense during the fourth quarter of last Friday’s 54-10 victory over the Simi Valley Pioneers.

If you think the race for president was tight, just take a quick peak at this week’s Marmonte League standings.

Four teams find themselves deadlocked in second place with a 3-2 record, and two of them will meet on the field this Friday as Agoura travels to Newbury Park for a critical late-season showdown full of playoff implications.

As players try to focus their concentration to matters on the field, both coaches and fans have spent the week hypothesizing over the numerous outcomes that are possible considering the fact that six teams remain alive in playoff intention. Though Royal has assured itself of at least a share of the league title, even T.O., which sits with three league losses, could still sneak in with help.

"I gave up about two weeks ago trying to figure out who we had to beat and who had to beat who," Hurley said. "The only thing I know is that after this week we could either be tied for second or tied for fourth. And after that, we could end up anywhere from tied for first to sixth place."

Coming off an improbable and emotional win over Westlake on a late-game extra point block by Jeffrey Giles, the Panthers know they’ll need another mistake-free performance if they hope to knock off the Chargers, a team that’s been playing inspired football since the controversial loss to Westlake.

"Honestly, I think all that Westlake game did to (Agoura) was make them mad," Hurley said. "So now we have to deal with a mad animal backed into a corner. Plus, they’re getting healthier."

Following a 54-10 dismantling of Simi Valley last weekend, the Chargers and quarterback Cory Smits are determined to continue their drive for the playoffs with a win this week, knowing that only winless Calabasas lies ahead.

"If we win two games, we’re in the playoffs. It’s as simple as that," Smits said. "The only thing we can do is try to win football games. We have no control over anything else. We just want to keep playing our game and let the chips fall where they may."

Agoura’s biggest asset, its passing attack, has thrived lately with the reemergence of wide receiver Mark Lawrence (who missed three games with a hand injury) and the return of guard Patrick Novack, an expert at protecting the passer. With Smits playing his best ball of the season, the Panthers will be hard pressed to find a way to stop the Chargers’ bevy of talented receivers.

"I think our offense is really starting to perform how we thought it would at the beginning of the season," Lawrence said.

With the Chargers’ ground game hurting, expect the Panthers to blitz Smits aggressively, trying to force turnovers and make things happen on the defensive side of the ball.

On the Panthers’ side, quarterback Jordan LaSecla is coming off arguably the biggest win of his career against Westlake, a turnover-free performance that surely meant a lot to a still young and improving passer. Instead of throwing deep, LaSecla and his receiving corps beat the Warriors with an effective short-passing game. Expect Newbury to try and execute the same plan against an Agoura team that will do all it can to shake LaSecla’s newfound confidence.

"To me, I’ll take seven 12-yard passes over one 90-yard bomb," Hurley said. "We are most interested in how many first downs we can throw for."

While fans can expect both offenses to perform, the biggest question mark for this game is on defense, as two units that have had ups and downs all season try to come together in this vital contest.