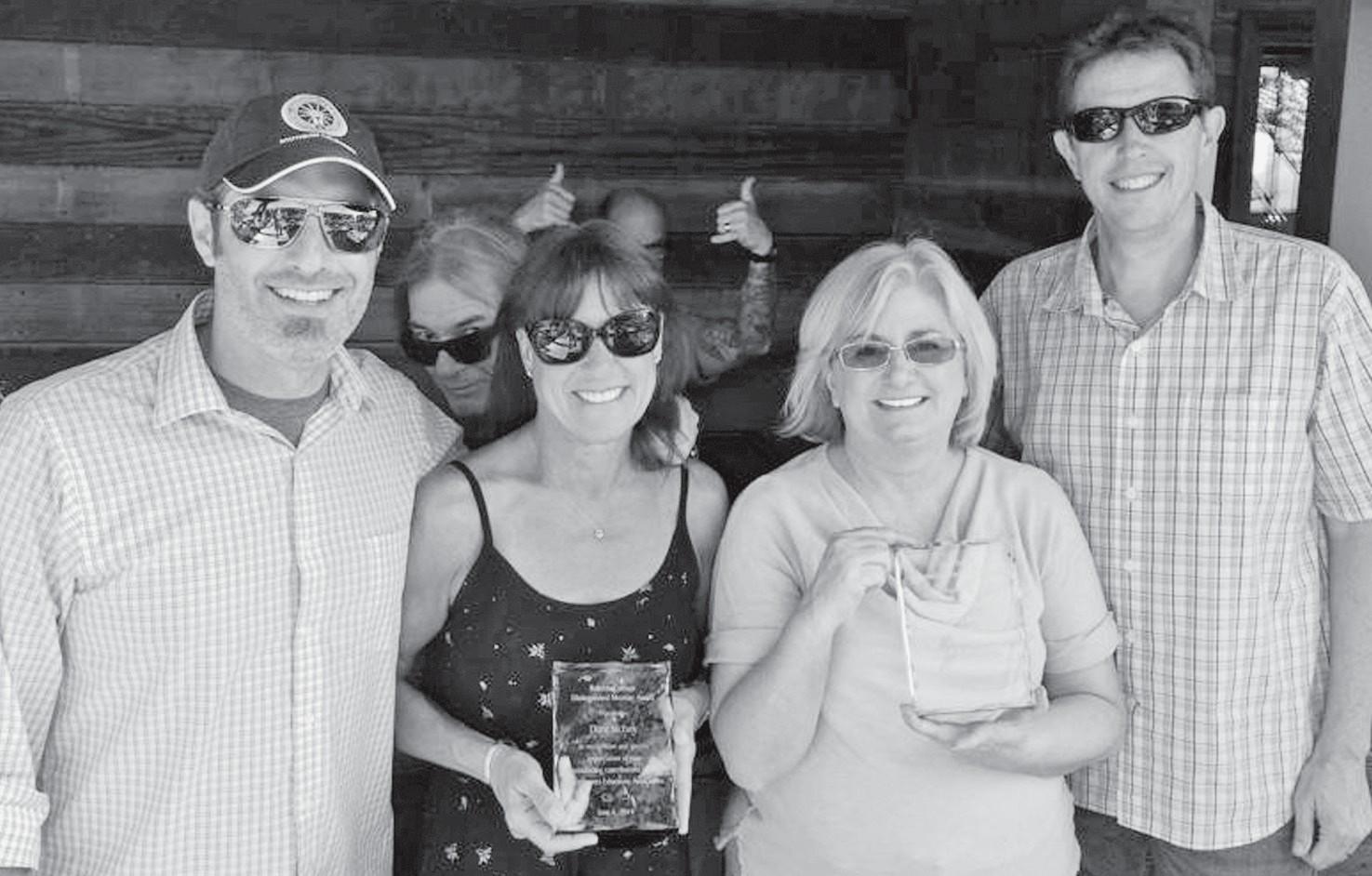 Awards in the name of Sandi Pope and Roberta Consani—two longtime teachers and educational advocates who have retired—were delivered June 4 by the Las Virgenes Educators Association.

The association created the Roberta Consani Distinguished Service Award and the Sandi Pope Friend of Education Award last year to honor two women who dedicated their professional lives to students, teachers and education.

The Roberta Consani Award goes to a teacher leader who has gone above and beyond for the profession and LVEA, said California Teacher Association representative Jake Anderson.

The Sandi Pope Friend of Education Award recognizes a community member, business or organization that assists LVEA in its educational pursuits.

This year, the Roberta Consani award was given to Calabasas High School English teacher Diane McEvoy.

At Tavern 101 in Agoura Hills, Anderson and Las Virgenes Educators Association co-presidents Craig Hochhaus and Andrew Staiano praised McEvoy for her dedication to her profession and work with the LVEA.

“Diane is a longtime supporter of all certificated employees in Las Virgenes Unified School District,” Hochhaus said. “Whenever assistance is needed for anyone, especially at Calabasas High School, Diane always steps up. She has managed the LVEA scholarship program, along with Pat Brooks at Agoura High School, for years. This is a scholarship fund for graduating seniors who are pursuing a career in education.

“She has been a member of our executive board as recording secretary for at least 10 years. Perhaps most important, she is passionate about protecting the rights of our certificated employees and making sure they are treated with respect.”

Anderson said McEvoy received the award for all of her years of work on the executive board of the association and for being an advocate for teachers at Calabasas High School and throughout the district.

Consani, who is traveling in her retirement and couldn’t attend the awards presentation, sent Anderson remarks about McEvoy.

“Please tell Diane congratulations for me, and I am so happy that she is receiving this award,” Consani wrote. “I wish I could be there with her. She is an important and dedicated leader in LVEA and deserves this award so much— love her.”

McEvoy launched her teaching career at Calabasas High School in 1987, although she worked as a secretary at the school’s student store from 1983 to 1986 while she was attending Cal State Northridge.

She has taught all levels of English at the school and has been the CHS English department chair for 15 years. She was in charge of the cheerleading squad for five years and for three years was the chief adviser for the Associated Student Body.

McEvoy said her biggest challenges as a teacher and education advocate was battling “the bureaucracy and negative image of teachers” that some people have expressed over the years.

But, she said, the students have always countered any negativity and have been the root of her joy of teaching.

As for being chosen for the Roberta Consani award, McEvoy said she was “completely surprised.”

“It means so much to me because it is an award chosen by my peers,” McEvoy said. “The award is in honor of a woman I always admired and counted as a friend. We also had a mutual love of Bruce Springsteen!”

This reporter was surprised to have won the Sandi Pope Friend of Education Award. Staiano invited me to Tavern 101 where I was presented with a lovely etched glass award for my work at the Acorn Newspapers over the past 10 years covering educational issues in the Las Virgenes Unified School District.

The award was especially meaningful to me for several reasons. Mainly, I admired Sandi Pope’s boldness and fierce determination to represent the interests of teachers and students for 35-plus years. She never—and I mean never—backed away from a fight she deemed worthy.

Pope attended every school board meeting. While she sat grading papers, if a subject came up that warranted her opinion, she would step up to the podium and speak her mind. She never minced words.

She fought for teacher pay raises, participated in district budget talks and battled state leaders who at times seemed bent on decimating education funding. In 2005, she fought then-Gov. Arnold Schwarzenegger who tried to weaken Proposition 98, a 1988 measure that maintains a state minimum of education funding.

When the state of California lopped $17 billion from its education budget, Pope and other educational leaders staged protests to bring awareness to the community.

She also bristled at the politics of some groups that tried to weaken teacher tenure and explained many times that tenure only protected teachers from being fired on a whim. Teachers could and should be fired if they were doing a poor job, she said, but tenure allowed due process to reign over personality clashes between administrators and teachers.

As tough as Pope was in the political arena, she was a softie when it came to her students.

She developed many traditions at Willow Elementary School in Agoura Hills, including the annual “Thriller” show that had kids dancing, singing, reciting spooky poetry and telling Halloween jokes.

Pope, who is now living happily in Hawaii, sent some kind comments about me to Staiano to read.

“She totally deserves the award. . . . She has been fair in her reporting, always seeks the other point of view, wanting to truly grasp both sides of story,” she wrote of my job at The Acorn. “She is willing to take on the editor of her paper when she feels a story is being sensationalized at teachers’ expense (she did not always win), always respected the ‘off the record’ confidentiality, endures endless hours of board meetings and cares deeply about education.”

Pope’s comments triggered a memory of when I first started as a reporter at The Acorn. She asked to meet with me to talk about education, but the heart-to-heart talk with her in 2003 ended up being about journalistic ethics.

I vowed to be fair, and it felt like I had achieved this goal when I was presented the Sandi Pope Friend of Education award.