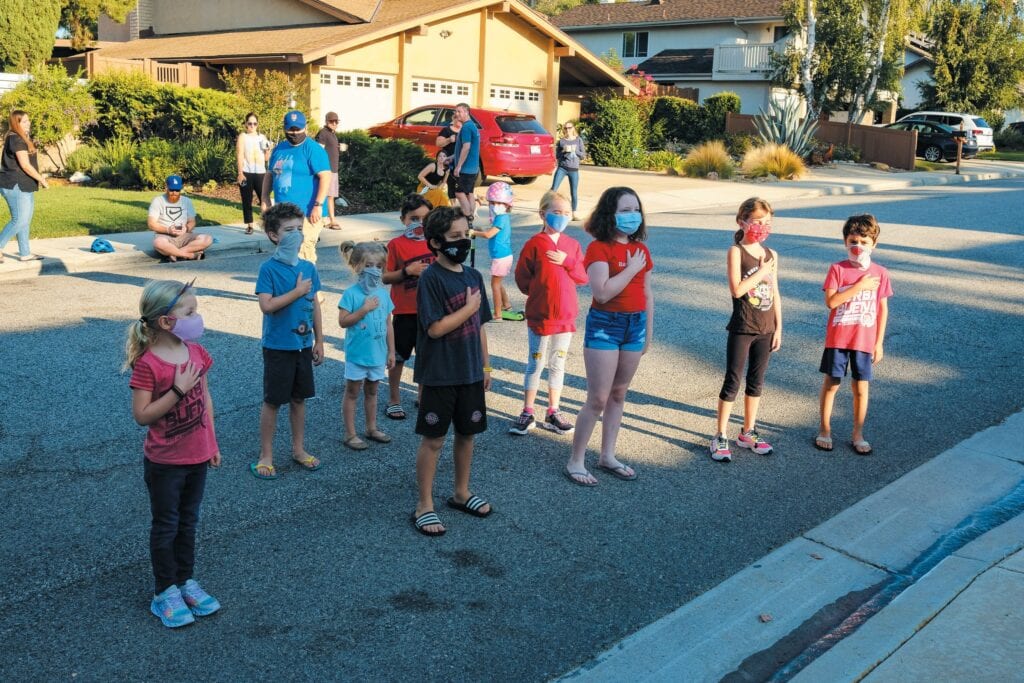 ‘I PLEDGE ALLEGIANCE’—Children gather Aug. 28 on Cedarhaven Drive in Agoura Hills to say the Pledge of Allegiance before their virtual classes begin. Almost a dozen kids and parents take part in the neighborhood’s new morning tradition MICHAEL COONS/Acorn Newspapers

Although students can’t return to campus, parents still want a sense of normalcy in their daily lives.

One neighborhood in Agoura Hills is doing what it can to make sure their children remember the rhythm of on-campus life.

A group of kids who live in the 5400 block of Cedarhaven Drive—all students at Yerba Buena Elementary School in Agoura Hills—gather each morning to say the Pledge of Allegiance before returning to their homes for a day of remote learning.

Katie Pitillo, who has three children, said the idea started organically after campuses closed last spring. She required her kids to start saying the Pledge of Allegiance each morning before their digital classes began to help them feel like they were still in school.

“Usually we drop the kids off at school, they run around and play for 10 minutes before class, so we thought we’d let them do that on the street.

“There are like 10 kids that all go to Yerba Buena,” Pitillo said. “It came time that morning for them to come home, and my youngest said, ‘Mama, let’s go do the pledge,’ and some of the other kids heard her and wanted to do it together.”

One of Pitillo’s neighbors has a flag in his front yard that the kids face when it’s time to say the pledge.

She said she could tell the resident was a little confused at first, but soon realized what was happening.

“I think he was looking out his window wondering why all these kids are staring at his yard until he realized they were doing the pledge,” Pitillo said. “He’s been coming out each morning, and we’ve also gotten more and more non-parents coming out too. It’s awesome.”

“We run the gamut of political beliefs on the block,” Pitillo said. “The kids are just used to starting their day with the pledge, so we thought we’d keep some structure.”

Rachel Asher, a mother of two on Cedarhaven Drive, said the Pledge of Allegiance recital is just one way the kids on the block are safely socializing.

“As a parent I feel like anything we can do to show them some form of normalcy and help with their anxieties, be social and outside and interacting, we should be doing that,” Asher said.