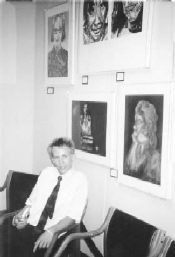 DRAWING PRAISE–Daniel Jacob sits in the office of Gov. Gray Davis where one of his drawings, below, was chosen to be put on display. The artwork is Daniel’s rendering of musician Bob Dylan.

Unsurpassed numbers of artists practice their craft in the world today. Whether they’re professionals or students, artists have a hard time getting recognition because of competition. Daniel Jacob, a 15-year-old student at Oak Park High School, has created a work of art now on display in the office of Gov. Gray Davis.

Daniel drew a portrait of a young woman. He used pastels on black paper and with bright vibrant colors, he illustrated the character of his subject. The Ventura County Arts Council held Daniel’s work of art in high regard at an Arts Scholar Day event last month.

In addition, Daniel was honored for being selected as a scholar of the California State Summer School of the Arts, a four-week visual arts program he attended in Valencia last summer. There, he was awarded a certificate of recognition for his work and given a handcrafted folio of that work.

Last month, a reception was hosted in Sacramento to recognize some of the year’s top art scholars. Daniel was one of the artists honored. Hosting the event was California First Lady Sharon Davis.

Daniel’s work is now part of an exhibit called "Creating Space." It will until the first week of August. As part of being accepted into this exhibit, Daniel and others were given a Certificate for Distinguished Achievement in the Visual Arts.

Angelika Jacob, Daniel’s mother, is very proud of her son. "(Daniel) is an outstanding student, a cross country runner and a very gifted young artist."

Daniel plans to study more art in the future. He hopes to be a graphic designer or possibly an architect. If he pursues graphic design, he’d like to attend the Cal Arts Institute in Valencia. If he goes for architecture, he’ll try for UCLA.

Since he was 6 years old, Daniel’s been drawing. He entered his first art contest at 8 and has won many awards. A couple years ago, he entered an art show at the Ventura County Fair and was awarded the "director’s award," the "best of division award" and the "best of show award."

Coming this summer is a book called "Innocent Impressions" printed by a group called Arts and Kids. The book will include pieces of art won in a national contest sponsored by the group. One of featured items is that of Daniel’s titled "The Detective," which won first place prize in the "12 to 13 category."

"The Detective" is a black and white work and will sit next to a color picture of Daniel in the book. It’s expected to arrive in bookstores later this summer.

Daniel was born in Westlake Village and has lived in Oak Park all of his life. He loves to draw and paint, and his favorite medium is oil on canvas.

Since he was 6, Daniel has attended Michael Ward Studios art school. 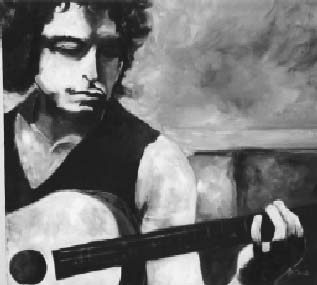