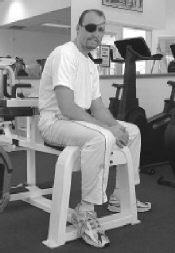 CHUCK ROGERS/The AcornNO PESSIMIST-Garrett Warren of Westlake Village is recovering (miraculously, some might say) from a gunman’s shots. The incident occurred back in May. Instead of letting it affect his attitude and demeanor, Warren has a new lease on life and remains upbeat.

Almost everything in Garrett Warren’s life was going great, despite the fact that he was going through a painful divorce.

He’d opened the Garrett Warren Training Center in Agoura Hills. He had a successful career and many acting and stunt opportunities that took him to exotic places. He has an infant daughter who he adores.

That is, until May 20, when Warren opened the door to his Westlake Village apartment to find a stranger with a gun shooting at him.

Warren took four bullets to his face and upper body before the gunman left, presuming him to be dead. He lost an eye, but survived. In fact, despite the horrific ordeal, he was driving again, went to church and went back to his gym just three weeks later.

"At the hospital, they said it was a miracle," Warren said. He has an incredible faith in God and believes that this is the second time he found himself facing death.

Once, while performing a stunt on a motorcycle, an 18-wheel tractor-trailer truck hit him. Both Warren and the truck were traveling at about 45 mph, and he said he was hit straight on and thrown 60 feet into the air. Nobody expected him to survive.

As it turned out, his leg was crushed but when the paramedics arrived, he was on the ground talking and telling jokes. Within a month, he was back at work.

"God has always been really good to me," Warren said.

Warren said police are still investigating the attempt on his life, so he cannot comment on any details of the case at this time.

He has won three championships in martial arts and has been Wayne Gretsky’s personal trainer for almost nine years.

In fact, Gretsky is Warren’s partner and has funded the training center. For this and everything that the Gretskys have done for Warren he’s grateful and thanks God daily. "He and Janet are just incredible. God has given me two friends that have bent over backwards to do everything for me. I wouldn’t be here if it weren’t for them," Warren said.

Warren has been a stuntman in more than 100 TV shows including the new Charlie’s Angels where he was the stunt double for Crispin Glover, who plays the lead bad guy in the movie.

He has doubled for Jean-Claude Van Damme, Dolf Lundgren and Casper Van Dien and was the coordinator on the new Aaron Spelling television series,"Titans," that will debut on NBC this fall.

At his training center, he teaches Taerobics and Tae Kwon Do and has been a personal trainer to several clients including celebrities like Gene Simmons from the rock ’n roll band KISS and rock star Eddie Van Halen.

Warren said the hardest two things for anyone who’s had to go through an ordeal like this — whether it’s a broken finger or a dislocated shoulder or an amputated leg — is the pain and the healing process.

"For me, I’ve always been the kind of person that never allows myself enough time to feel sorry for myself. Whatever happened, I just kept going," Warren said.

"I wanted to move. Then I told myself the best thing to do was to get back up on that horse, so I came back to the gym," he said.

Warren is thankful to all of his Tai Kwon Do students and his large support group.

"These little kids sent me the best cards. It was one of the reasons that I came back. I would never give this up — no matter how much money I make or don’t make," he said.

Warren would like others to know that whether it’s an emotional tragedy or a physical ailment, it doesn’t last forever.

"Just have patience, the end will be there, and don’t allow yourself to be consumed by destructive self-pity," Warren said.

He quickly added that there’s a certain amount of self-pity that you must go through, but said not to dwell on it.

There are two things that Warren thinks of when he looks back on this experience.

"I love the sayings ‘What doesn’t kill you, makes you stronger,’ and, ‘When life brings you lemons, make lemonade,’" he said.