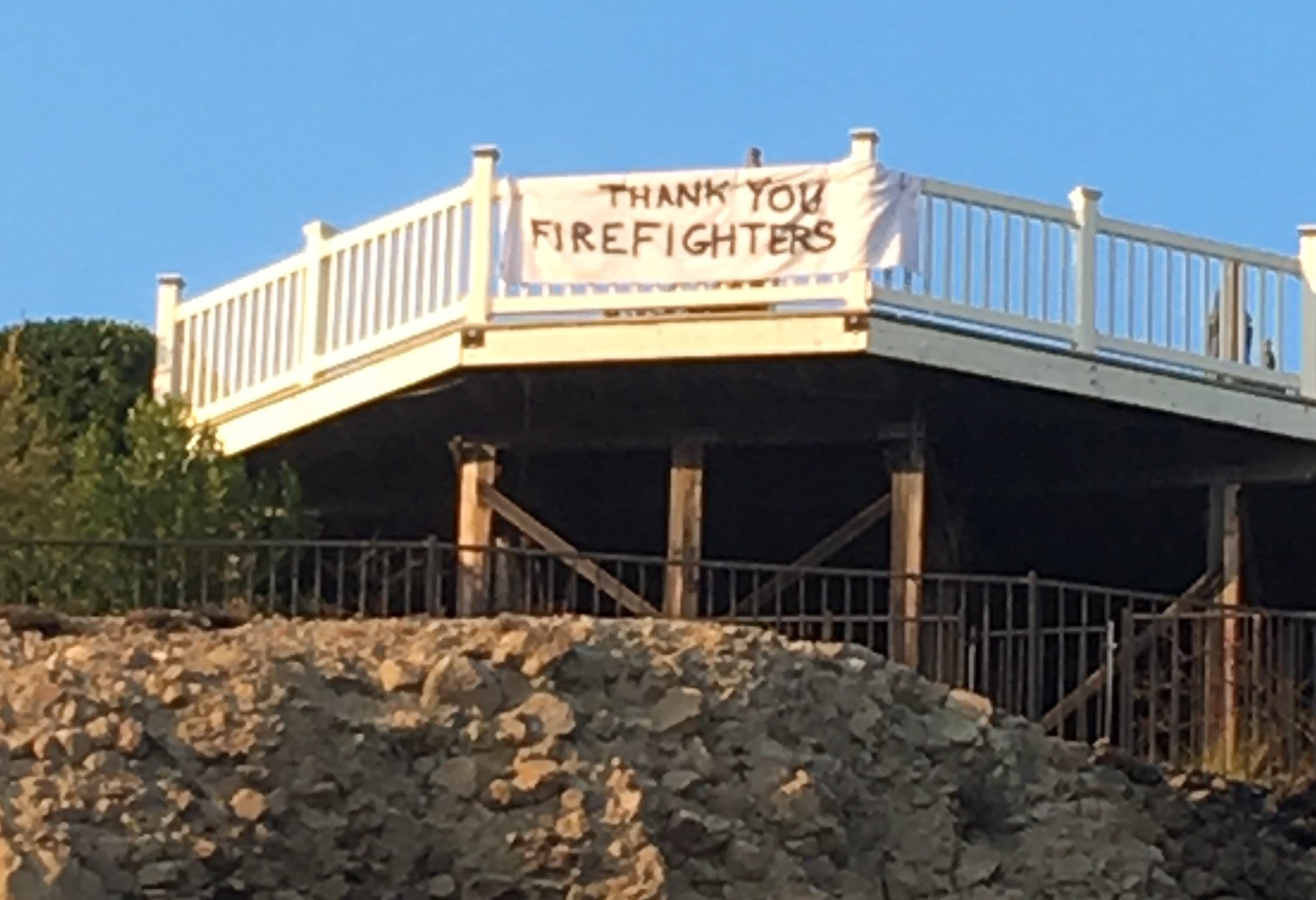 A resident hangs a “Thank You Firefighters” sign from the deck of their Westlake Village home on Saturday. IAN BRADLEY/Acorn Newspapers

Almost 48 hours after it started, the Woolsey fire has left the greater Conejo Valley area in its wake, but the fight is far from over.

Tonight, law enforcement lifted evacuation orders for several areas that were threatened by the now 70,000-acre blaze, including all of Simi Valley.

Residents are also allowed to return to their homes if they live in one of these areas:

Earlier in the day, evacuation orders related to the Hill fire, which burned west of Newbury Park, where also lifted, allowing residents of Camarillo Springs and Dos Vientos to repopulate.

Authorities are enforcing those evacuation orders in anticipation of strong winds expected Sunday through Tuesday that might reignite flames in the area. Those wishing to check on their homes won’t be allowed into evacuation zones without proper identification, said law enforcement, who are working to prevent looting.

Get up-to-the-minute information on evacuation orders as well as to see map of the evacuation areas at vcemergency.com.

Firefighters have the Woolsey fire 5 percent contained and will be working through the night to increase that number by digging trenches and dropping retardant in a perimeter that they hope will keep it from spreading, officials announced at a 4:30 p.m. press conference in Thousand Oaks.

“We’ve painted a lot of retardant along the ridges in the canyons, and then on the back side of the fire along Bell Canyon and we have crews in cutting lines,” Osby said. “This has been a very challenging and emotional incident for our organization in the sense of line containment. (The fire) is approximately 20 miles long and it’s length along Pacific Coast Highway from Los Angeles County to the Ventura County border line down is approximately 14 miles, so you can see some of the magnitude.”

The fire is still active in Malibu and Carlisle Canyon, but there are still plenty of hotspots in the burned areas that could erupt into flames when the 40-mph Santa Ana winds resume, Osby warned.

Meanwhile, damage assessment crews are still working to determine exactly how many structures have been destroyed, a figure that’s expected to number in the hundreds. Osby said some members of his department had lost homes to the same blaze they’re working to extinguish.

Firefighters have been aided by crews from surrounding states—153 fire engines have been sent to join the fight, 30 of which are focusing on the Woolsey fire. Resources are strained as the deadly and destructive Camp Fire is still raging in Northern California.

Some crews have been on the line since the Woolsey fire started on Thursday afternoon, but with reinforcements entering the fray, they’ll be able to sleep tonight before resuming the fight in the morning, Osby said.

The fires are taking their toll on the community, which is still reeling in the wake of the Borderline Bar and Grill mass shooting on Wednesday night.

Chief Mark Lorenzen of the Ventura County Fire Department said some of his men have a “10,000-yard stare.”

“We are normally fatigued in the first 48 hours when we have a fire, but on top of that there was just the emotional trauma from the Borderline shooting,” Lorenzen said. “On top of the hardness of the fire, we had that going in. The sheriff’s deputies too, who lost one of their own.”