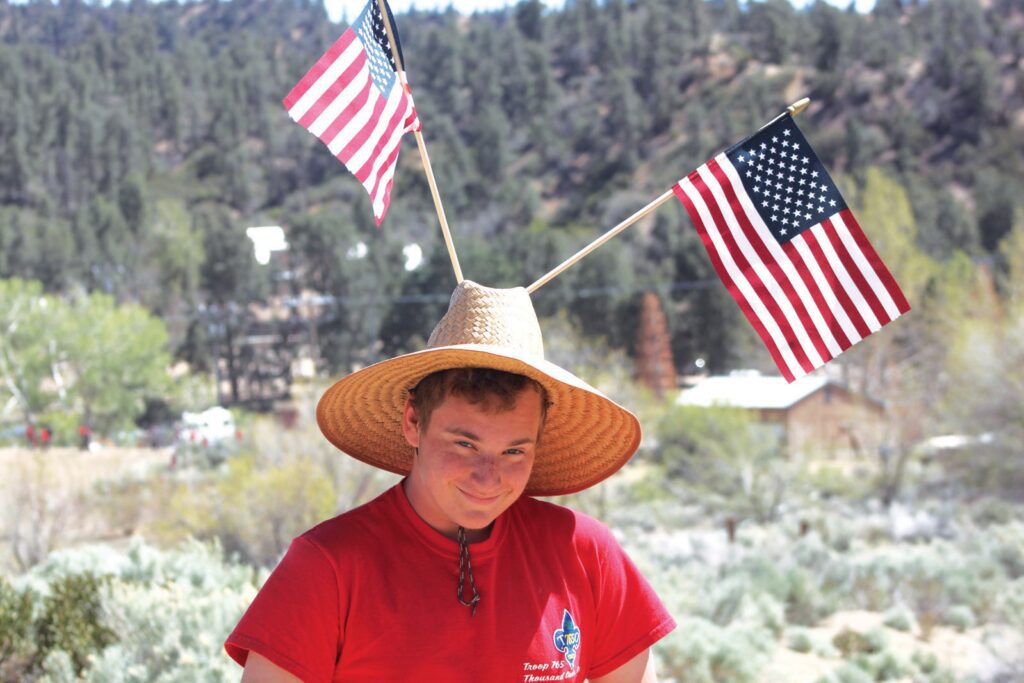 Scouting not only teaches life skills, but often leads to lifelong friendships, especially within a troop, where boys—and now girls—grow up together, local Scout leaders say.

Few events encapsulate the spirit of the Boy Scouts of America like Camporee.

An annual tradition dating back to 1920 in Ventura County, Camporee generally brings together troops in a city or local region for a weekend of skills learning and testing, friendly competition and camaraderie.

This year’s Camporee—held May 20 to 22 at Camp 3 Falls in Frazier Park—was different.

Not only was it the first event in three years—COVID canceled the 2020 affair and 2021’s was done in by wildfire—for the Ventura County Council, it was Camporee No. 100, and troops from the entire county gathered.

“Normally, when I think of Scouting, you have your troop and troop community and all that, but this weekend showed me that there’s a bigger community,” said 17-year-old Collin Edwards of Troop 858 in Camarillo. “I don’t think I can say I’ve had a better camping experience.” 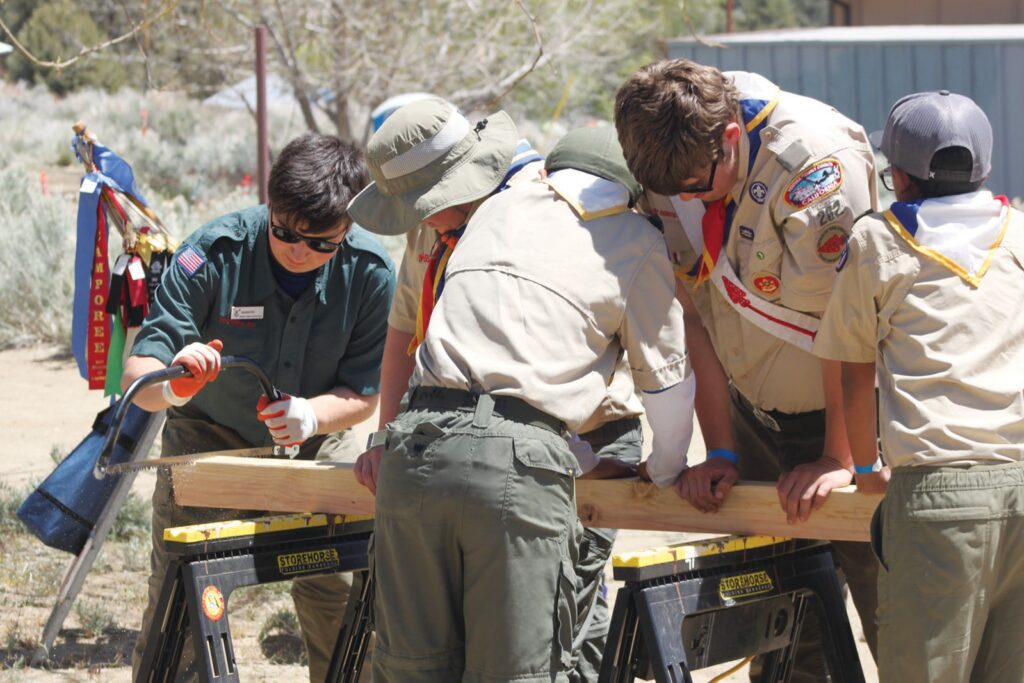 HAPPY HUNDRED—On the 100th anniversary of the Ventura County Council of Boy Scouts of America, the popular Camporee event once again brings Scouts together for myriad fun activities. Courtesy photos

Despite it being his first full Camporee, Collin, who’s been in Scouts since he was in kindergarten, was selected to help lead the event from start to finish.

“Seeing everyone at opening ceremonies is when I realized how many people were there,” he said of the just-over 500 campers. “I was a little nervous to talk in front of them, but then I figured, what do I have to lose? They’re all here to have a good time, too.”

Collin also co-hosted the next night’s program, the campfire, where Scouts take part in skits and other fun, and new members of the Order of the Arrow, the Scouts’ honor society, are announced.

While the two ceremonies are fun, it’s what comes in between that most Scouts seem to enjoy the most.

Troops break up into patrols, generally units of five or six mem- bers, and visit various stations to compete for points in contests like archery, shooting and survival skills. 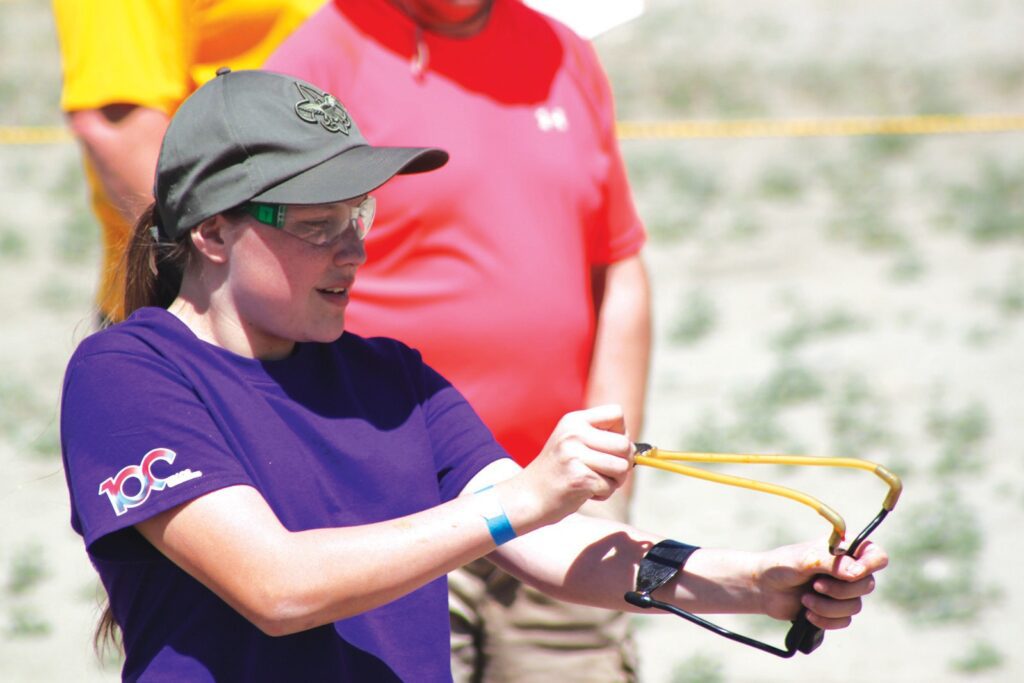 AIMING FOR A GOOD TIME—Scouts, both boys and girls, engage in Camporee activities, including slingshot practice, mountain biking and even a traditional Dutch-oven cooking competition. Courtesy photo

“They learn all these skills over the year, and Camporee is where you get to apply all that stuff,” said Gerritt Beatty, a Ventura County Council volunteer.

For example, to show their rope-tying skills, Scouts were put in a role-playing situation where they had to save a person sinking in quicksand using only short pieces of rope.

“You have to put together six pieces of rope,” Beatty said, “and you have to do it fast because they’re ‘sinking.’”

Not all the events were skillsbased, however. Some were just for fun.

Beatty’s son, also named Gerritt, spent much of his time helping run a golfing game his troop created for Camporee.

“The nice thing about running the golf event is that I was able to meet all the troops and patrols, and get to know their personalities and the troop personalities,” the 16-year-old said.

Gerritt said he was inspired by a troop from Ventura and one of its members at a golf chipping in which participants attempted to chip a ball into a bucket. By lunchtime not one Scout had made it.

“Then after lunch, I think it was Troop 102, tried and they were pretty good, but nobody got it in,” he said. “But there was one guy—he had special needs—and he made it in. He was the only person all day who made it into the bucket, and his whole patrol was super happy for him. It was a really inspiring moment in the day.”

Thirteen-year-old Skyler Reynolds of another Ventura troop, 119, didn’t get a chance to play golf, but he said he especially liked firing paintballs at targets using slingshots.

He said one of the additional things he found fun was meeting up with people he knows from school, De Anza Academy of Technology, who aren’t in his troop.

Dylan Lybarger-Monson, 14, found the same to be true.

Like Gerritt, he’s a member of Thousand Oaks’ Troop 765. Dylan attends home school and was able to connect with people from his neighborhood and friends on his water polo team he didn’t even know were in Boy Scouts.

Dylan’s favorite competitions were a mountain biking relay race, which his troop won, and the traditional Dutch-oven cooking competition. For the latter, either a main dish or dessert is cooked in a cast-iron pot over hot coals.

His group made traditional chocolate brownies as well as a citrus-caramel type “brownie,” for which he hit up Google for inspiration.

“I did some searching on the internet and added some stuff from stuff I’ve made before,” he said. “One of my passions is baking and cooking, so I drew on my knowledge from that.”

Another of the highlights for the Scouts was receiving a proclamation from the county’s Board of Supervisors delivered by county Sheriff Bill Ayub, an Eagle Scout.

“Whereas, for over 10 decades, the Ventura County Council of Boy Scouts and its members have devoted themselves to be regarded by the communities we serve as the premier provider of youth character and development achieving the mission of the Boy Scouts of America as well as positively impacting local neighborhoods,” the proclamation says in part. “Therefore, be it resolved that the Ventura County Board of Supervisors takes great pleasure in honoring Ventura County Council of Boy Scouts on the occasion of its 100th anniversary and commends them on the outstanding contributions they have made to our community.”