Roses in bloom demand a bridegroom 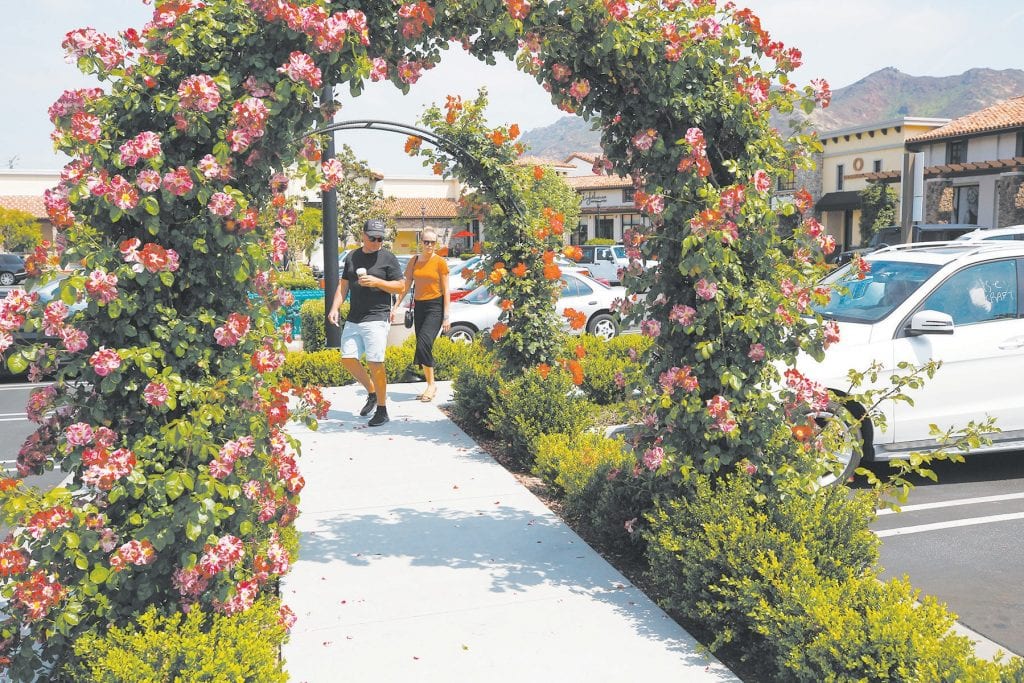 BOUNTY OF BLOSSOMS —A couple approaches the flower arches in the parking lot at the Shoppes at Westlake Village on May 13. The bright rose blooms are a welcome sight after a week-long ‘gloomfest.’ RICHARD GILLARD/Acorn Newspapers

If I were an impulsive gal and could’ve corralled an impulsive guy to marry me last Friday, we would’ve held our impromptu nuptials smack in the middle of the parking lot of the Shoppes at Westlake Village on Russell Ranch Road.

Why such a rash romantic move?

Well, for one thing, the sun made a very late appearance in the day, following a relentless week-long gloomfest of raw, miserable, cold, ugly, hideous spring weather. Oh, there were still clouds in the sky on Friday, but in a breakup mode. The interstices between the gray masses were lit by sunbeams in a gold-spangled champagne-pink color—an ideal hue for our wedding toast.

But most importantly, the trigger for my sudden bolt from singlehood to marrying anyone available and as loony as I am, was the rose arches in the shopping center’s big, busy parking lot. They sang out for a happy couple to be framed in a wedding day photo.

It seemed a quirky place to stumble upon a stunning floral display amid acres of asphalt strewn with stray shopping carts and burger wrappers. There are two landscaped walking paths that meander through the lot to reach the entrance to the shops.

Glasser is a freelance writer and local nature enthusiast. Reach her at whirlawaygig@gmail.com.

Me, I’m not much of a shopper. Rather, I’m intoxicated by this year’s rose displays everywhere, and nothing I’d yet encountered matched these parking lot pretties. Among them are Iceberg (white), Joseph’s Coat (an orange-red-gold blend) and Cecile Brunner (a prolific fluffy pink climbing mini-rose), each trained over their respective arch’s framework, without a gap visible.

It was the rose known as “Scentimental” that made the most indelible impression. The arch I yearned to hastily marry under was densely roofed in this sensational rich burgundy-and-vanilla bicolored rose wearing all manner of streaks and speckles. The patterning suggested a painter’s palette. It was the most vivid, joyful rose I’d ever seen, and there were zillions of flawless blooms.

I thought I’d go nuts trying to drink in such ample splendiferousness.

So that’s when the crazy notion to grab a guy and get hitched there and then seized me. I wanted to commemorate this most accidental encounter with such brilliant beauteous robust rose splendor, even if the wedding march would be interrupted by car alarms or revved engines. The white Iceberg roses were very matrimonial, and there was a sumptuous peach-colored rose that would have made a bouquet the size of a pizza.

In the end, no Romeo as rose-besotted as I happened past.

Consolation arrived in the lowering sun’s sudden flare of intense light that bathed each and every rose arch in an aura of shimmering gold. Solo or hitched, I could live happily ever after with an image like that.

More From Columns Go To The Columns Section