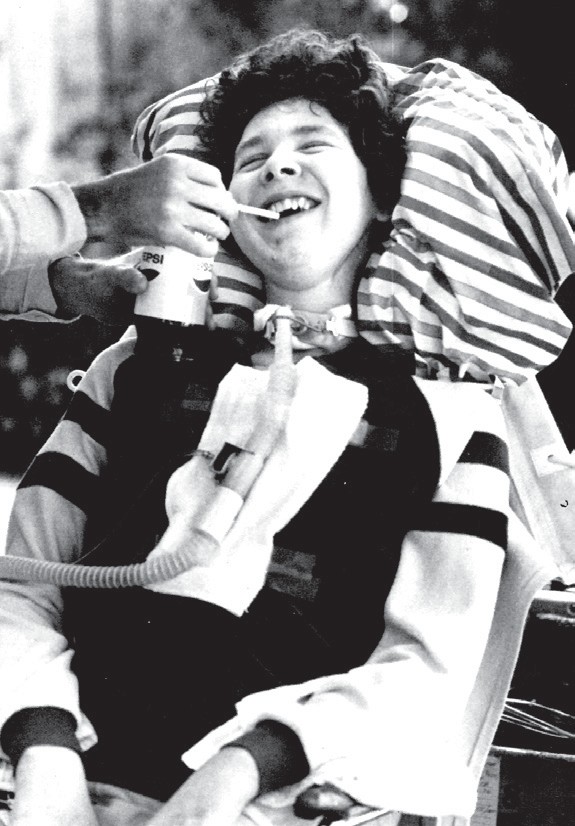 Keith Ritchie Football Stadium has been part of the Calabasas High School campus since 1988, but many current students probably think it’s just named for someone who gave the school a lot of money.

They wouldn’t be wrong, but that’s only half the story.

In 1977 Keith Ritchie was a captain on the Calabasas High School junior varsity football team until he was paralyzed from the neck down after being run over by a drunk driver at age 15. He used a wheelchair for the rest of his life and needed a respirator to breathe. He died in 1985 at 23 years old.

“My brother was kind of the quiet, straight and narrow, always had a 3.2 to 3.5 GPA, always did his homework, into sports, into girls, loved California, loved to surf,” said Kelly Ritchie, Keith’s younger brother. “He was a lot quieter than me. I don’t know how he (recovered), he had to be one of the toughest kids I ever met.”

Keith Ritchie was a new student at Calabasas High in the fall of 1977. He, his mother and brother had moved to the city from Newbury Park.

His friend and co-captain Jeff Albright said Keith became a part of the team almost instantly.

“One of the first practices, Keith made an incredible tackle. The rest of us looked at each other; it was like ‘welcome to the team,’” Albright said.

The accident happened Oct. 8 that year, after a football game. Keith Ritchie and two friends went to Ozone, an all-ages nightclub in the San Fernando Valley. They were sitting outside waiting for a ride when a drunk driver hit them. Ritchie’s friend Michael Weiner narrowly avoided serious injury.

“I was fortunate. I saw the headlights and heard the car roaring down on us. I remember jumping to try and get out,” Weiner said. “We were sitting three in a row. I was in the middle. The car hit me on my inner left thigh and calf, and I was completely bruised black and blue but no broken bones.”

The car ran over Ritchie and dragged him a few yards before stalling on top of him. Kelly Ritchie said the fire department had to remove the vehicle before taking his older brother to the hospital.

The car’s driver ran away but returned to the club the next night and was arrested. He never apologized or expressed remorse, Weiner said.

Kelly Ritchie said the doctors told them it wasn’t clear if his brother would survive.

Kelly was 12 at the time, too young to visit his brother in the ICU. He spent the nights doing homework and sleeping on the floor of the hospital waiting room.

“I knew he was back in full form when I heard he threatened (the staff) that they either had to let me in to see him or he was going to a different hospital,” Kelly Ritchie said.

In the hours after the accident, Calabasas High students lined the hallways of the hospital to show support, something Kelly said helped his mother. Students also organized numerous fundraisers to pay medical bills, and the community rallied around the family. Kelly said the support is what got the family through that period.

“If I didn’t have them I wouldn’t have made it through this. From the principal to the faculty, they took care of me. I don’t know if I would have been here. It was tough for a 12-year-old,” he said.

Keith Ritchie returned to school after 18 months and graduated in 1981. He won a multimillion-dollar settlement in a lawsuit with the club and the property owner. He used the money to hire a full-time nurse and bought a house in San Diego, where he was a student at San Diego State University, studying psychology with the goal of helping kids overcome hardships and disabilities as he had.

Eight years after he was paralyzed, Ritchie died due to complications from the accident. His brother said the family knew it was coming because Ritchie had started dropping classes and getting sick more often. While it was hard to lose him, Kelly Ritchie said, they were happy he wasn’t suffering any longer. One of the first items in his will was a donation to Calabasas High School, which was used to update the stadium that now bears his name.

“When somebody passes away, everybody says they were the nicest person in the world and everybody loved them, but that was definitely Keith,” Kelly Ritchie said. “He stayed the same after the accident. It took a little while, but props to him for that. That was the kind of kid he was. He was an all-around good kid that was in the wrong spot.”

Once in a pickle, community center appears poised for comebackFBI exhibit at Reagan Library will explore agency’s historyFond farewell to longtime teacher