Reign is over for haunted house 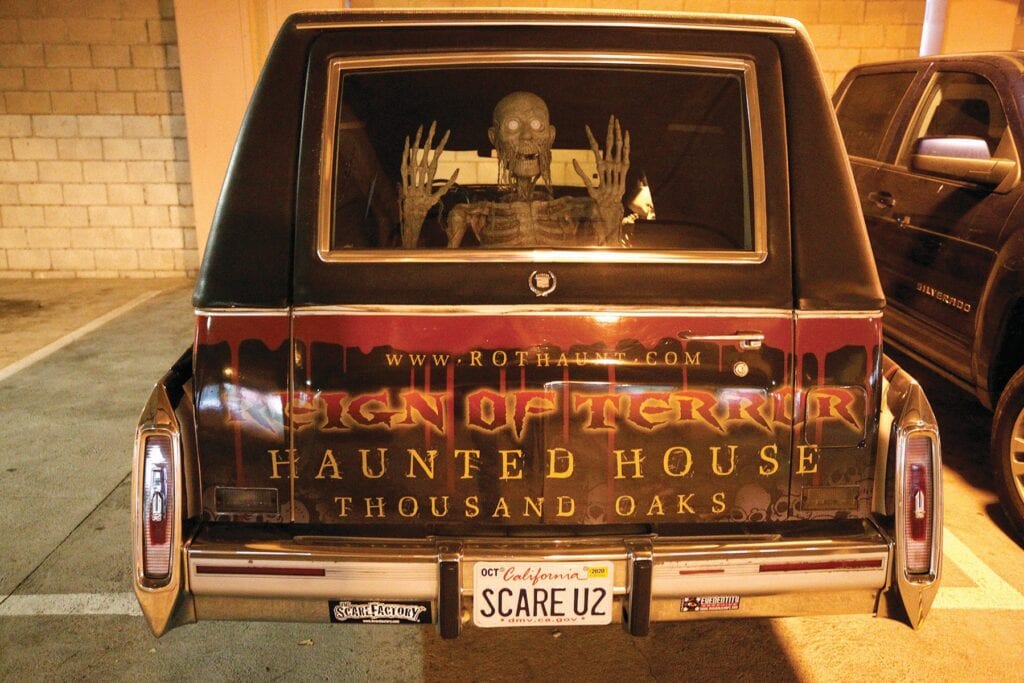 RIDE TO BOOT HILL—Reign of Terror, a haunted house attraction at the Janss mall, is closed this year due to the pandemic. RICHARD GILLARD/Acorn Newspapers

For the past decade, Bruce Stanton and his team have been raising money for the Conejo Recreation and Park District by scaring the bejesus out of people.

Stanton runs the Reign of Terror haunted house, known affectionately as ROT. He created the scream-inducing attraction at his home and it became so popular that he moved the mayhem to the Hillcrest Center of the Arts before finally putting down roots at Janss Marketplace in 2010. In the decade since, he’s donated around $350,000 to CRPD.

This year will be different.

There will be no spine-chilling Halloween fun this month, no meandering maze of spooks and scares to explore. The haunted house that annually attracts thousands has been bowed by something far scarier: COVID-19.

In a Halloween guidance issued Sept. 16 by Ventura County Public Health Officer Dr. Robert Levin, the county prohibited a number of Halloween-themed events, including parties and other gatherings with people outside of a household, carnivals, festivals and haunted houses.

With his fright fest put on indefinite hold, Stanton will be unable to raise funds for CRPD this year. It’s a shame, because he had to spend considerable time and effort moving equipment and props from the spot above Gold’s Gym where Reign of Terror had been located to its new home in the former Marshall’s building at the Janss mall.

The lost funds will be missed. Traditionally, CRPD splits Stanton’s $40,000 to $60,000 annual donation between the Thousand Oaks Teen Center and the Hillcrest Center, where the money helps support the annual teen summer musical and the Conejo Theatre for Everyone program.

While those centers may have to cut back without the donation, they’ll manage, Recreation Supervisor Melissa Ruwhiu said.

“It’s a chunk of change that we do rely on,” Ruwhiu said. “We use the money to pay for the rights to a show . . . and with Theatre for Everyone, we pay for therapeutic specialists for the actors.”

CRPD isn’t the only entity to benefit from Reign of Terror. So, too, do the other businesses at the Janss mall.

“October, entirely because of Reign of Terror, is our busiest time of the year,” said Tyrone Knox, owner of Sunset Terrace restaurant/bar. “Every Saturday and Sunday night, it brings over 1,000 guests.”

Often, groups will stop by his establishment for a drink, head over to the haunted house and then come back for dinner, Knox said.

He’s frustrated, he said, because the county is not willing to consider such attractions on a case-by-case basis.

“They were going to do all ticket sales online, they were going to do it with no actors, socially distance, require people to wear masks and only have someone taking tickets,” Knox said. “Bruce is an entirely selfless guy who gives it all to park and rec and to compare him to a bowling alley, it’s just crap.”

Stanton declined to comment on the county’s decision, but noted that Reign of Terror generally doesn’t put large groups of people through the maze at one time.

“Social distancing is something we’ve kind of been doing for a while,” he said.

Though he’s had to cancel this year’s event, Stanton takes solace in the fact the county this week moved forward a level in the state’s tiered COVID recovery system. When the county reaches a point where family entertainment centers can reopen, that’s what Stanton plans to do.

“If it’s Christmas time, we’ll open then. If it’s February, that’s when we’ll open,” he said.

Hopefully, it will be soon enough to help cover lease fees. With Reign of Terror’s move came a new lease, one that will cost the attraction somewhere in the neighborhood of $70,000 annually.

Will the attraction be able to make rent?

In the meantime, he and his wife, Mary, are free on Oct. 31 for the first time in many years.

What will the king of Halloween be doing?

“We are probably going to pass out candy, which we haven’t been able to do in a long time,” he said.

More From Business Go To The Business Section