Rebecca Grossman out on bail

The Conejo Valley community remains deeply in shock after two boys were killed Tuesday evening trying to cross the street with their family in Westlake Village. New details about the case will likely raise eyebrows further. 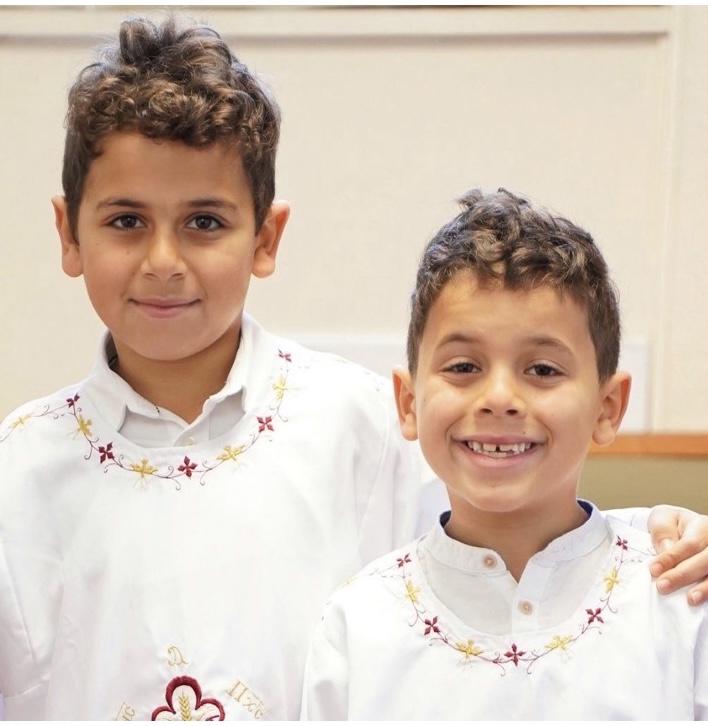 ASKING FOR PRAYERS—Eleven-year-old Mark and 8-year-old Jacob Iskander died Tuesday night after being struck by an car in a crosswalk in Westlake Village. They were out for a family stroll with their parents and two siblings. The driver of the vehicle that hit them has been arrested on suspicion of vehicular manslaughter. Photo posted to The Acorn Facebook page by Shannon Haroutunian

The driver of the vehicle who hit them, Rebecca Gray Grossman, 57, of Hidden Hills was arrested on suspicion of vehicular manslaughter and driving under the influence. She’s also been accused of fleeing the scene of an accident, Lost Hills Sheriff’s Capt. Chuck Becerra told The Acorn.

Becerra denied reports that Grossman’s Mercedes carried one of the child victims on the hood of the car and subsequently ran him over before later coming to a stop.

Grossman was out on $2-million bail early Thursday morning.

Mark Iskander, 11, was pronounced dead at the scene. His brother Jacob, 8, was transported to Los Robles Regional Medical Center and died several hours later despite the life-saving efforts of hospital staff. The rest of the six-member family escaped injury, the police saying the parents were able to save two of their children by pulling them back to the curb in time while on the crosswalk at the intersection of Triunfo Canyon Road and Saddle Mountain Drive where the incident occurred.

The Acorn learned the boys’ identity from mourners who gathered Wednesday night at the scene of the deadly event. Many belonged to the same church the Westlake Village family attended, Archangel Michael Coptic Orthodox Church in Simi Valley, and came to pray and mourn the loss of two of their own. The boys were deacons at the church.

Mark was a sixth-grader at Oaks Christian School in Westlake Village. The school cancelled classes Thursday and Friday after learning about the tragedy.

On The Acorn’s Facebook page, Shannon Haroutunian wrote: “The family is only asking for prayer at this moment. Pray for Mark and Jacob.”

Emad Ibrahim of Simi Valley met the family through the Archangel Michael Coptic church nine years ago. Ibrahim said he and the rest of the congregation heard the news Wednesday morning from their priest. His oldest son is the same age as Mark Iskander, and he said the two boys were close friends.

“I was shocked. . .  My son was there with me and he heard (the news) and he started crying. At 11 it’s really hard—I didn’t think he’d really understand, but he was heartbroken,” Ibrahim said. “He was asking, ‘I’m not going to see Mark? I’m not going to play with Mark?’ It was difficult. You can only imagine what their family is going through.”

The incident occurred at 7:10 p.m. Sept. 29, 30 minutes after sunset, at the intersection just south of Westlake Lake. In photos taken at the crash site, a child’s scooter could be seen lying at the intersection’s crosswalk and a helmet with roller blades on a sidewalk nearby.

Grossman was held on $2-million bail at a facility in Lynwood, the sheriff’s department said. She made bail and was released.

Each charge of vehicular manslaughter carries a possible sentence of up to six years in prison.

Grossman is the founder and chair of the Grossman Burn Foundation, a Calabasas-based nonprofit organization that offers burn prevention education and services to communities, according to the organization’s website. The foundation is associated with the Grossman Burn Centers, a network of facilities in California and Missouri founded by the late Dr. Richard Grossman, her father-in-law, in 1969. 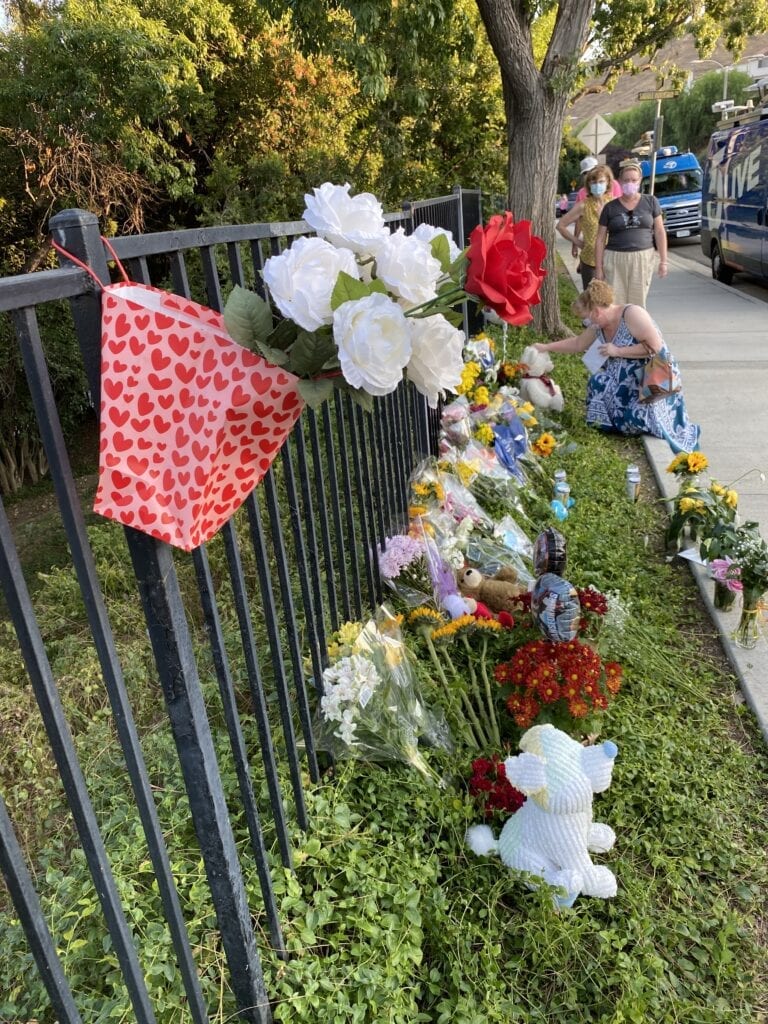 For many years Rebecca Grossman was the publisher and editor-in-chief of Westlake Magazine; she remains a contributor. According to the magazine’s website, she launched West Luxury Magazine and Paragon Healthy Lifestyle Magazines in 2016 and is the CEO of Powerhouse Lux Media, Inc. and Day In The Life Apps, a mobile application development company.

Authorities said Wednesday they believe alcohol played a role in the crash. It’s unclear where Grossman was coming from at the time of the wreck. There had been reports of street racing at the same time of the collision but police have never confirmed that detail.

Grossman was taken to the sheriff’s Century Regional Detention Facility in Lynwood where she later made bail. She’s due to come before a judge Wed., Oct. 21 in Los Angeles County Superior Court-San Fernando.

For several years, residents in the area have raised concerns about the crosswalk where the collision occurred. The road is painted, but there are no lights, stop signs or traffic signals to warn drivers when pedestrians are in the road.

Melissa Wolfson, a resident of the nearby Parkwood Estates, said she spoke previously to the Westlake Village City Council about the need for a light at the four-lane crosswalk but nothing became of her request. The posted speed limit is 45 mph. 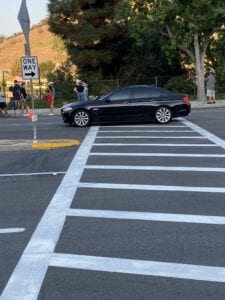 INTERSECTION—A crosswalk where the accident occurred has visible signage but no stop light on flashing lights. That portion of Triunfo Canyon Road is four lanes wide. The speed limit is 45 mph. JOHN LOESING/Acorn  Newspapers

“It’s very dark (on the street). I called the city about six years ago saying we needed lights or something there. We wanted to get lights like there are at the crosswalks on Lindero Canyon Road (and Middlegate Road) but the city said they’d been discontinued and there was no money,” Wolfson said.

“I asked why we didn’t have anything at our crosswalk and they said, statistically speaking, nothing happens or was going to happen there. They said you could walk down to Lindero Canyon Road and Triunfo Canyon Road and cross there.”

She said she’s had her own close calls while at the Saddle Mountain Drive crosswalk, and knows other residents who claim to have nearly been struck there. Wolfson said she left a message for Mark Wessel, the city’s traffic engineer, on Wednesday morning following the accident.

“A lot of us have been trying to do something. People don’t stop there,” Wolfson said. “It’s a 45 mph zone but everyone speeds there. It’s like crossing a freeway.”

A GoFundMe page has been set up in honor of Mark and Jacob. The money will all be donated to a charity to be determined by the Iskander family. As of Monday afternoon, there was over $25,000 in donations. Anyone wishing to donate can do so at the link below:

Kyle Jorrey and John Loesing contributed to this story. Updates are being made.