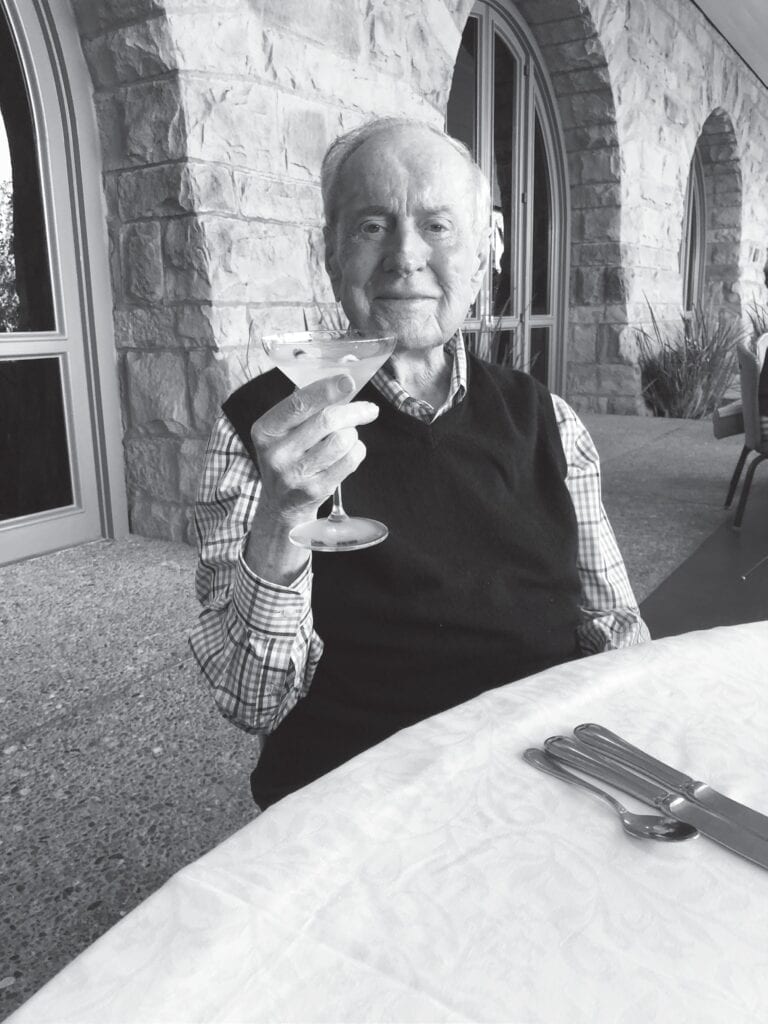 Paul E. Griffin, Jr. was a devoted husband, father, grandfather and great grandfather who led his family with his example of faith, provided for his family through his real estate development business, demonstrated great charity for others, and was loved by many.

A native Californian, Paul was born on June 7, 1930 to Paul Sr. and Thelma. He is survived by his brothers, Dale and Steve, with whom he maintained a close relationship. Paul grew up riding his horse, Silver, around the citrus orchards in the San Fernando Valley. He spoke often of these memories in recent years. He played football at Van Nuys High School. There he met Gloria, the love of his life, and found lifelong friends in her brothers, John, Denis and Gary.

He attended UCLA, where he graduated in 1953 as an engineering major. He married Gloria on her 18th birthday, December 16, 1950. They celebrated their 70th wedding anniversary this last December. Together they had eight children (Kathleen, Kristene, Paul, David, Gregory, Diane, John and Matthew.) They have 22 grandchildren and 12 great-grandchildren.

Paul began his career in 1954 after returning home from Korea, where he served as a Communications Officer in the U.S. Air Force.

He was the fourth generation of the Griffin family to be involved in the home building industry in Southern California since 1903. He became President of Griffin Homes in 1966. Under his leadership, the company grew into one of the largest and most prestigious home building organizations in California because of superior architectural innovation, quality assurance and customer service. In his career, Paul oversaw the building of over 30,000 homes.

Paul’s success was anchored by a firm commitment to his values, which could be seen at every level of the business, from the way he treated the thousands of people who worked on his projects, to the way he designed his developments for future residents, to the charitable ways he deployed the fruits of his business. Long before environmental issues became a public concern, Paul worked to develop new neighborhoods that conserved and complemented the area’s natural resources. More than anything, however, people mattered to Paul. Despite his great accomplishments, Paul had a graciousness that drove him to recognize others before himself. Those who worked with him held him in high regard, personally and professionally.

One of the ways Paul gave back was through committed service to his alma mater, UCLA. Paul was a member of the UCLA Board of Visitors and a major donor to the UCLA Medical Center. He and Gloria endowed a chair in Moral Philosophy at UCLA, made a major gift for the construction of the Newman Center and were the primary benefactors in building the UCLA Athletic Hall of Fame. He was instrumental in getting the UCLA football program moved from the Colosseum to the Rose Bowl in Pasadena. He endowed a scholarship for rising real estate entrepreneurs at the UCLA Anderson

School of Management and remained active with the Provost’s office there. He received the UCLA University Service Award in 1984, was UCLA Alumnus of the Year Award in 1988 and Chairman of the UCLA Foundation’s Board of Trustees from 1988 to 1990.

Paul retired from homebuilding in 1992. He and Gloria moved to Padaro Lane in 1997, where they enjoyed making new friends in the Santa Barbara area and continued their involvement with several religious and charitable organizations. These include Legatus, their local parishes (Our Lady of Mount Carmel and Our Lady of Sorrows) and the Archdiocese of Los Angeles. He was a Knight of Malta and a Knight of Saint Gregory, one of the highest honors the Catholic Church can bestow on a layman.

Paul is succeeded in his business by Paul E. Griffin III, CEO of Griffin Living, and Matthew Griffin, SVP of the Eastern States Division. His son, John Griffin, owns and operates a home building company in Northern California. Griffin Living builds and operates luxury senior living projects throughout America under its Varenita brand.

Paul loved traveling with Gloria, spending time with his children, his brothers Dale and Steve, his grandchildren and his great grandchildren. He enjoyed hiking, golfing, fishing, sailing and scuba diving.

Paul had a love for God that guided him throughout his life. He spoke of wanting to be at home with his heavenly Father, setting an example of faith and trust for his whole family. He passed surrounded by his wife, children and many of his grandchildren, who miss him, cherish his memory and pray for him.