Party of five: Everyone’s in the hunt

All five teams expect to contend for Marmonte title 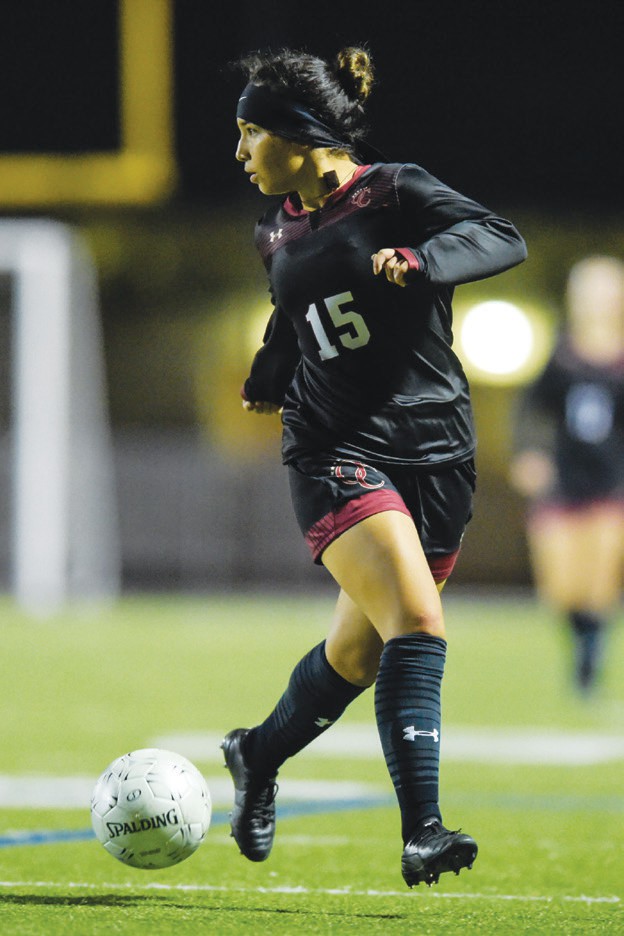 Westlake and Oaks Christian, each of which has claimed a league title within the past three seasons, have struggled early. Thousand Oaks and Calabasas are off to hot starts.

The Coyotes (2-1 overall at press time) outscored foes 7-3 through their first three matches.

Kylie Kurzban, another sophomore, is seeing her first varsity action after missing all of her freshman year with an ACL injury.

Carly Lipschitz, a senior midfielder, is back in a Coyote jersey after playing in the U.S. Girls’ Soccer Development Academy last year. She frequented the Calabasas starting lineup as a freshman and sophomore.

“When she texted me in August and said she wanted to play, I was super excited,” head coach Brian Collins said of Lipschitz. “She’s been a nice addition to our team. She’s a great player.”

Calabasas is looking forward to the challenge in league.

“We’re going to go out there and do our best and see where we end up,” the coach said.

It’s early, but the Lions are already dealing with the injury bug.

“We’re really thin,” head coach Sebastian Alvarado said. “We have some girls banged up coming off their club season.”

Oaks Christian (2-2 overall at press time) picked up wins against Moorpark and South Pasadena but fell flat in losses to Buena and Agoura.

The Lions will try to get back on the winning track at 6:15 p.m. Dec. 13 at home against Camarillo.

Standouts Sophia Prudholme, a junior midfielder, and Alyson Choi, a senior goalkeeper, are expected to return from injuries, the coach said. Isabela Jimenez, a senior softball player, has filled in at goalie.

Grace Sangster, a midfielder, is also an experienced senior.

Yzabel Melgoza, a sophomore, shoots her shots at forward.

Alessandra Nepa, a senior, and Nathalie Garcia, a junior, bolster the defense.

Oaks Christian, which lost to Moorpark in the first round of the Division 2 playoffs last winter, graduated seven seniors in the spring.

Head coach Frank Marino is working to right the proverbial ship at Westlake.

The Warriors (1-4 overall at press time) suffered one-goal setbacks against Oak Park, Simi Valley and Moorpark before getting routed by Buena 4-0 on Dec. 7.

Westlake, which is playing without injured star Sydney Sharts, picked up its first win, 4-1, against Fillmore on Dec. 9. Sharts, a senior who signed a scholarship with Oklahoma, will miss the entire season.

“We just need some confidence,” Marino said. “I think we’ll be competitive. We have a good group, but we have a lot of new players. It’s just going to take a little bit of time.”

Shelby Tilton, a senior who committed to the USC women’s lacrosse team, and sophomore Lily Berlinger power the offense. Penny Smith, a senior Alabama commit who missed the last two prep seasons while playing in the academy, is back bolstering the attack.

This year, “Chava” is at the helm, and he has high hopes for the Panthers.

“We’ll be able to finish in the top-three,” he said. “The girls are very motivated.”

Newbury Park (1-0 overall), which beat Pacifica 4-0 in the season opener Nov. 20, will compete in a tournament in Redondo Beach this weekend before traveling to battle Hart on Dec. 16. The Cats reached the CIF-Southern Section Division 2 playoff quarterfinals last season.

Sydney Leff, a senior who had a hat trick in the Panthers’ victory over Pacifica, and Summer Warner, a fellow senior, start at forward.

Lauren Mesko, a senior, and Bella Caloroso, a junior, control the pace at midfield.

“She had one of the biggest impacts on the team last year as a junior,” Orozco said.

“We’re really undecided on going to take on that starting position,” Orozco said.

“This year, we’re in the running to win the Marmonte League, and I think the girls believe that,” Cameron said. “They know the talent we have this year. They’re looking around at schools and they know a lot of those players. They feel like we can compete with everyone. We’re trying to win the league.”

Kiana Porter, a freshman defender and Aaliyah’s younger sister, is a rookie to watch.

“We’ve got a pretty good team this year,” Cameron said. “We’ve just got to put stuff together.”