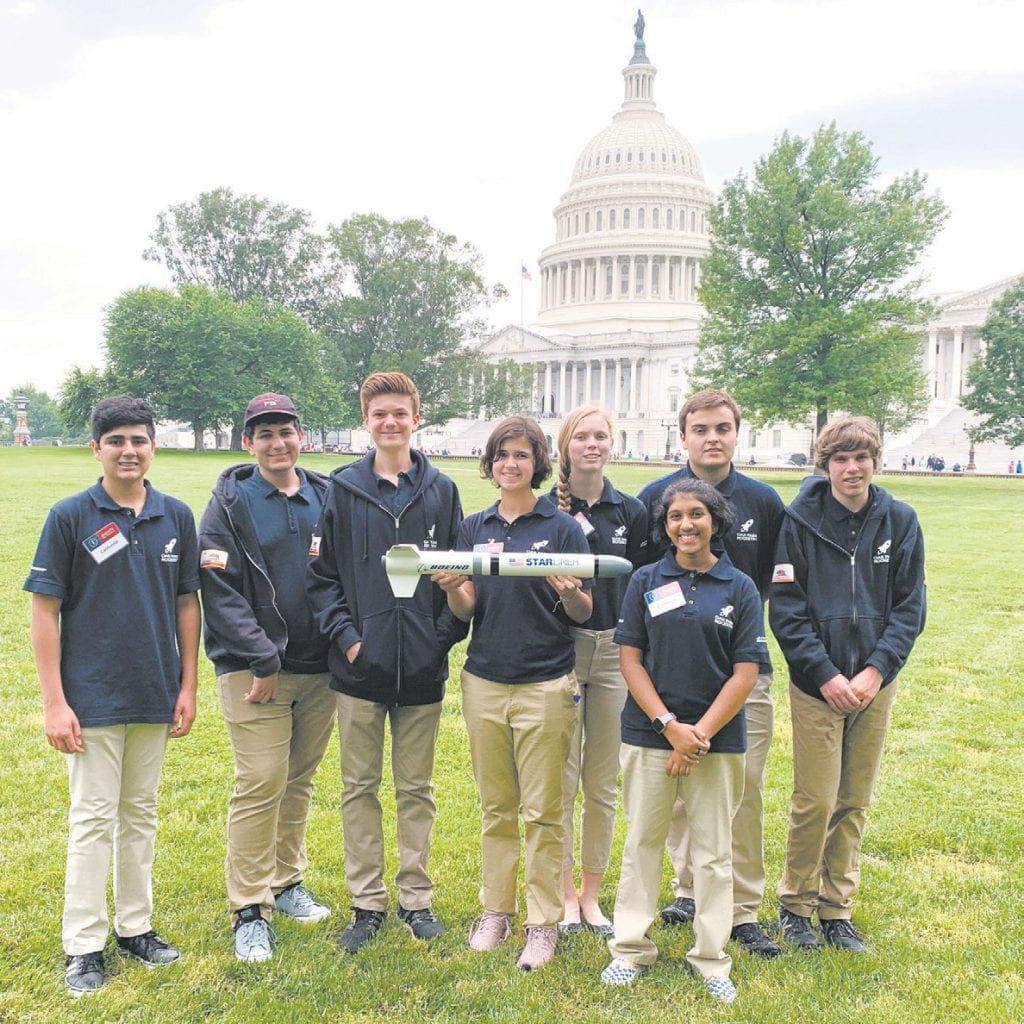 The Oak Park High School Aviation and Rocket team reached for the stars when it competed in the Team America Rocketry Challenge, a national competition, on May 18 in The Plains, Va.

Seven teams in Southern California were among the 101 national finalists in the challenge, which was sponsored by the Aerospace Industries Association.

Tony Knight, superintendent of Oak Park Unified School District, attended the event and announced that the OPHS team won two $500 prizes—First Place in Presentation and First Place in Outreach. The team came in 21st overall for its rocket flight.

“Due to this, the team has been invited to participate in the NASA Student Launch Initiative for the next school year,” Knight said. “The program involves designing and building a large high-power rocket under the direction and supervision of NASA engineers over the course of the year. It culminates in the team launching the rocket at the NASA Marshall Space Flight Center in Huntsville, Ala., in April 2020.”

Team members talked about how the club is more than just fun and games.

“TARC (Team America Rocketry Challenge) has provided me with an opportunity to learn things I could never learn in the classroom,” Charlie said. “From recording and analyzing data to arming the rocket for launches, to designing and building the final product, the practical and problem solving skills I’ve learned by participating in rocketry this year will help me for the rest of my life and career.”

Andrew said he’s been able to “befriend, teach and work with quite a few people this year as president of the club. I’m thrilled to have led a team to finals again as this is my senior year.”

“The National Fly Off . . . was special in that the event was dedicated to the 50th anniversary of the Apollo 11 mission that culminated in the landing on the moon on July 20, 1969,” Knight said. “In honor of that, the Oak Park team dressed in vintage 1969 Mission Control outfits complete with short-sleeved white shirts and skinny ties.”

Lewis Lowe is the communications director for Federal Affairs in Washington, D.C. He works with the Aerospace Industries Association, the organization that hosts the Team America Rocketry Challenge. Lowe said the Oak Park team was among 101 finalists out of 830 teams that entered the competition from 46 states, the District of Columbia and the U.S. Virgin Islands.

“The competition . . . requires a team to launch a rocket carrying three raw eggs that must reach an altitude of at least 856 feet before separating and returning the uncracked eggs to earth—all within 43 and 46 seconds and with strict height and weight requirements,” Lowe said.

Over the course of the school year, the Oak Park team participates in an outreach program, which included presenting information at the California State STEAM (science, technology, engineering, art, math) Conference in Long Beach and helping students build rockets at the Wings Over Camarillo Air Show.

“They did an amazing job in their work this year, and the presentation they gave at the finals was over the top,” Knight said.