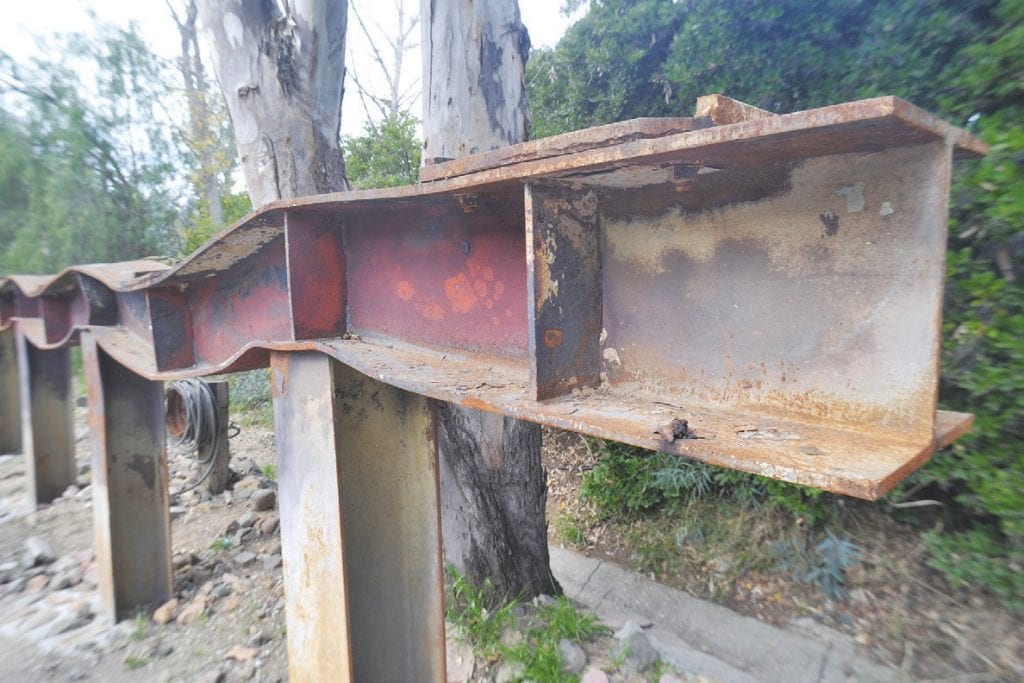 ACROSS TROUBLED WATERS—Right, officials break ground Jan. 11 on the $7-million bridge near Mulholland Highway and Troutdale Drive. A temporary structure is behind them. The previous bridge burned in the 2018 Woolsey fire and a remnant piece of steel, shown above, stands at the nearby Old Place restaurant in Cornell as a reminder of the tragedy.

County, state and federal government officials broke ground Jan. 11 on the construction of a new bridge near Mulholland Highway and Troutdale Drive. The structure was destroyed by the Woolsey fire in November 2018.

A temporary single-lane bridge was erected alongside the ruined bridge. Traffic must use the temporary bridge while crews build the replacement, expected to cost $7 million

“The work’s been done in record time, but it might not seem like it, in terms of getting all the different jurisdictions on board,” Los Angeles County Supervisor Sheila Kuehl said at last week’s ceremony. “I want to express my gratitude to the community for their patience. It’s one thing to have a plan, it’s another to fund and execute it.”

The project is being paid for with one-time federal funds secured by U.S. Rep. Ted Lieu, the California Department of Transportation, and the Federal Highway Administration. 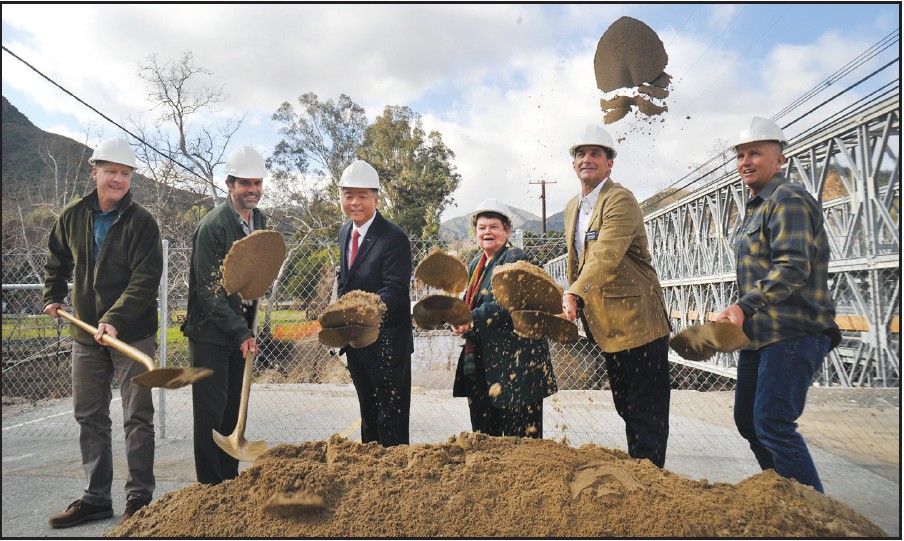 Photos by JOSEPH A. GARCIA/Acorn Newspapers

Mark Pestrella, the department’s director, said the new bridge will be a symbol of the community’s resilience in the face of adversity.

“This is going to be a new, two-lane steel truss bridge, which will reduce the commute times for residents and restore the ability to exit the area in a safe manner in the event we have another emergency situation,” Pestrella said.

“Public works began meeting with the community right after the fire subsided, and that engagement will continue throughout construction.”

Morgan Runyon, the owner of the Old Place restaurant located near the bridge, defended his business from the flames that took down the bridge. He described the big fire of 2018 as a “surreal experience.”

He said the threat of fire is part of the cycle of living in the Santa Monica Mountains.

“Having this bridge for the last 50 years or so, you take it for granted. Many in our community lost more than a bridge—they lost lifetimes, memories, it was gone in a day,” Runyon said.

“We all have milestones in our own post-fire recovery, and the new bridge is a key part of that as we all move forward. It’s our responsibility to teach what we’ve learned from this experience and grow stronger as a community.”

The Mulholland bridge wasn’t the only one destroyed by the fire. A smaller bridge on Chesebro Road in Agoura Hills also fell to the flames.

That bridge, which had stood for 70 years, was replaced in May at a cost of $1.5 million.