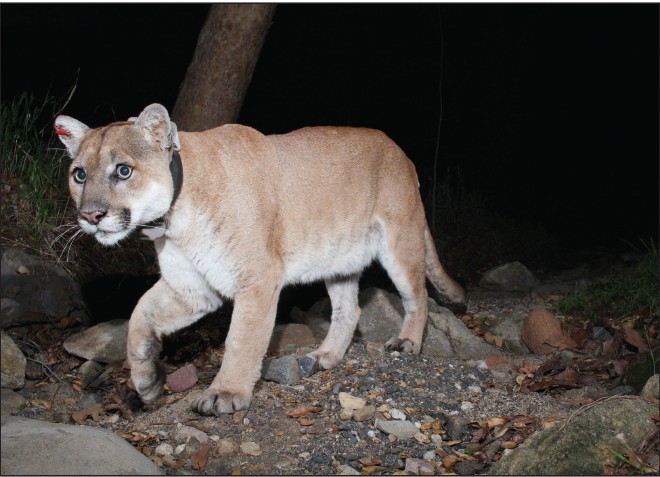 NO-MATE FATE—The subject of the documentaryfilm“The Cat That Changed America,”P-22 roams Griffith Park in Los Angeles, where he is trapped by freeways and urbanization. He is unlikely tofind a mate. Courtesy photo

P-22 is getting far more than just 15 minutes of fame. The mountain lion living in Los Angeles’ Griffith Park is the subject of a new documentary called “The Cat That Changed America,” which was shown at the Thousand Oaks Civic Arts Plaza on Monday night.

“The Cat That Changed America” takes a look at P-22’s unique life, starting with his birth in the Santa Monica Mountains. The cougar crossed two busy freeways, the 101 and the 405, before settling in Griffith Park, where he remains trapped, hemmed in by the freeways and urban sprawl.

If he stays in Griffith Park it’s unlikely he will ever find a mate and reproduce, a vital step in helping the dwindling population of mountain lions in the Santa Monica Mountains.

The cougar’s presence in the heart of a major urban city has made him a prime example of the effects of urbanization encroaching on wildlands, all of which is captured in the documentary.

The screening was presented by the City of Thousand Oaks and the office of Ventura County Supervisor Linda Parks.

Parks said the film does a good job explaining the big issues facing P-22 and the rest of the Santa Monica Mountains cougar population.

“(Their habitat) is being encroached by urbanization, and the issue of poisons, the anticoagulant rodenticides that are poisoning the mountain lions,” Parks said. “The poisons are very widespread. Humans can change that behavior, and it will help the health of mountain lions but also all the creatures out near the Santa Monica Mountains because so many of them have this poison in them.”

When P-22 made his home in Griffith Park it caught the attention of the city, and the big cat became the face of the preservation movement. Trapped in the 8-square-mile park, P-22 drew attention to the impact freeways have on genetic diversity of species in the area, which created a swell of support for the Liberty Canyon Wildlife Crossing.

The crossing would allow animals trapped on the south side of the 101 Freeway to access the Simi Hills on the other side, increasing their chances of finding a mate and reproducing.

The bridge would be built near the Liberty Canyon exit, as that stretch of freeway runs alongside last 1,600 feet of space that hasn’t been developed and offers access to open space that doesn’t border homes or developments.

The $60-million project is being overseen be the California Department of Transportation.

Beth Pratt-Bergstrom, California director of the National Wildlife Federation, has been helping raise funds for the project for several years and said it’s closer to being built than ever before.

“The environmental assessment is just about to be completed.

Caltrans had to lay the ground for how the bridge was going to impact the environment. That should be finalized in January,” Pratt- Bergstrom said. “They’re then going to move into final design and engineering, so the project gets what they call ‘shovel ready,’ and at that point we move into the construction phase. If we stay on track with fundraising it will be built by 2022.”

“ The Cat That Changed America” has been shown to audiences around the country and helped raise support for the wildlife crossing. Pratt-Bergtstrom said it’s created strong grass-roots support, which has translated into donations for the crossing.