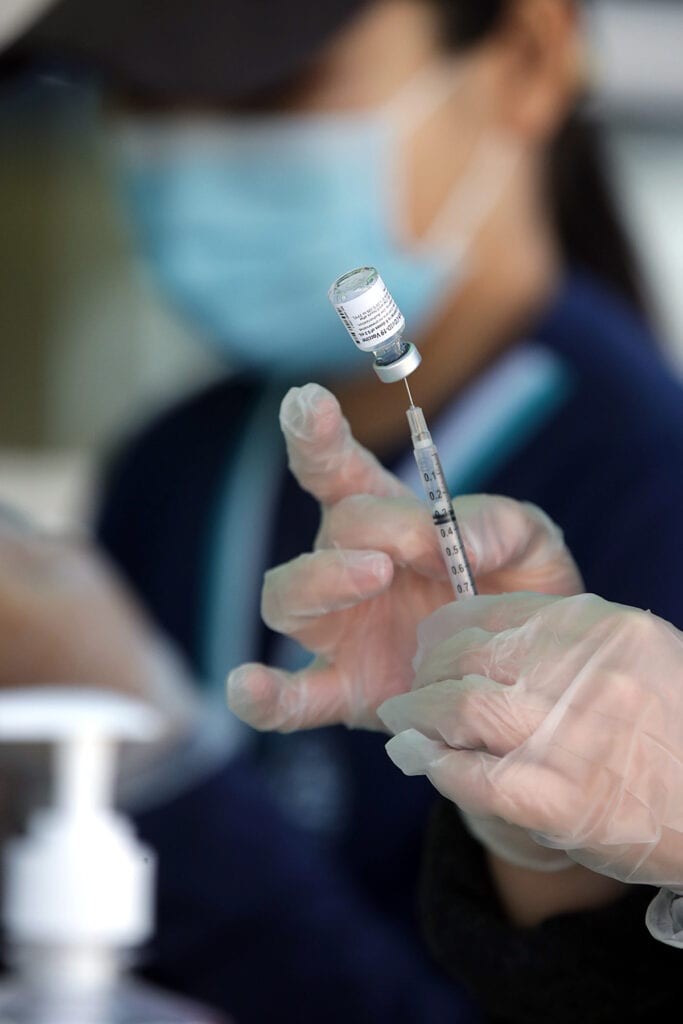 Los Angeles County continued its extraordinary transformation as one of the nation’s hardest hit areas during the pandemic to one of the safest following an announcement Tuesday by health officials that the area is moving into the least restrictive yellow tier for business reopenings.

A move from orange to yellow tiers in the state’s pandemic recovery blueprint means capacity will increase in a wide variety of business and social settings, including private gatherings and celebrations. Bars are able to open indoors at 25% maximum capacity with safeguards, the Los Angeles County Department of Public Health said. The new health order goes into effect Thurs., May 6.

As of April 30, more than 8 million doses of COVID-19 vaccine had been administered to people across the county, a factor greatly contributing to the area’s low infection rate, health officials said. Monday, the county reported no new deaths from the virus and a daily test positivity rate of only .7%, a remarkable turnaround from dark days of the pandemic in January when almost one in five people were testing positive for the disease.

“This has been a long and difficult journey and we are so heartened to arrive at this latest milestone . . . one that is guided by hope rather than fear,” the county board of supervisors said in a joint statement. “This new tier matches the sunny optimism of the season. Now it’s up to all of us to keep up the good work. It’s never been easier to get vaccinated.”

Gov. Gavin Newsom has announced plans to fully reopen California’s economy by June 15 if two conditions are met: there are enough vaccines for anyone 16 and older who wants one, and hospitalization rates remain stable and low.

With Newsom’s announcement looming, local leaders are starting to discuss what the coming months will look like. One of the biggest changes: City halls will reopen to the public.

City employees in Calabasas have already returned to work at the library, the Tennis and Swim Center and City Hall. Westlake Village City Manager Rob De Geus said his city is      “tentatively planning” to reopen City Hall in June for modified in-person services, including a return to in-person City Council meetings. Agoura Hills city employees have already returned to office work, and staff is planning to reopen the public library the first week in June.

City Manager Nathan Hamburger said Agoura Hills will continue to work with local businesses in the effort to fully extricate them from the pandemic.

“We’re extending outdoor operating permits until the end of June, and we’ll continue to discuss that if necessary,” Hamburger said. “Some people will feel comfortable eating inside and some will still want to be outside. We’re talking about putting together an education campaign to let people know what’s available, what’s open, to encourage them to visit local businesses,” he said.

City staff in Calabasas has also returned to in-person work. City Manager Kindon Meik said he and his managers are working on a plan that will put employees back in front of the public soon.

“The discussion is what does City Hall look like, especially with the planning and building departments, what’s going to be the demand on counter staff?” Meik said. “We don’t have anything set yet, but we’re discussing it. Our next goal is to start drafting out a plan for reopening to the public.”

Calabasas was one of the only cities in the region to set its own mask mandate. The City Council voted last July to impose a $100 fine for anyone in the city refusing to wear a face mask in public. Newsom’s June reopening makes no mention of a plan to lift mask restrictions, and it remains to be seen if Calabasas will continue to enforce its own mask mandate. The national Centers for Disease Control has already said masks are not necessary in a safe outdoor setting.

The local cities are also making plans on what to do with the federal stimulus money they’re received. Payments will be spread across two years, with the first expected to be delivered in June.

Westlake Village is projected to receive $1.5 million, and Hamburger said Agoura Hills is in the early stages of determining the best way to use the $3.8 million it is planning to receive.

“My understanding is the money can backfill for lost revenue. You can use it for infrastructure. I think broadband is called out. . . . The only restriction I recall is you can’t use it for pension costs,” Hamburger said. “I think we’ll still anticipate some shortfalls this year, with the hotels and retail and restaurants down (in revenue). We’re going to talk about it at our May 12 workshop.”

Calabasas hopes to collect almost $4.5 million. Meik said there are several conversations about the best ways to use the money, including bolstering the Calabasas Chamber of Commerce, and using the money as hero pay for essential workers.

Calabasas and Agoura Hills are also discussing putting some of their stimulus money into reopening the jointly owned Agoura Hills/Calabasas Community Center, which has been closed since the start of the pandemic.

John Loesing contributed to this story.