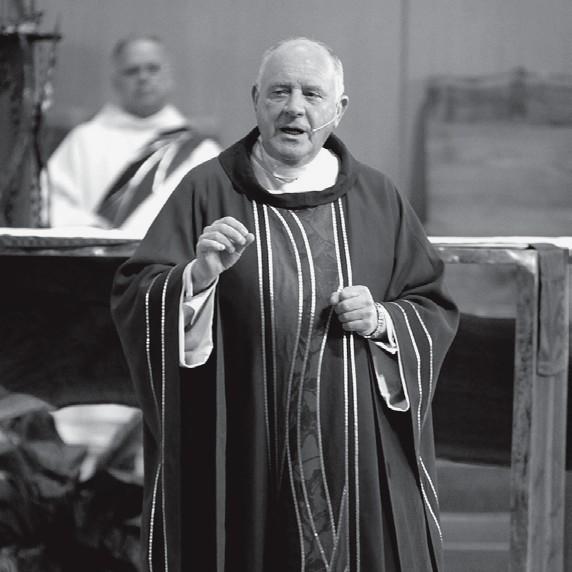 A momentous occurrence in the Catholic Church, one that hasn’t happened in nearly 600 years, will have long-lasting effects on the religious community, according to local priests.

On Feb. 28 at 8 p.m. in Vatican City, Pope Benedict XVI will step down from his post as the spiritual leader of more than a billion Catholics worldwide.

The resignation on Feb. 11 of the 265th pope, who succeeded the late John Paul II in 2005, broke a tradition intact for almost six centuries. Pope Gregory XII abdicated in 1415 when there was a second claim to the papal seat.

Monsignor Craig Cox, president of St. John’s Seminary in Camarillo, said the decision “came out of the blue.”

“I was absolutely amazed,” he said. “I really admire him for taking the initiative and doing something—while not totally unprecedented—unprecedented for centuries. It’s likely to not be centuries more until this happens again.”

The Rev. Jarlath Dolan, pastor of St. Maximilian Kolbe Catholic Church in Westlake Village, said the move also surprised him even though Benedict, who will turn 86 in April, appears physically weak.

“Just observing him, it’s obvious he’s elderly and he’s in frail health,” Dolan said. “Personally I admire him for stepping up and facing the reality after much prayer and meditation that he is not able to carry out his duties and obligations as the Holy Father. It’s an expression of his humility.”

Dolan said the pope’s resignation for health reasons “opens that possibility for other popes.” Asked if the decision also opens the door for future popes to be asked to resign, Dolan said, “Theoretically yes; practically I don’t think that’s going to happen.”

The rare event also creates unanswered questions, such as how to refer to a living ex-pope and what his role in the church will be, Cox said.

“It’s a very exciting historic time. New developments will take place as part of this that we will be privileged to witness.”

The transition will immediately affect the liturgy during Mass, when congregants pray for the pope by name.

Other changes to the largest Christian church in the world will come slowly, Cox said.

“It takes time for the pope’s leadership to have an impact and spread. Eventually it will. What that will be and how long it will take I don’t know,” he said.

Dolan said it was a surprise when Pope John XXIII convened the Second Vatican Council, which brought modernizing reforms to the church from 1962-65.

“It changed the nature of the church. What the next pope will do, I have no idea.”

Does he think change is necessary?

“Personally I’m happy with the church I know and serve,” Dolan said. “A certain percentage of people want something that is stable. They like things to be consistent. That’s not (always) the right thing. We’ll wait to see what happens. The vision of the next man will determine where we go and what we do.”

Cox said the church should become “internationalized” to include more bishops from outside of Europe in Vatican offices.

“Every pope brings certain gifts and perspectives rooted in who he is,” Cox said. “I do not expect (the next) pope to be a carbon copy of the current pope. There will be differences. Will they be monumental? I’m not expecting that. (But) change is always necessary.”

A successor is expected to be in place before Easter Sunday on March 31.

Both Mahoney and Rigali will participate in the process amid accusations that they did not do enough to protect victims of alleged sex abuse by priests in their former diocese.

The ballots will be mixed with chemicals and burned to produce black smoke through the chimney of the Sistine Chapel if no one has been elected with a twothirds majority vote. They will be burned alone to make white smoke if the next pontiff has been chosen.

By then, Benedict will have begun a secluded life of prayer and reflection. He will live in a papal villa outside of Rome before moving to a renovated monastery in the Vatican.

Among his legacies are his “profound and influential” writ- ings, Cox said.

Benedict wrote three bestselling “Jesus of Nazareth” books that Cox refers to in talks and at retreats.

The pope also collaborated with Vatican officials on lengthy encyclicals about charity (2005) and hope (2007).

“He says hope is the forgotten virtue in this age of disillusionment, of people being overwhelmed by financial distress,” Cox said.

While in Rome in the 1990s, both Cox and Dolan met then- Cardinal Joseph Ratzinger.

Cox was part of a group that had completed studies on canon law and met with the German clergyman and an English-speaking translator for nearly an hour.

“(Ratzinger) summarized the conversation beautifully,” Cox said. “It showed me how good a listener he was, how he could get right to the heart of things.”

Dolan, among a small group of priests who met the cardinal in 1994, said he seemed gracious and relaxed.

“We talked for a few moments, and he wished us luck and moved on.”

More From Faith Go To The Faith Section

Program on parenting ‘right-side-up’ kidsA look at Jewish values in civilizationMeditation for peace of mind, comfort