With Agoura Hills club mired in legal disputes, leadership team is thrown out 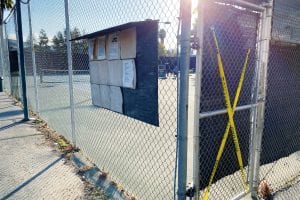 ON THE PROPERTY—Worried homeowners are concerned about the appearance of Lake Lindero tennis and swim club in Agoura Hills. Most vendors have abandon the club out of exasperation. A court ruling affirmed a new leadership team because the old one, the court said, “lost its way.”

An April 7 ruling by the California Superior Court in Van Nuys validates a new leadership team at the troubled Lake Lindero Home Owners Association and puts to an end much of the strife that has racked the Agoura Hills HOA for the past three years.

The ruling upholds the dismissal of Lake Lindero general manager Chris Barone in December 2019–and it affirms a recall election held in the same month that stripped authority from the board of directors he controlled.

The former board under Barone that fought to stay in power had “lost its way,” according to the ruling earlier this month by judge Shirley Watkins.

Lost Hills Sheriff’s deputies arrested Barone Feb. 12 for violating a temporary restraining order that required him to keep away from the tennis and swim club at Thousand Oaks Boulevard and Lake Lindero Drive.

Officials reported that following his ouster as manager, Barone had removed more than $200,000 from the HOA bank account and directed dues from the association’s 459 members be sent to his private home address.

Sandy Sandler of Westlake Village told The Acorn she was fired from her job at Union bank because of the incident, saying that she was “misled” by Barone that the withdrawal was authorized when it was not.

Barone was was also questioned by deputies for an alleged assault on club property in 2019.

“The former board abrogated its legal and fiscal responsibilities to Mr. Barone, who made decisions outside the inquisitive eyes of the association members, in secret, without accountability, about important decisions . . . with the transparency required by state law,” Watkins said.

The Lake Lindero association filed a sheriff’s report earlier this year against another former employee, Judee White, for alleged theft. The HOA said that White, who was fired as Barone’s administrative assistant last December, went to the club in January and demanded an employee hand over money from a cash drawer. When the employee declined the request White picked up the cash drawer and departed, the complaint said.

The events prompted the April 7 court ruling, which said Barone and White were “not credible,” and supports a new HOA board of directors under president Michael Allan.

“This is the beginning of a new chapter for the HOA that signifies the members finally being heard,” Allan said. “The community is the real winner. We are looking forward to the reopening of the facility to the members once the pandemic is deemed concluded.”

“I respect the tentative ruling of the court,” Barone told The Acorn, but said he believed the newspaper will not be able to “report the story objectively as it is false.”

While Lake Lindero still faces multiple lawsuits involving disgruntled vendors and the club’s former manager, David Smith—who sued the HOA over alleged breach of contract in 2017—the latest charge of election tampering and misappropriation of homeowner funds was resolved by this month’s court ruling.

“I couldn’t be happier,” said Barbara Biglow, a resident of the Lake Lindero neighborhood for 29 years. “. . . We can move forward.”
—Acorn staff report