In search of good surf 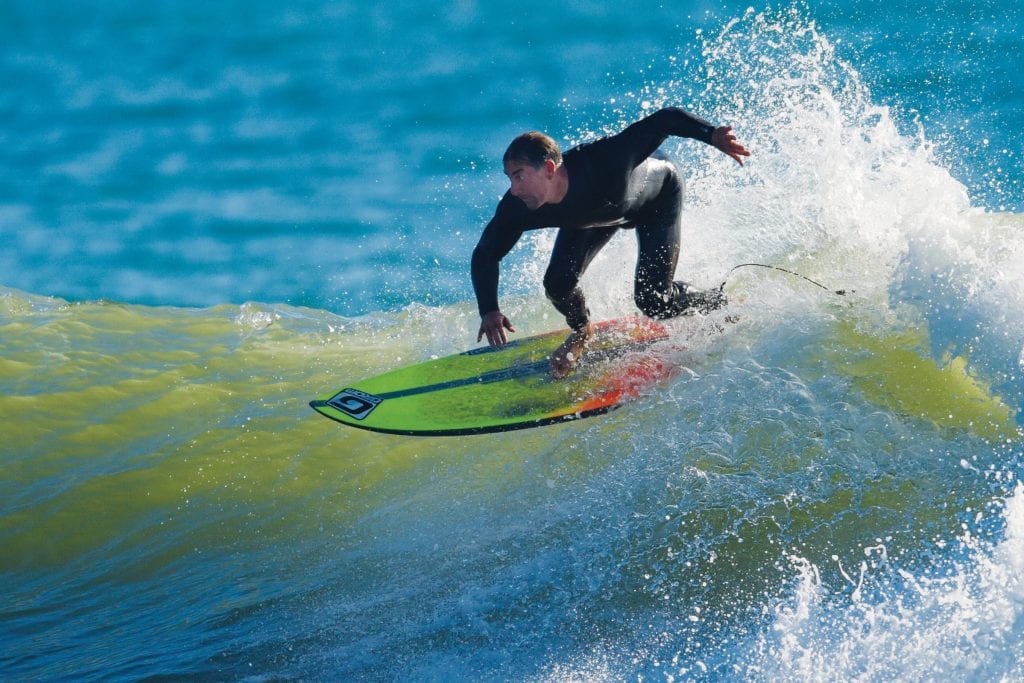 CATCHING A WAVE—At right, a surfer catches a ride Jan. 10 at Surfer’s Point in Ventura. CSUCI students are asking for surfers to report surf quality during the king tides in January and February. MICHAEL COONS/Acorn Newspapers

Her black curls still dripping from a morning surf session, Natasha Smith zipped up her wetsuit and grabbed her board, preparing to paddle back out to the cluster of surfers bobbing up and down on the winter swells.

The 30-year-old was at Surfer’s Point in Ventura. She travels up and down the coast between Ventura and San Clemente in a van with her dog, Stone, in search of good surf.

Before making the move out west, Smith lived on the East Coast—and she experienced firsthand the negative effects rising sea levels are having on the beaches there. She worries what could become of the West Coast waves she chases now.

“In Virginia, we’ve had a lot of erosion . . . so (the surf) doesn’t break anymore because of the way that the rocks are exposed. (Climate change) is definitely a thing,” Smith said.

Local researchers are asking the same question: How will rising ocean levels effect surfing? To find out, students and professors at Cal State Channel Islands in Camarillo have been observing rare high-tide events, which offer a glimpse at what coastline conditions might be like in the next 30 to 80 years.

Leading the effort to study the tide events—known as king tides—are senior environmental science and resource management majors Ashlee Phelps and Ryan O’Sullivan. The project, which kicked off during the Jan. 10 kingtide event, is part of the pair’s thesis project.

This wider range of tides, coupled with large winter swells, affects where the waves break, how they break and how frequently they break, said O’Sullivan, a surfer himself.

“In the future, when the sea level is that high normally, it might only be possible to surf here,” O’Sullivan said, pointing to a small area of the wave break at Ventura’s Surfer’s Point.

To collect data, the researchers ask volunteer surfers to rate the quality of waves on a scale of 1 to 5. Volunteers also report the time they went surfing so researchers can identify the tide levels. 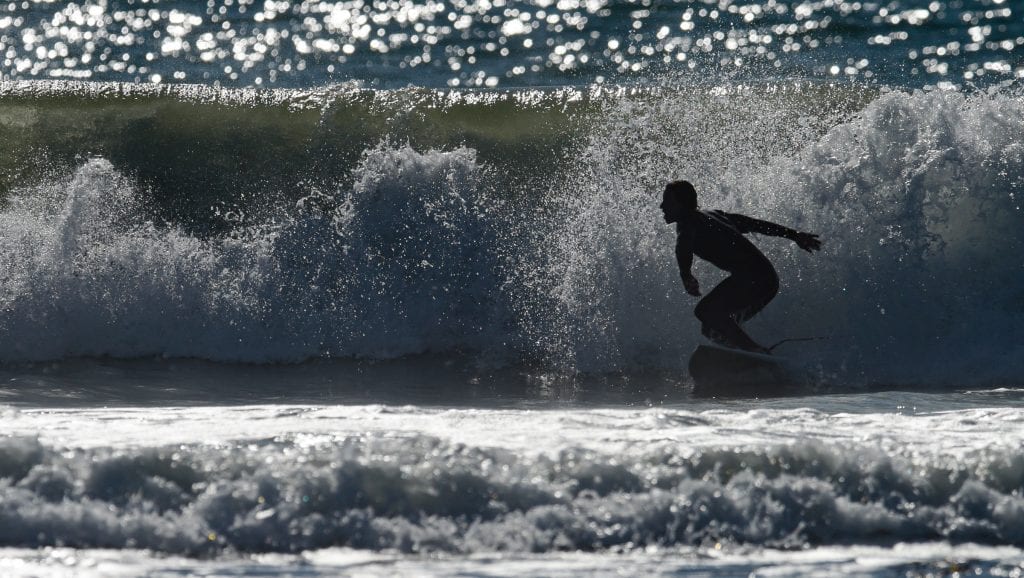 A surfer rides a wave at Surfer’s Point in Ventura on Jan. 10. MICHAEL COONS/Acorn Newspapers

What dictates the quality of a wave is up to the volunteer, O’Sullivan said.

“That’s going to vary between person to person, but we hope to just get a somewhat general consensus,” O’Sullivan said.

Dan Reineman, an assistant professor of environmental science and resource management at CSUCI, is the project’s mentor and a surfer of 30 years. Reineman said people who surf offer valuable insight because they’re “on the front lines of coastal change.”

“In order to surf, they must learn to make such careful observations of the ocean. Surfers will be the first to notice impacts to our coasts that eventually will affect the rest of us,” Reineman said.

Climate change will eventually affect those who don’t surf, Reineman said. If surfing gets worse, so will the local economy.

“Waves attract surfers locally, regionally and some of the waves in Ventura County attract them internationally,” Reineman said.

Other problems will become more evident as sea levels continue to rise, he said, starting with intermittent coastal flooding that will turn into persistent flooding of lower elevation areas. Groundwater will become more brackish, and important infrastructure—like the 101 Freeway and the Amtrak route—will be impacted, he said.

The findings of the king-tide project will provide valuable insight for future studies, Reineman said. The Ventura County chapter of the Surfrider Foundation, a San Clemente-based environmental nonprofit, partnered with the research team on this year’s local project and plans to expand the study to other U.S. coastal areas.

“We’re going to use what we learn from (the students) in terms of what works well and what doesn’t work well and next year, I’ll lead the effort to collect data on a much larger scale,” Reineman said.

The research team will be at Surfer’s Point Beach in Ventura on Sat. and Sun., Feb 8 and 9, for this weekend’s king-tide event. The king tide, expected to be the final of three this winter, will be the group’s last chance to collect data on the changing surf.

But many surfers don’t need the numbers to notice the change.

Robert Bowers, 58, an avid surfer since 1998, said he waits for the tide to go out during king tides because the waves break too close to the shore to catch. The longtime Ventura resident has seen the effect of rising sea levels already—part of the sidewalk along Surfer’s Point Beach collapsed last year from erosion—and wonders what the future of surfing will hold.

“It’s like, really? Are you going to be surfing down on Thompson Boulevard? I mean, it’s scary.” 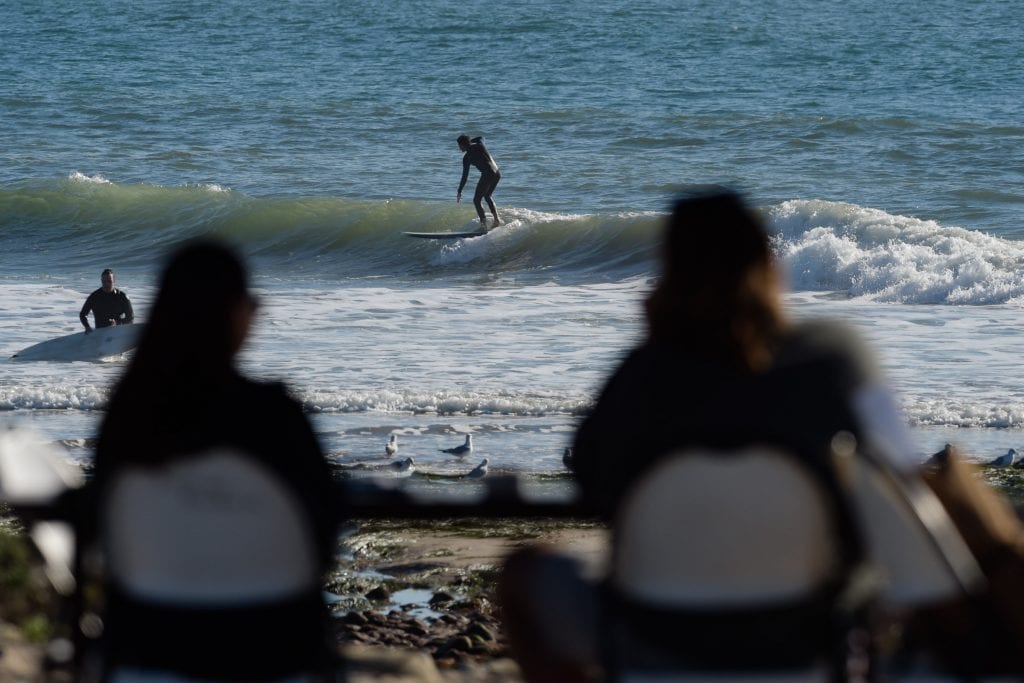