“Our focus will be on our current patients, and we can no longer admit new ones” 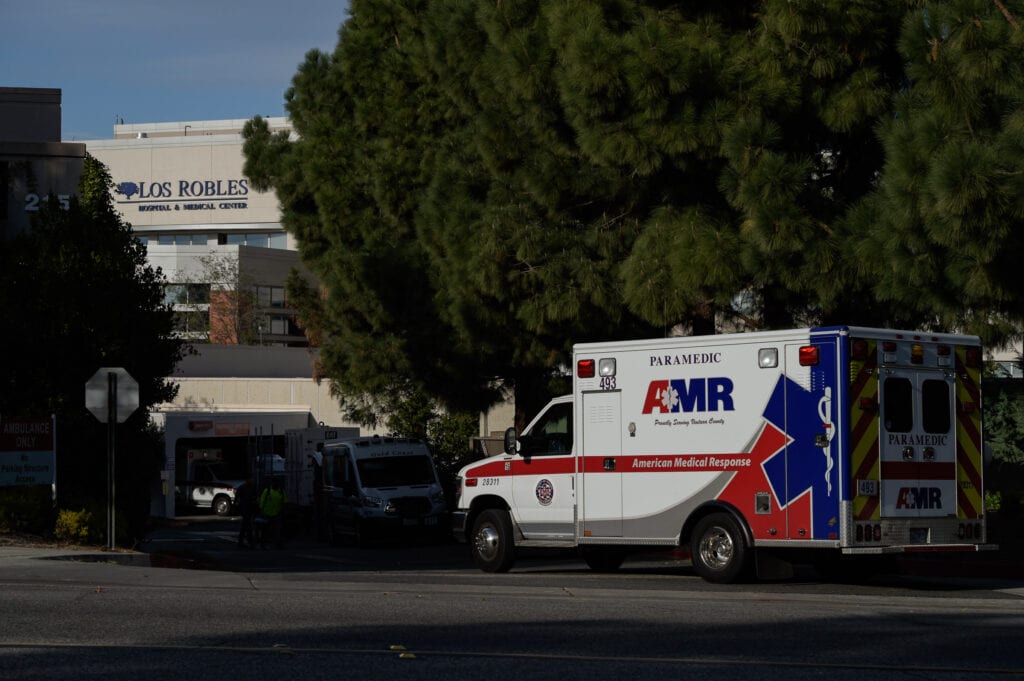 In an unprecedented move, Los Robles Health System’s emergency department is considering closing its doors to transfers, non-essential surgeries and ambulance traffic, with the exception of patients with symptoms of a stroke or heart attack.

Los Robles’ parent company HCA Healthcare announced the changes today, only to walk them back less than three hours later, saying only: “Our hospitals must limit their full scope of services in order to ensure nurses are available to care for patients with the highest needs.”

“We continue to accept transfers and ambulance traffic, but at this time we are holding off on non-emergent procedures as we get ready for this possible strike,” said Antonio Castelan, an HCA spokesperson.

The initial statement came hours after the union representing nurses at Los Robles and two other Southern California hospitals owned by HCA (West Hills and Riverside Community) formally served the company with a 10-day strike notice, threatening to walk off the job for 10 days starting Dec. 24 if the two sides can’t come to terms on a new contract.

Service Employees International Union Local 121RN said its primary issues are safety, staffing and workload. Representatives for both sides pledged to continue to negotiate during the 10-day window.

“Management’s proposals in negotiations have not shown a clear path to making the workplace safe for staff and patients,” the SEIU release states.

“The biggest issue for me right now is the lack of testing for staff,” said Kami Miller, a nurse at Los Robles, in a statement provided by SEIU. “We’re likely giving it to each other. We could be spreading it to our patients and the community.”

Daphne Yousem, Los Robles’ director of strategic marketing and communications, told the Acorn that LR staff is tested by the hospital if they are exposed to a COVID-positive individual at work. However, nurses have reported the hospital’s practice is not to test staff members unless they are symptomatic; instead, employees are informed when they have been exposed to a COVID-positive patient or colleague, and they are responsible for getting tested on their own time.

“Recently, two support staff tested positive, and a third who’d been working alongside them was also quarantined,” Miller said. “I told management that I was within 6 feet of one of the positive employees who wasn’t wearing a mask at the time, and yet the hospital didn’t test me.

“There was another recent exposure in Labor and Delivery, but none of the colleagues who’d worked with that employee were tested. My son’s teachers are tested every week. It just doesn’t make sense that we don’t have a vigorous testing program here.”

A statement provided by HCA, one of the nation’s largest healthcare providers, said the union’s decision to formally call for a strike is threatening the health and safety of the community.

“As a result of the union’s decision to strike, our hospitals must limit their full scope of services, and we have declared an internal disaster at each hospital effective today,” the Dec. 14 statement reads. “This means our focus will be on our current patients, and we can no longer admit new ones.”

According to the original release, sent at 12:30 p.m. today, Los Robles’ Level II trauma center and emergency room would only be open to stroke and heart attack patients. A new release sent two hours later omits any specific mention of these limitations.

HCA says it has bargained in good faith and will continue to do so in hopes of heading off a strike.

“During each renewal period our goal is the same: to secure a fair agreement that continues to support a culture of colleague safety, care excellence and compassion,” HCA said. “We thought we were close to an agreement this past weekend. However, when we made proposals that we believe fully addressed the issues raised by the union, they presented us new and unrealistic demands.”

Given the surge of new COVID cases in Ventura County—over 2,600 cases were recorded over the weekend, and over 200 patients with the respiratory illness caused by the coronavirus are now in local hospitals, according to figures at venturacountyrecovers.org—HCA said it was “unconscionable the union would urge nurses to abandon the bedside and ask them to sacrifice wages from several lost shifts.”

“It is also surprising that SEU 121 RN would take an action that may endanger patients, which their own constitution and bylaws state they should make every effort to avoid in a healthcare setting,” the statement says.

Meanwhile, the union says Nashville-based HCA, which owns over 180 hospitals nationwide, is putting shareholders ahead of staff and patients. Union representatives say the company experienced a 38% increase in year-over-year profits in the second quarter of 2020 and a 9% increase in the third.

“On top of that, the hospital chain was so profitable last year that they took $2 billion to buy back their own stock and pay shareholder dividends,” the union said.

“Our members’ hearts are breaking every day for their patients and their families,” said Rosanna Mendez, the union’s executive director. “They’re risking their lives every day working in unsafe conditions. The bargaining team asks for very basic stuff here, like access to the proper equipment, enough staff on their floors, access to COVID testing and safe quarantine policies. There’s no excuse for this pushback from HCA.”

Thousand Oaks Mayor Claudia Bill-de la Peña, whose husband is a physician, said she learned of HCA’s announcement via Twitter.

“This is a very unsettling time for our community,” Bill-de la Peña said an interview with the Acorn. “It is my fervent hope that the nurses and the nation’s largest hospital chain can work out their differences over the next 10 days.”

The longtime council member said this is the first time she can recall the hospital system announcing it would not take patients in its ER.

“I have lived here 25 years and I have not seen anything like this,” Bill-de la Peña said.

She said the nurses’ list of demands does not include raises, benefits or vacation time.

“This is the first strike that seems solely about the basic protections for frontline workers,” the mayor said.

The kids are alrightNew city manager ready to step inShots arrive, what’s next?