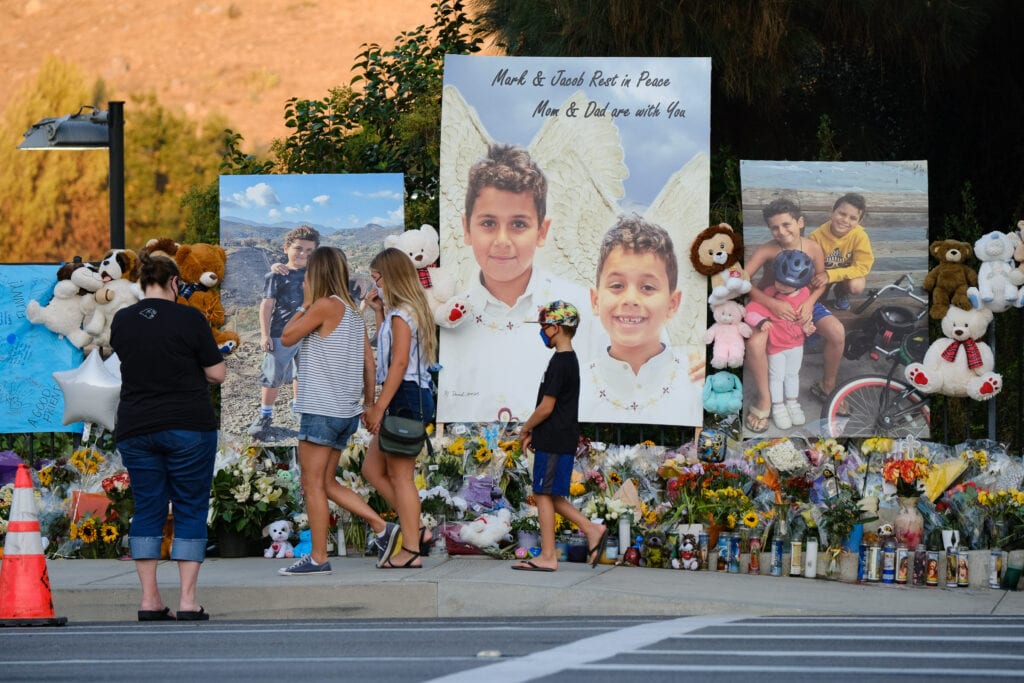 A memorial for Mark and Jacob Iskander at Triunfo Canyon Road and Saddle Mountain Drive in Westlake Village, where the brothers were killed while crossing the street on Sept. 29. The driver accused of hitting them has been charged with murder.    Acorn file photo

Nearly three months to the day after the collision that claimed the lives of Mark and Jacob Iskander, the woman alleged to be responsible has been charged with two felony counts each of murder and gross vehicular manslaughter. She also faces one felony count of hit-and-run driving.

Rebecca Grossman, 57, was due in court today to hear the charges against her and enter a plea. If she’s found guilty of second-degree murder, she faces a maximum sentence of 34 years to life in prison.

The Iskander brothers, 11 and 8, were on a walk with their family on Sept. 29 when the two boys were hit by a car while they were in a crosswalk at Triunfo Canyon Road and Saddle Mountain Drive in Westlake Village.

Mark Iskander was pronounced dead at the scene. His brother Jacob was taken to Los Robles Regional Medical Center and died several hours later. The rest of the six-member family escaped injury.

Investigators said the parents were able to save their other two children by pulling them back to the curb in time.

Grossman, a mother of two, was arrested at 10:30 p.m. the night of the collision on suspicion of gross vehicular manslaughter, felony driving under the influence and leaving the scene. She was later released on $2-million bail.

She was originally scheduled to appear in a San Fernando courtroom on Oct. 21 but that date was changed at the last minute to give detectives more time to investigate the case. Arraignment was scheduled for today.

In the days after the collision it was revealed that Grossman was racing a second driver at the time. Capt. Chuck Becerra of the Lost Hills Sheriff’s Station confirmed she was speeding to either stay ahead of, or catch up to a second vehicle. The name of the second driver, a male, has not been released, though they have been questioned. No charges have been filed against him to date.

In the months between the collision and the filing of charges, little information was made available to the public, leading to rampant speculation about where Grossman was allegedly drinking before she took off down Lindero Canyon Road and up Triunfo Canyon Road, just about the same time Mark and Jacob were about to cross the street with their parents and two younger siblings in tow.

Authorities say Grossman was driving faster than the posted 45-mph speed limit and was over the legal limit for alcohol. Photos taken the day after the crash show no signs of brake marks before or after the crosswalk where the brothers were hit.

A witness reported seeing Grossman’s white Mercedes-Benz parked near Triunfo Canyon Road and Golden Lead Drive, a mile up the road from the crash shortly after the collision.

The crosswalk where the collision took place is now slated to be improved with flashing lights, though it’s unclear when the City of Westlake Village will commence with the planned $250,000 improvement.

Grossman, a Hidden Hills resident, was chair of the Grossman Burn Foundation, a Calabasas-based nonprofit that offers burn prevention education and services to communities, according to the organization’s website. The foundation is associated with the Grossman Burn Centers, a network of facilities in California and Missouri founded in 1969 by the late Dr. Richard Grossman, her father-in-law.

To prove murder in a drunk-driving case, prosecutors must invoke People vs. Watson, a 1981 California Supreme Court decision that gave counsel the green light to charge second-degree murder in certain DUI accidents if they can prove “implied malice.”

Implied malice is when a defendant engages in activity that they know is likely to lead to a death, and does so without the thought of consequences. It typically requires a prior DUI conviction but not always. Grossman does not have a prior drunk driving conviction, but she is alleged to have been driving under the influence while simultaneously racing the second driver.

“Our city feels, from the facts that are known, that these charges are appropriate, and send a message to all about the grave consequences of intoxicated driving,” Westlake mayor Sue McSweeney said in a statement.