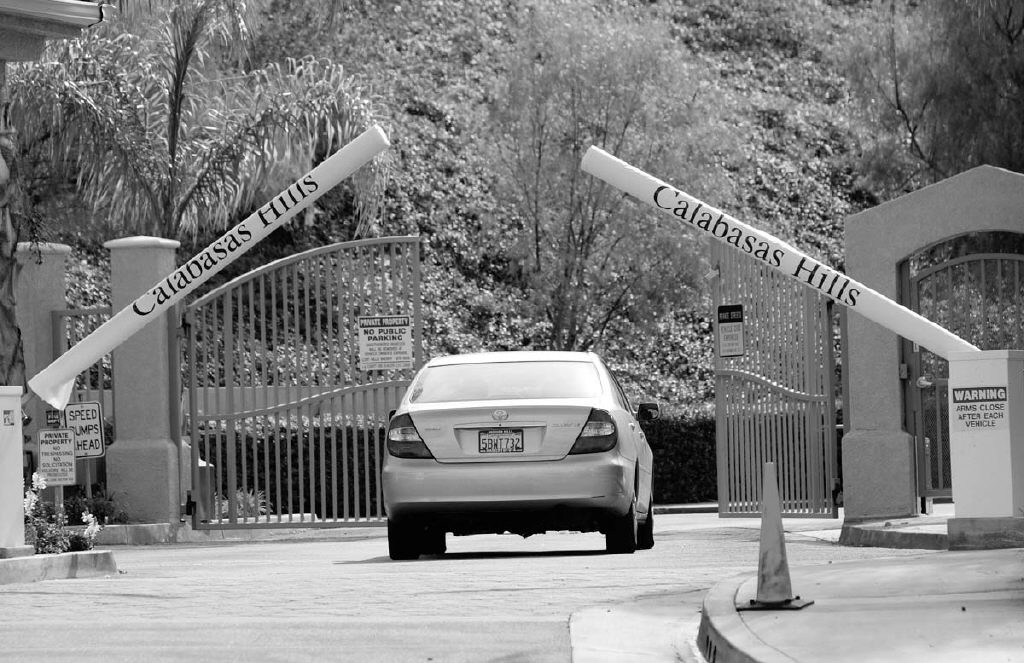 BARRIERS TO ENTRY-A vehicle enters one of the many gated communities in Calabasas.

Although gates and guardhouses are perceived as a benefit mainly for the rich, more than 30 percent of all new homes in suburban America are being built as gated communities, recent research shows.

More residents live in gated communities in the Western United States than in any other part of the country, according to the American Housing Survey.

Joan Young of Young Realtors, who helms three offices in the Conejo Valley, said gates increase home value by 15 to 20 percent or more, she said, depending on whether the property is a townhouse, family home or estate, and whether or not it has a manned guardhouse.

Gated neighborhoods take the burden off cities by making homeowners associations responsible for streets and recreational facilities, Young said, and give neighborhoods a "strong sense of community."

One hotbed for gated communities appears to be the city Moorpark.

In a 4-1 vote last month, the Moorpark City Council approved a change to the 554-home Pardee project known as the Moorpark Highlands to include electronic gates.

The Highlands joins gated developments such as Moorpark Country Club Estates, with a total of 216 homes planned; SunCal’s Moorpark Vistas, with 110; William Lyon Homes, with 250; and North Park Village, with 1,500 of its 1,650 units behind gates.

Hitch Ranch, with 415 to 600 homes, has yet to determine whether it will be gated, project manager Dennis Hardgrave said. However, the developer submitted plans that do include gates, according to Dave Bobardt, Moorpark planning manager.

To Gate or Not to Gate

Others question how beneficial gated communities really are.

"Soon, (citizens) will not be allowed to drive through their own town," Councilmember Roseann Mikos said. "This sends the wrong message. It sends a message to our children that you have to keep certain people out."

"I grew up in Illinois, where you could drive on every street, even those with the richest homes," Harper said.

According to Mike Kamino, city planning director, the city doesn’t have a single gated community and has no plans to build one,

"It’s not the trend in the Conejo Valley," said Laura Lee Anthony, general manager of Troop Real Estate, the largest independent realtor in Ventura County. "We don’t get that request (for gated property) very often."

Anthony noted that the Multiple Listing Service used by all agents does not include categories for security or manned gates.

"If gated was that important you’d think they’d have a search criteria," she said.

Opponents also object to gated developments because they contain public spaces that are cut off from use by the rest of the community.

But because gates are assumed to increase property taxes, they are particularly desirable to local governments. Public authorities need only provide the major infrastructure. Gated communities take care of all the spaces within.

Still, critics have denounced gated communities as "urban pathology" and as symbols of urban fear, urban secession and social exclusion.

"Because they are managed as private corporations and push for political autonomy and the implicit selection of residents, the outcome is increased segregation," said Renaud Le Goix, a Fulbright Scholar and an expert on gated communities.

Neighborhoods that boast 24-hour manned gates generally command higher prices, Anthony said. But other variables such as view, lot size, proximity to neighbors and privacy make it difficult to determine home values on the basis of gates alone, she said.

"It’s the climate, the schools, the people and the overall safety as reflected by low crime rates," Anthony said.

According to Young, "Today’s consumers are looking for lifestyles. "We have 43 miles of shoreline. We have the Santa Monica Mountains. In Thousand Oaks, we have 15,000 acres of permanent open space. Whether gated or un-gated becomes a choice."

The gated lifestyle creates a distinction from the outside environment and produces a sense of extended family and belonging to a group, said Emanuel Maidenberg, UCLA professor of psychiatry.

On a psychological level, gated communities are perceived as being safe,

"People think that it’s safe. It is a feeling, and it may not be true," Maidenberg said.