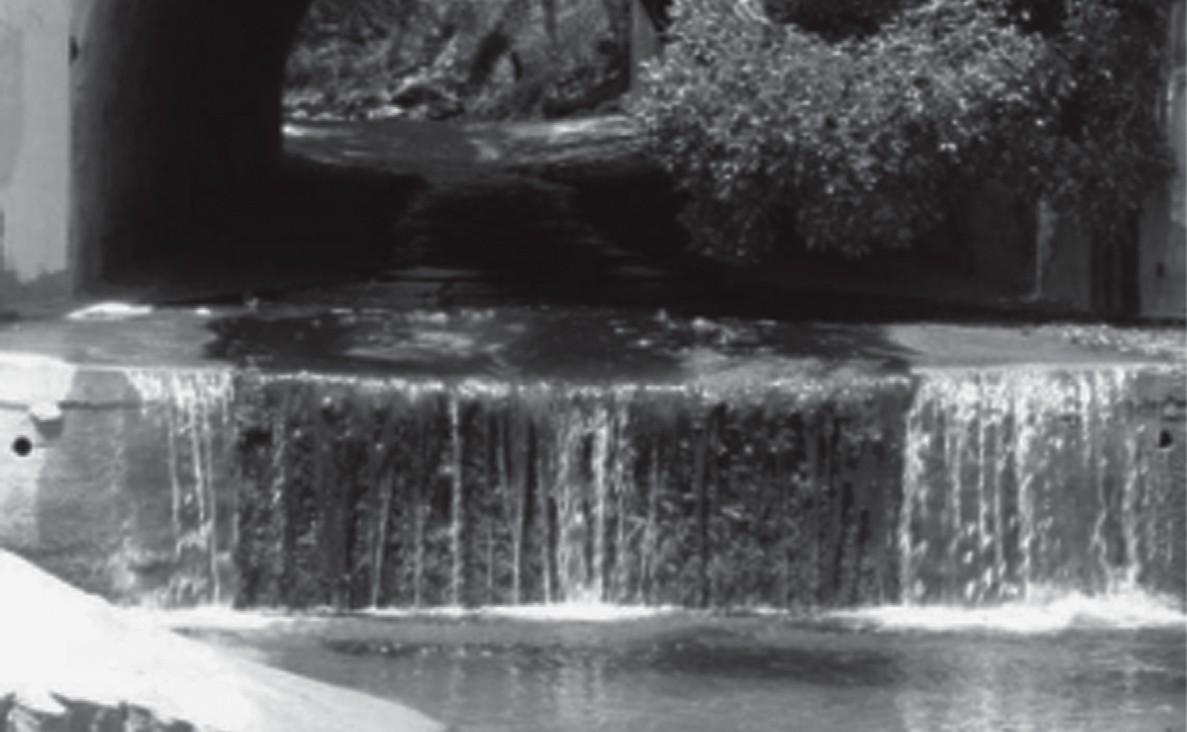 FLOW—An existing culvert carries a stream under the Pacific Coast Highway. Fish migrating upstream are unable to jump up to the 7-foot-tall ledge. One proposal would replace the concrete with rocks, making it easier for fish to swim through the culvert.

The endangered Southern California steelhead trout will receive a fighting chance at repopulating the region’s waterways if several environmental agencies can convince the city of Malibu that their plan to reestablish the fish’s migration routes is viable.

The Solstice Creek Culvert Crossing fish passage project has been the pet project of Caltrans, the Conservation District of the Santa Monica Mountains, National Marine Fisheries Service and other agencies and environmental groups for more than a decade.

According to Rosi Dagit, a senior biologist with the conservation district, a concrete channel under the Pacific Coast Highway near Kanan Road has hampered the migration of the trout from the ocean to streams where they spawn. The species is almost extinct.

The fish passage project calls for reconstruction of the existing stream channel and for the culvert under Highway 101 to be gutted and armored by large boulders to create a series of step-up pools that would allow steelhead easier passage from the ocean to the streams and back again.

Dagit said if the project is completed, the dwindling steelhead adults, now only 500, will have a chance to revive. The population should be closer to 5,000, experts say.

Mark Abramson, senior watershed adviser for the Santa Monica Bay Restoration Commission, would prefer that Pacific Coast Highway be transformed into a bridge with a water passageway for the fish underneath.

“A bridge would allow the natural sediment stream to come back,” Abramson said.

Abramson says a bridge would also increase flood protection and be more cost effective, since a new bridge would have a shelf life of 50 years.

He believes the large boulders required in the Solstice plan would not be the best way to stabilize the stream bank or lessen erosion.

Dagit bristles at Abramson’s suggestion that the proposed project will pave over the beach with cement and boulders. She said the bottom of the existing stream channel will be filled in with natural rock, gravel and sand.

“This will be an engineered channel, but both the armoring and the channel bottom will use no cement or grout,” Dagit said. “Much of the channel material will be covered with sand seasonally, (and) the proposed project does not dramatically change the beach configuration, access or use. It does, however, provide a naturalized channel bottom for steelhead migration.”

The Santa Monica Restoration Commission is the only agency that favors the bridge concept, although all parties agree that the steelhead population should be restored.

The life of a steelhead is similar to salmon, and Dagit said that in the 1950s, tens of thousands of steelhead returned each winter to spawn in streams from north of Santa Barbara all the way south to Baja, Mexico.

The species declined over the years when natural channels to the ocean were replaced with concrete conduits constructed under the Pacific Coast Highway.

The Solstice Creek Culvert Crossing is just one of 39 coastal restoration projects that began in 1998. Dagit said more than 60 miles of streams have been reopened for steelhead thus far.

Streambeds cannot always be restored to their natural states. Over time, flood control and diversion dams, water storage facilities, hydropower plants and other structures built for the common public good cannot be re- moved. In these cases, Dagit said that “fish ladders” have been constructed. Of the 39 projects in the state, 11 require the use of fish ladders.

A fish ladder is a device that can be attached to the side of a dam to provide “steps” during low water flow so fish can navigate to the ocean.

Mary Larson, senior fisheries biologist supervisor for the South Coast Region of the Department of Fish and Game, said there are numerous studies that show that fish passageways and ladders have been effective for increasing the population of steelhead.

“In our area, we have data that we can point to that show that the fish passage projects are working,” Larson said. “In the Robles Diversion Dam on the Ventura River, a camera records the upstream passage of steelhead as they make their way through the fish ladder. Since the ladder was completed, we have seen at least 14 adult . . . steelhead pass through. Given the extremely limited number of fish we have in all of Southern California, this is a lot.”