Fighting hunger with a big rig

A LESSON IN COMPASSION— The 53-foot-long “This Is Hunger” mobile exhibit visits the Agoura Hills/Calabasas Community Center on Dec. 7 and 8. The audio-visual exhibit is part of a nationwide tour sponsored by Mazon, a Jewish nonprofit group trying to end hunger among all faiths and backgrounds in both the U.S. and Israel.

In addition to their fitness classes and gym workouts, guests at the Agoura Hills/Calabasas Community Center were treated last week to a lesson in compassion.

About 300 people visited the “This Is Hunger” mobile exhibit that came to the center and gained valuable insight into what hunger looks like in America.

The exhibit’s Dec. 7 and 8 Calabasas visit was part of nationwide tour being sponsored by Mazon, a Jewish nonprofit group trying to end hunger among all faiths and backgrounds in the United States and Israel.

The audio-visual exhibit, located inside a 53-foot-long big rig trailer, illuminates the prevalence of hunger in America and tries to spur community members into action, said Maya Joshua, who guided the visitors through the interactive experience.

She and Craig Schneider, who drives the truck and provides tech support for the multimedia exhibit, will visit some 30 cities over the next 10 months.

More than 42 million Americans struggle with hunger, according to a recent report by the U.S. Department of Agriculture. But hunger in the U.S. is not like starvation in third-world countries, Schneider said.

Agoura Hills City Councilmember Illece Buckley Weber, who helped to bring the traveling exhibit to the area, said she’s always known about the issues of hunger and lack of nutrition, but she was astounded by the large number of people who are impacted.

The “This Is Hunger” tour lasts 45 minutes and features photos and narratives gathered by Barbara Grover, an award-winning photojournalist. It challenges people’s beliefs about who in America struggles with hunger and why.

After participants enter the trailer, they’re seated at a communal table where they “virtually” meet real people struggling with hunger. Portraits are projected at each end of the table and, one by one, these virtual representatives from diverse walks of life share their stories in their own voices.

“People are hungry in America because they’ve lost their jobs, they’ve depleted their retirement savings that they had and they lost their homes,” one of the men in the multimedia presentation says.

“Since I was 17 years old I’ve served my country being responsible, reliable, dependable and accountable,” the man continues. “(I) went to work every day . . . now I’m worried about feeding my family.”

“If you have to have your meds to keep you alive, you have to try to do your best with the food you can get,” an older woman says.

At the conclusion of the audio-video presentation, visitors are invited to engage in activities and experiences to deepen their awareness about the complexities of hunger. They also get pointers on how they can get involved in the anti-hunger campaign and help advocate for policy change.

According to Mazon officials, SNAP is the nation’s most effective defense against hunger. But the 2017 House Budget Committee proposes to cut the program by more than $150 billion over the next 10 years, which would limit benefits and end food assistance for millions of low-income families.

“A lot of people ask what they can do to make some sort of difference,” Joshua Schneider told a small tour group during the event. “While I admit we’re not going to solve hunger in this truck today, there are things people can do as they become more educated.” 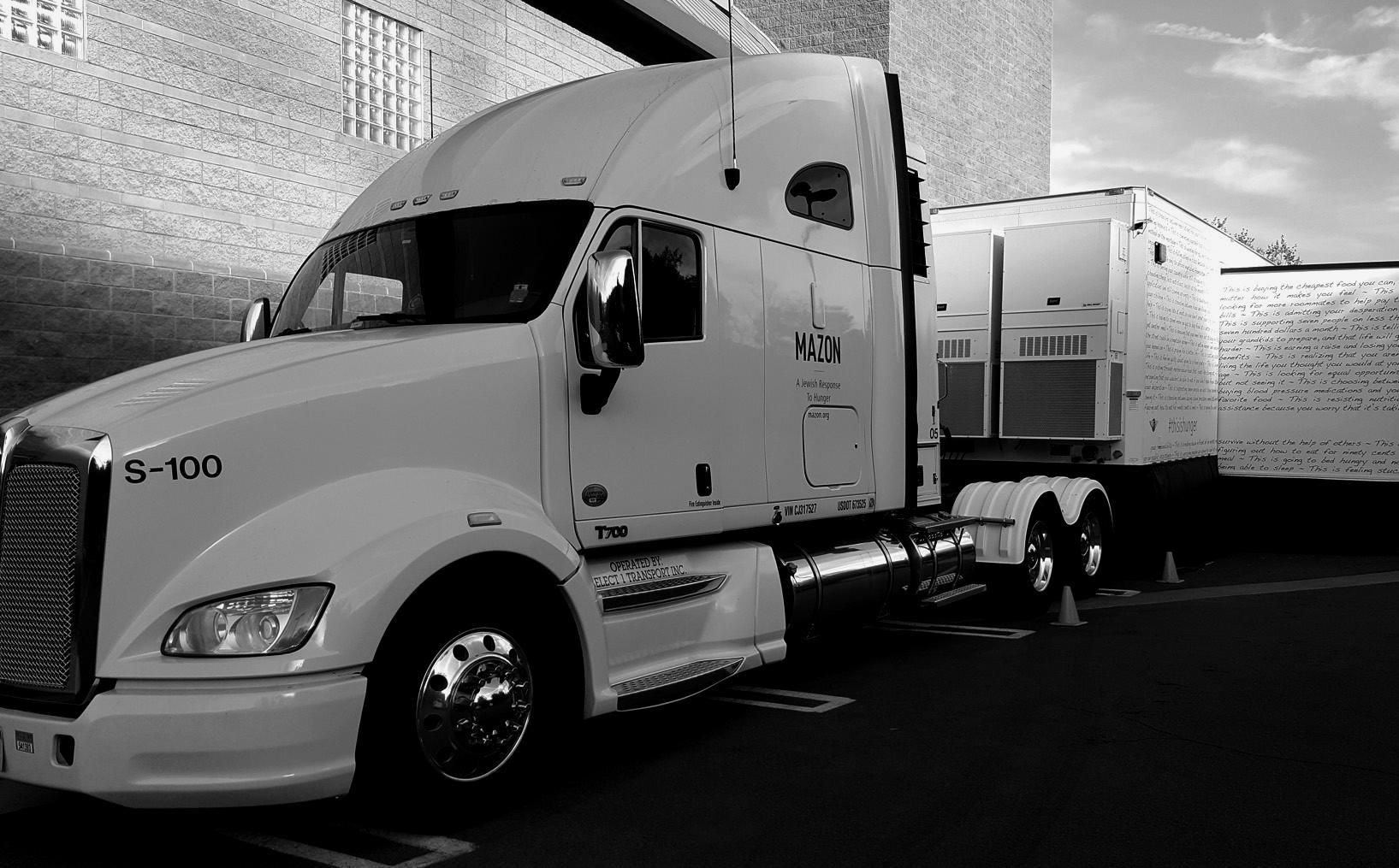