Disease has many faces 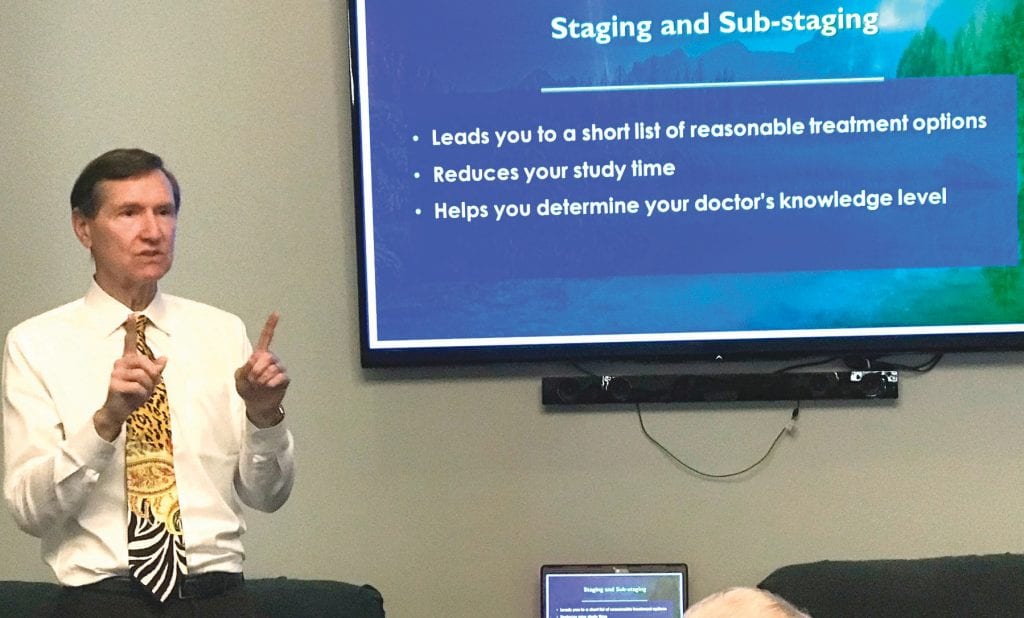 KNOWLEDGE IS POWER—Dr. Mark Scholz tells men and their spouses about the latest advances in prostate cancer treatment during a Jan. 18 presentation at the Cancer Support Community in Thousand Oaks. JOHN LOESING/Acorn Newspapers

The old joke used to be: “How do you prevent cancer?”

The answer: “Choose your parents carefully.”

Dr. Mark Scholz, one of the world’s leading oncology experts, discussed the role genetics plays in prostate cancer and other topics related to the disease during a Jan. 18 presentation hosted by the Cancer Support Community Valley/Ventura/Santa Barbara.

Scholz pointed to genetics and diet as contributors to prostate cancer. As for treatment, he informed the 50 men and women who attended the discussion about the latest trends in radiation and hormone therapy.

Prostate cancer survivors and their spouses meet monthly at CSC headquarters in Thousand Oaks. Scholz, a 30-year expert in the field, offered information and tips from “The Key to Prostate Cancer,” his latest book.

Prostate cancer is the second most-common cancer in men worldwide, and the eighth leading cause of cancer-related death.

Globally, there are more than 1 million new cases and 300,000 deaths every year, comprising nearly 4 percent of all cancer mortalities. It is estimated that one in every seven men will be diagnosed with the disease during his lifetime, but only about 30,000 deaths occur each year in the U.S.

Scholz believes the best treatment protocol depends on what stage the disease is in when it is found. There are five main categories ranging from low-risk to high-risk.

“There’s a lot to learn about prostate cancer and you only need to learn what’s pertinent to you.” Staging helps to find a “pathway” to therapy, he said.

PC, as it’s often called, is a $30-billion industry and growing due to the large baby boomer demographic, and doctors are eager to make their treatment option the favorite.

Surgery can bring irreversible consequences and is no longer considered a good first option, especially in younger males, the doctor said.

Radioactive seed implants in the prostate gland for low-grade disease and the suppression of cancer-causing hormones with drugs such as Lupron in more advanced cancers are today’s popular approaches. (A new generation of drugs can help offset the resistance that the body builds up against hormone therapy.)

When there is metastases, chemotherapy can be used.

Many men fall into the “active surveillance” camp: They simply keep a close eye on the disease while it’s still inside the gland and monitor its progress before committing to a certain treatment protocol.

PC remains one of the most treatable malignancies if it’s caught early, and in the U.S., more than 99 percent of prostate cancers are found prior to metastization, statistics show.

In early stages of the disease, the five-year survival rate nears 100 percent. Most men who are in old age will die with the disease, not from it.

“There are just as many harmless prostate cancers as there are skin cancers,” Scholz said.

But that doesn’t mean the disease should be taken lightly. The five-year survival rate for men in whom the disease has spread falls to 30 percent.

The key to victory is early diagnosis.

For men over 50, a regular exam that includes PSA monitoring is recommended. Prostate-specific antigen is a substance produced by the gland, and elevated levels may indicate cancer But in recent years the PSA test has been discredited and Scholz calls it “pitifully poor” in managing PC.

Imaging, such as the MRI test, is the new gold standard.

“It’s the beginning of a broad new era for cancer treatment,” Scholz said.

But having a good technician is paramount. “It takes a thousand practice readings just to take a good MRI,” Scholz said.

Scholz’s audience asked him about the role of diet and genetics in prostate cancer.

Red meat is probably a no-no, he said, but coffee appears to be OK, studies show. In general, eat a diet that is low in animal fat. That’s good advice whether sick or healthy.

As to whether or not one should find out if they’re predisposed to prostate cancer, “The whole idea of doing genetic testing is a hot new trend,” and DNA mapping can provide important information, Scholz said.

But, he cautioned, “a lot of the genetic abnormalities that are found you can do nothing about, and you will only scare yourself.”

Scholz said genetic testing can be a good “tiebreaker” in determining how aggressive the treatment for the disease should be.

“When people come, they share information and it becomes a wonderful place to learn about prostate cancer,” group facilitator Kevin Axelrad said.

The bottom line with prostate cancer: Treat it before it spreads. For more information visit cancersupportvvsb.org.