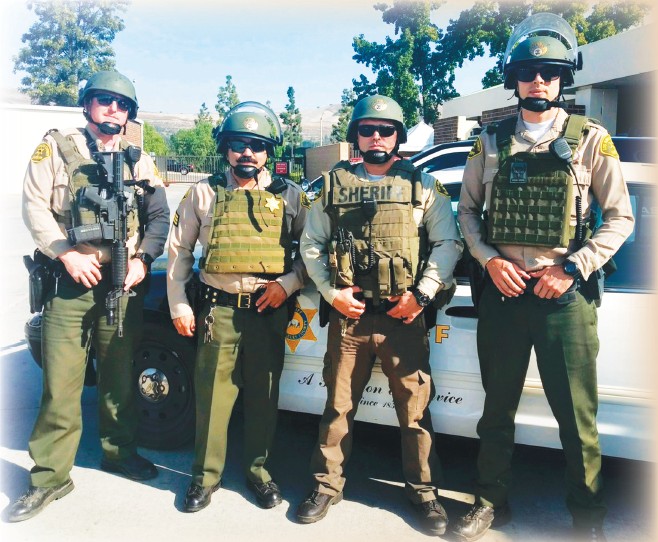 ARMED AND READY—Personnel from the Lost Hills Sheriff’s Station don tactical gear for the training. Courtesy of LASD

The Lost Hills Sheriff’s Station conducted an active shooter drill last week to see how well deputies would respond in case of a local attack.

Lost Hills Station Capt. Josh Thai said the purpose of the drill was to help him assess his station’s readiness—personnel, equipment and coordination with other agencies.

Thai said determining the proper response to a gunfire attack is the biggest challenge. Waiting too long to respond puts lives at risk, and some situations might require a stronger tactical response than is locally available.

“We do have SWAT, but they’d be coming from the East Los Angeles area. If it’s an active incident we’re not going to be able to wait (for them to arrive),” Thai said. “The patrol guys would have to step up and take that role . . . then we get the specialized people in, whether it’s the SWAT team or hostage negotiators.”

Sgt. Tui Wright organized the drill. He’s been a deputy for 30 years and is certified by Homeland Security as an active shooter training instructor.

“Our primary mission is to stop the bad guy,” Wright said. “Once that’s been done we have to treat the wounded until medical services arrive. We train officers in the application of tourniquets. Tourniquets save lives.”

Wright said the readiness drill involved simulated responses such as calling in air support for medical evacuations and coordinating with the fire department. Officials timed how quickly deputies reported to their teams and dressed in the proper tactical gear with correct armament.

The Lost Hills station has AR- 15 assault rifles on hand to respond in force. Thai said the issue is not only having the weapons but having deputies trained in using them.

“Having the right equipment is a big thing, whether guys have the right gear, helmets, shields, the type of weapons, who’s trained with what weapons,” Thai said. “With this drill we identify the flaws we might have to work on.”

There have been 242 U.S. school shootings since 2013, according to Everytown for Gun Safety, a nonprofit that advocates for gun control.

Thai said the sheriff’s department has coordinated with local schools to plan for such an event.

“The schools have a plan for the students: lock down, lock the doors. Our deputies are frequently visiting schools to talk about those kinds of things and make a plan,” Thai said. “When we get there, the plan is to identify where the threat is coming from. If it’s immediate, it might require some evacuation and it might not be safe to have a bunch of kids running around. They might be better to lock down somewhere and have someone guarding that door or space.”

The captain said it’s hard to offer advice that applies to all active shooter situations.

“When anything like that happens, find a safe place and stay there until police come, but if the threat is coming near, don’t hunker down in one place,” he said. “It’s so fluid it’s hard to identify the one thing you should do. It’s best to follow directions from us to help us.”