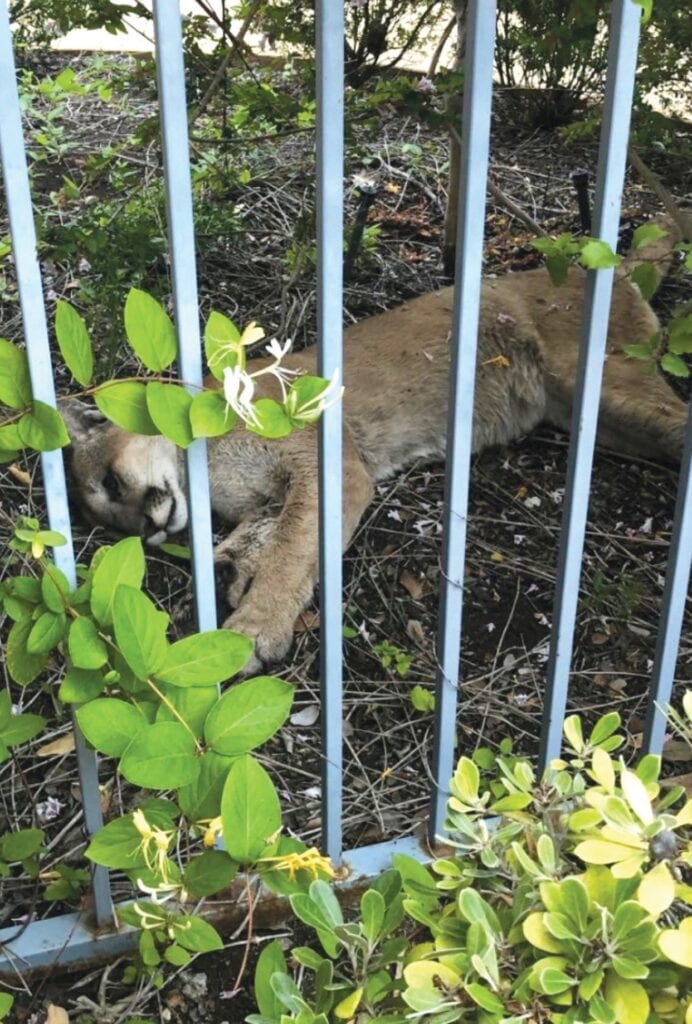 DOA—A Newbury Park resident found the body of a mountain lion next to a fence in his yard. The carcass is being examined for cause of death. Courtesy photo

Mountain lions dead from a variety of causes have been found in the woods, hills and freeways throughout the Santa Monica and Santa Susana mountains. Rarely is a deceased cougar found in a resident’s backyard.

Robert Wachbrit, a resident of Dos Vientos in Newbury Park, saw a mountain lion on the ground just past a fence in his yard on the morning of June 7. He watched to see if it was still breathing, and soon realized the big cat was dead.

Little is known about the animal, including its age and genealogy. The cougar was not wearing a tracking collar and was not part of the National Park Service study that follows mountain lions in the local hills.

Wachbrit told The Acorn it was his first mountain lion sighting ever, and said he was sad that it had to be deceased. Social media lit up when the picture of the cougar lying on the ground by the fence was posted a few days later.

“The woman who did the work was very informative,” he said. “The technician answered all my questions, let me hang out, showed me the ticks on the mountain lion’s body. We went looking for tracks, she let me help with everything except putting it in a body bag.”

Ana Beatriz Cholo, a spokesperson for the Santa Monica Mountains National Recreation Area, said the park service is examining the body to determine cause of death—including the presences of anticoagulant rodenticide in the animal’s blood.

There’s a push in the region to ban the use of rodent poisons due to their unintended effect on local wildlife. Biologists say the poisons travel up the food chain—rats that ingest it are eaten by predators that absorb the poison and over time become poisoned themselves.

The Environmental Protection Agency reports anticoagulants “pose greater risks to non-target species that might . . . feed on animals that have eaten the bait.”

“We never know the exact number of mountain lions (in the mountains). We have more than we’re studying, but male mountain lions require more space as a habitat, up to 200 square miles, so there could only be a certain amount,” Cholo said.

The mountain lion known as P-22 is one of the most publicized cases of how anticoagulants can travel up the food chain.

Made famous in a photo wearing a tracking collar and looking studly near the Hollywood sign, P-22 was captured in later pictures appearing thin. Biologists determined in 2014 that P-22 had mange, a parasitic disease of the hair and skin believed to be caused by rat poison. His blood tested positive for exposure to rodenticide, but he survived.

The cougar P-76 was the sixth collared mountain lion in the study to die of rodenticide poisoning and the third in the last two years.

Park service researchers have detected the presence of anticoagulant compounds in 26 of 27 mountain lions they tested, including a 3-month-old kitten.