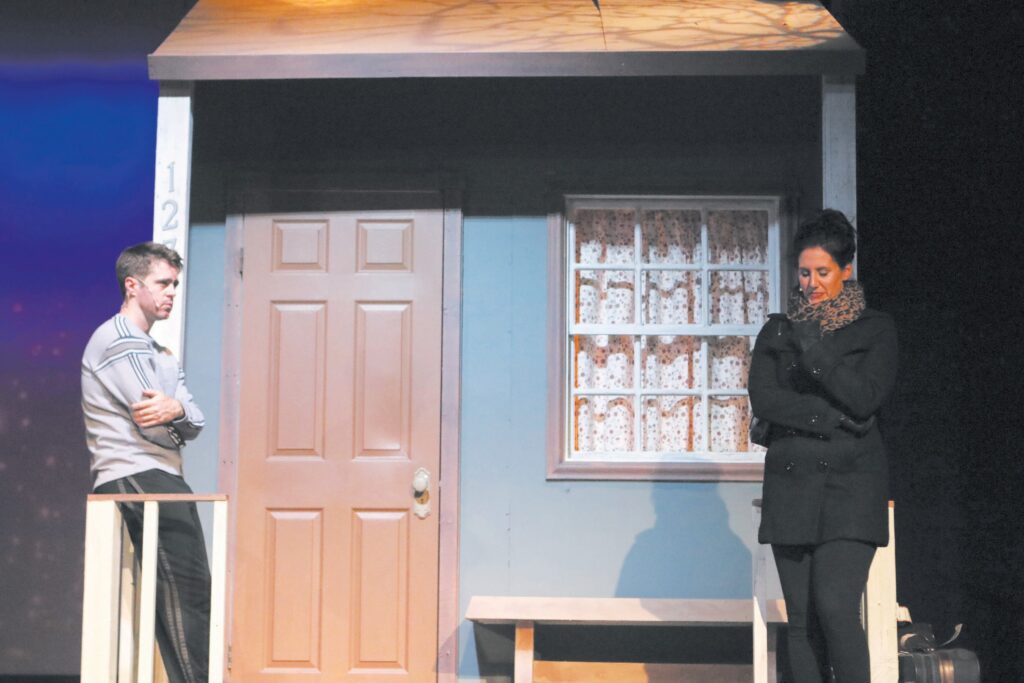 HEARTFELT— Eric Pierce and Heather Smith are two of the actors portraying multiple roles in “Almost, Maine,” playing on the indoor stage through Oct. 3 at the Conejo Players Theatre in Thousand Oaks. Courtesy of Mike McCauley

After 19 months of staging mainly musical revues in its parking lot, Conejo Players returned to live theater Sept. 17 with its production of “Almost, Maine,” staged inside the building where it has produced hundreds of plays and musicals for more than a half century.

Due to COVID precautions, audiences have been sparse (there were only about 20 in the theater on the first Saturday night), but those individuals were enchanted by the talent of the play’s six young actors, all of whom perform multiple roles in John Cariani’s series of romantic comedy sketches. Robert Chambers, Carl Garcia and Eric Pierce play the guys and James Coblentz, Rose Hunter and Heather Smith portray the gals.

Although the characters in the nine brief segments of the play all live in the quaint hamlet of Almost, Maine (so named because the residents never organized themselves sufficiently to become an actual town), they don’t interact with one another outside of their individual encounters. We do, however, get a sense of community as the characters in the sketches are mentioned in the witty dialogue about love and loss, often employing O. Henry endings, metaphorical themes and plot twists.

“Almost, Maine” has been ubiquitous in high school, college and community theaters since its debut in 2004. The atmospheric setting is a snowy, wintry landscape. Many of the episodes take place at night with the stars and the aurora borealis giving a shimmering, fantasy quality to the stories.

Cariani is a fan of Rod Serling’s legendary television series “The Twilight Zone,” and although there are no aliens in the play, there are some mystifying supernatural occurrences that take place in the allegorical stories.

The best example is in “Her Heart,” in which Glory (in one of several superb performances by Smith) camps out on the property of do-it-yourselfer East (Garcia) so she can say goodbye to her late husband under the aurora borealis. She carries with her a small bag containing her broken heart, which East promises to repair.

In “Sad and Glad,” Jimmy (Chambers) runs into his former girlfriend Sandrine (Smith) in the Moose Paddy bar, resulting in a bittersweet and awkward encounter. The “Twilight Zone” twist involves the bar’s waitress (Coblentz) and a misspelled tattoo.

Metaphorical feathers fly in “This Hurts,” which concerns Steve (Chambers), who is unable to feel pain, and the accident prone Marvalyn (Coblentz), who keeps clocking him with an ironing board.

In “Getting It Back,” Gayle (Hunter) tells boyfriend Lendall (Chambers) she’s returning all the love he has given to her and proceeds to haul it all out, stuffed in giant, bright red plastic trash bags.

“They Fell” features two male friends (Garcia and Pierce) who bond over beers while sharing tales of their latest girlfriend problems. When they find themselves attracted to one another, the term “falling in love” is depicted in literal and hilarious fashion.

You’re probably familiar with the term “waiting for the other shoe to drop.” This occurs literally in “Where It Went,” which uses a lost shoe to represent the love lost between an ice-skating couple, Phil (Pierce) and Marci (Hunter).

“Story of Hope” tells of a girl named Hope (Smith) who hires a taxi to drive 163 miles to the house of her boyfriend (Pierce) only to find someone she doesn’t recognize. The jarring twist is the identity of the stranger.

In “Seeing a Thing,” friends Rhonda (Coblentz) and Dave (Garcia) realize their relationship has progressed to another level, thanks to a mysterious painting Dave gives her. (The painting, created by Chambers, is being auctioned off during the show’s run.)

The compact but solidly functional set pieces were designed by Rick Steinberg. Beth Eslick directed with a sensitive hand.

The very model of Gilbert & Sullivan back liveRotary Club takin’ it to the streets SundayComing out of COVID with the stars of ‘Mamma Mia!’