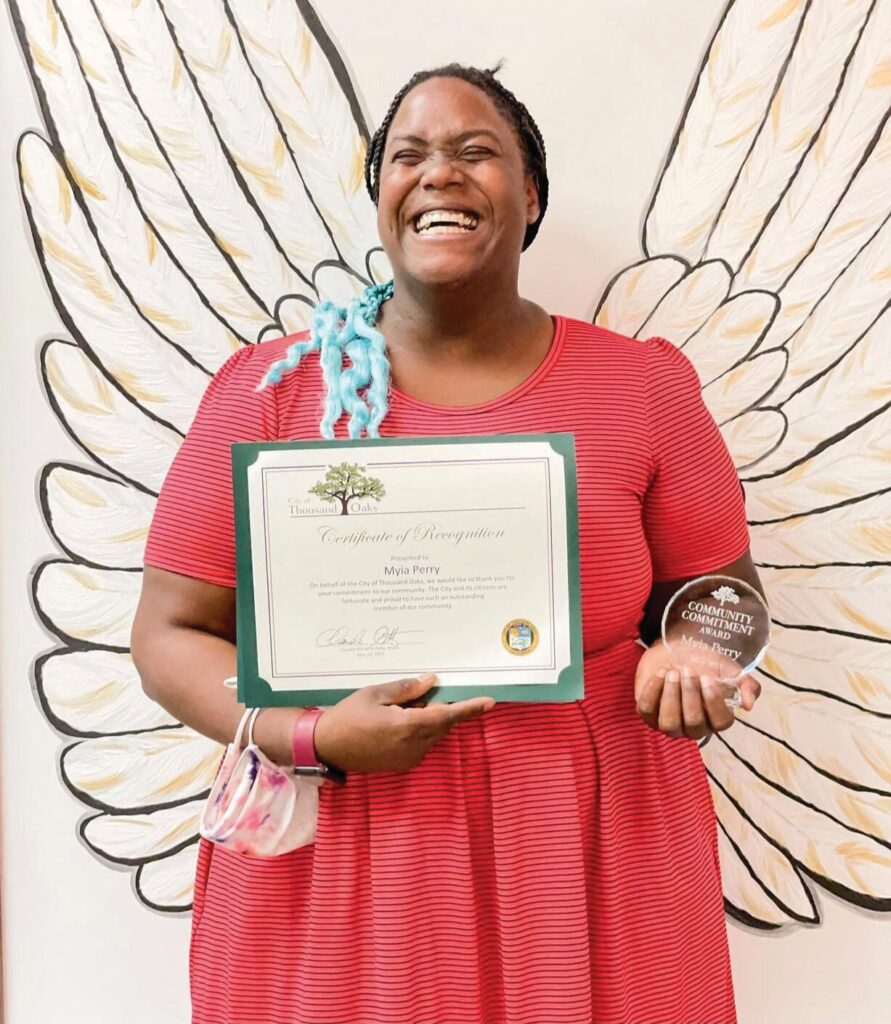 The 30-year-old Camarillo resident is an enthusiastic volunteer at James Storehouse, a faith-based nonprofit in Newbury Park that is dedicated to at-risk youths.

It provides resources to children in the foster care system, supports foster youths as they age out of the system, helps birth parents keep or reunite with their children, serves children who have been commercially sexually exploited and hosts life skills classes to promote emotional healing through restorative relationships in an effort to break the cycle of generational abuse and neglect for vulnerable children.

The work means a lot to Perry because she was once in foster care herself.

Perry was adopted by Jim and Dona Perry and grew up in the Santa Rosa Valley along with eight siblings, six of whom were also adopted. Her family has a diverse range of racial backgrounds, and her siblings include those of Chinese, Japanese, Mexican, Honduran and African American descent.

“ I went to live with my (then-foster) parents when I was almost 5. I was adopted when I was 9,” she said. “I did feel like I had enough love. Now I want other foster kids to feel like they’re loved.”

For her dedication to Ventura County’s vulnerable children, last month the City of Thousand Oaks awarded the Rio Mesa graduate with the Community Commitment Award.

“The city and its citizens are fortunate to have such an outstanding member of our community,” the certificate of recognition said.

Perry said she was blindsided by the honor.

Perry works as a nanny and became acquainted with James Storehouse three years ago when a friend of hers who is a foster parent had a child placed with her on an emergency basis. Perry came to James Storehouse to pick up children’s clothes and other supplies for her friend. That’s when Perry became enthralled with the organization and its mission.

“I just fell in love with it,” she said. “I grew up in foster care and we didn’t have anything like this growing up.”

James Storehouse is inspired by the Bible verse James 1:27: “Religion that God our Father accepts as pure and faultless is this: to look after orphans and widows in their distress and to keep oneself from being polluted by the world.”

Perry is now a regular fixture at the nonprofit on Old Conejo Road. While she has a range of duties, she said her expertise lies in installing car seats and figuring out strollers. She said her favorite part of volunteering is seeing the smiles on families’ faces when they receive much-needed resources like diapers, clothes, toiletries and cribs.

The nonprofit also provides cars and living arrangements for young adults aging out of foster care who are left to fend for themselves on their 18th birthday. About 20% of foster youths instantly become homeless when they turn 18, according to the organization.

“We go from preemies to college, and we help low-income families as well,” Perry said.

“It’s always fun to see and hear families’ back stories, especially when some of them weren’t doing well at all and have done a 180 and are now working and doing great and living life and trying to provide for their kids,” she said.

Demand for James Storehouse skyrocketed during the pandemic, Perry said, due to children being home from school, parents being out of work and so many family crises coming to a breaking point. The organization helps an average of 732 foster babies, children and youths every month. In 2020, James Storehouse provided emergency resources for 8,778 foster children and their families in Ventura and Los Angeles counties.

James Storehouse’s executive director Stacy DeWitt said Perry keeps all of the baby and toddler gear in the warehouse organized and knows exactly which resources children need for a smooth transition into their new foster home.

“She makes each child and youth that comes to James Storehouse feel welcomed and loved,” DeWitt told the Acorn.

Perry’s aspirations go beyond just serving foster children. She hopes to become a mother herself someday.

“I just want one I don’t have to give back,” she said.

More From Faith Go To The Faith Section