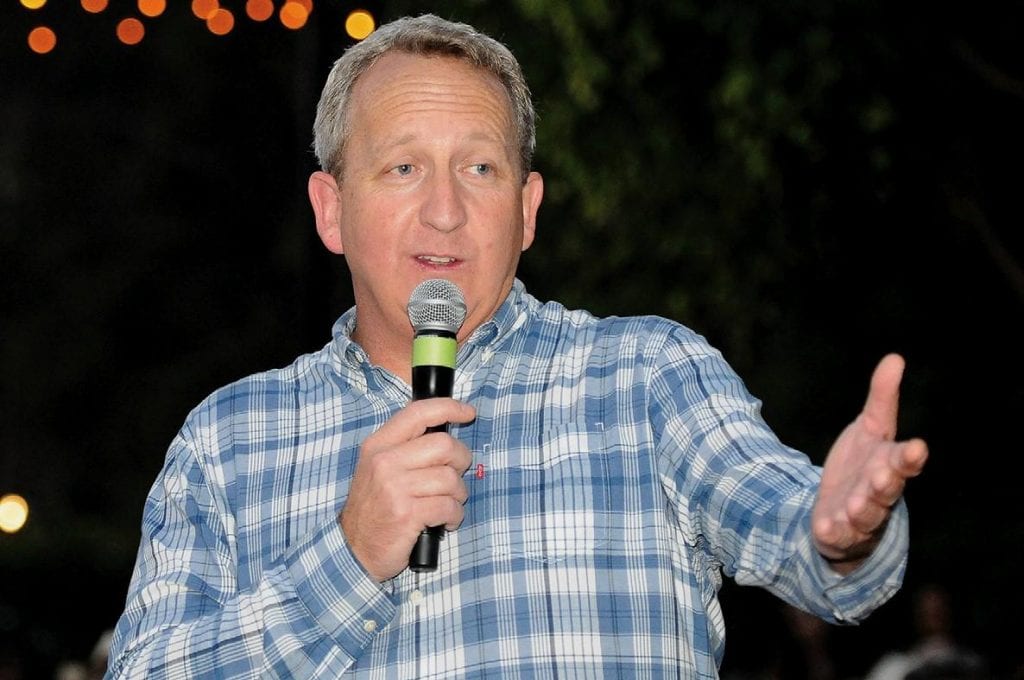 TAKING A STAND—Pastor/Councilmember Rob McCoy has invited members of his church to receive communion on Sun., April 5, saying the holy rite is “essential.” Acorn file photo

Millions of Christians around the world will spend today, Palm Sunday, watching church service and taking communion from the comfort of their homes as they seek to abide stay-home orders intended to limit the spread of the coronavirus.

McCoy’s Godspeak Calvary Chapel in Newbury Park has invited its parishioners to partake in the sacrament of communion—not services, just communion—to kick off Holy Week despite county and state orders restricting non-essential travel.

“Godspeak, as a family, is going to take communion together,” says a message on the church’s website.

To make that possible, members said, the church building on Via Las Brisas in Dos Vientos will be open from 1 to 4 p.m. after the 11 a.m. service is live-streamed so worshipers can filter through the church one by one, 6 feet apart, taking the elements (wafers and grape juice) from a communion table and then either exiting out the side of the sanctuary or sitting briefly in one of the 10 chairs (each one 6 feet apart) that will be set up in the 400-seat church. Members who are sick or at-risk have been asked to stay home.

McCoy said strict Centers for Disease Control and Prevention guidelines will be followed and it will be no different than people waiting in line at the grocery store.

Godspeak, like other houses of worship around the state, has ceased in-person services and gone to live-streaming since the third week in March, when Gov. Gavin Newsom announced a statewide stay-home order that did not include an exemption for worship services.

On the Godspeak website, it says markers have been set up so those who come will remain 6 feet apart before, during and after taking communion. Parishioners are asked to refrain from any physical greetings and from touching anything besides the communion elements. Communion will also be offered in the parking lot on a drive-through basis, according to the website.

In a Youtube video posted to the Godspeak website Saturday, McCoy said to consider communion nonessential while businesses like marijuana dispensaries continue to operate is “unacceptable.” He said the ability to freely practice religion is guaranteed in the First Amendment to the Constitution.

“We are essential. Essential for the simple fact that God called us to this,” McCoy said. “We want to render to Caesar what is Caesar’s. We want to respect social distancing. We want to respect everything that is requested of us. But we still want to have access to what is a sacrament in the Protestant church and the Catholic church as well.”

The church’s decision has not sat well with some local residents, including fellow Christians.

“He doesn’t get to decide what is essential and what isn’t!” tweeted Thousand Oaks resident Julie Waters. “Our county and state officials are the ones making the decisions, not him!”

Carol Roberg is a Godspeak member who lives in Camarillo. The 77-year-old said she is excited to receive communion because she and other seniors like her, many of whom have lost their spouses, have been particularly isolated since stay-home orders were put in place just over two weeks ago.

“In Scripture it says there’s healing in communion and I think we all need that, body, soul and spirit, at this time because a lot of people are experiencing depression,” she said.

Godspeak parishioner Ed Maloney, 68, said communion typically takes around 10 minutes, but because the church will be limiting how many people can enter the building at a time, the sacrament will now stretch over three hours.

The Westlake Village resident said Palm Sunday starts the holiest period in the Christian calendar and to continue the ancient tradition of communion will be “reassuring.”

“It’s like everything has been disrupted but this is something that dates back thousands of years. I think doing it is going to be an anchor, a bit of normalcy in this insanity we live in right now,” Maloney said. “It’s not about controversy, it’s about communion.”

While Godspeak is planning to hold Palm Sunday communion, other local churches have decided to forgo in-person gatherings and will not offer the breaking of the bread.

According to its website, St. Paschal Baylon Catholic Church in Thousand Oaks has cancelled all public masses and sacraments for the time being, as has St. Jude the Apostle Church in Westlake Village.

Calvary Community Church in Westlake Village, the largest evangelical congregation in the Conejo Valley, will offer its Palm Sunday and Easter services via live stream, as will Bethany Bible Church in Thousand Oaks and Monte Vista Presbyterian Church in Newbury Park.

“Your house is now your sanctuary,” the Rev. Tom Stephen of Monte Vista told his congregation via email.

In the Youtube video, McCoy said if his church were in Wuhan, China or in hard-hit New York City, he would “be wrestling over this in a different capacity.” As of Saturday, there were 203 confirmed cases of COVID-19 in Ventura County, 45 requiring hospitalization and six resulting in death, according to figures provided by Ventura County Public Health.

McCoy encouraged other pastors to pray about what they should do for their congregations and “don’t be afraid.”

Lynne Henderson, a nurse at Los Robles Regional Medical Center in Thousand Oaks, said it’s the public who should be afraid of the consequences of the church’s actions: “Just play by the rules and stay home. Right?” she tweeted.