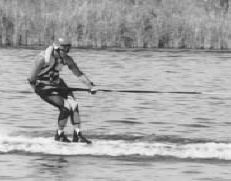 GRIPPING–Marshall Cole hangs on for dear life as he reaches speeds up to 100 mph, sometimes faster, on his water skis.

Water skiing at breakneck speed isn’t everybody’s idea of fun, but champion racer Marshall Cole of Calabasas embraces the sport and runs with it.

Reaching speeds of 80 to 90 mph on the mostly calm waters of Lake Mead and Parker Dam, Cole won three of four races at the biennial competition. Boys from all over the world went head-to-head in half-hour speed runs that were a test of strength, skill and fearlessness.

Cole’s brother Graham, 19, represented the gold-medal winning U.S. Elite team in the open division. The boys’ father, Jon Cole, has competed over the years as well.

"Belonging to one of water ski racing’s most accomplished families certainly has not hurt Marshall’s development into a world-class competitor," said Steve McDermeit, the USA Ski executive director.

Speed water skiing is hardly for the weak. A driver pulls Marshall in a 21-foot custom speedboat with 1,500 horsepower twin-turbo engine capable of reaching more than 100 mph. Tethered to a special pull rope 238 feet long, Marshall keeps his balance on a single 88-inch slalom ski as the shoreline goes ripping by.

A third member of the team, the observer, watches Marshall’s every move.

"His observer knows him, how fast he can go and Marshall signals if he wants to wave it up or down," said the father. "It’s very a much a team sport with the skier being the one performing."

When he was 11, Marshall’s career almost ended before it began.

"He was racing his brother and they were doing about 75-80 miles per hour and he crashed hard and it shook him up," Jon said. "I never thought he’d come back."

Marshall wasn’t injured in the Northern California crackup, but his self-confidence took a beating.

"I got back in the water fairly quickly, but I wasn’t anywhere near where I was before it happened," Marshall said. "I wasn’t as confident as I was. I always had a fear since then, but it finally went away."

Marshall grew up skiing with his father and brother on Lake Arrowhead in the San Bernardino Mountains of Southern California. He wasn’t even in first grade when he began experiencing the thrill of going fast.

"It’s definitely a thrill," Marshall says. "It’s not so much scary because I’ve been doing it a long time, but it’s still a rush."

Three years after his accident, Marshall told his father he wanted to make a commitment to becoming the junior champion. The training and hard work paid off with last month’s world title, but Marshall still had his troubles. He crashed in the final race at Lake Mead on Oct. 21, but already had the championship wrapped up on points. Marshall had topped 100 mph the week before at Parker.

While competition takes a hiatus until spring, Marshall keeps in top shape with a weekly dry land regimen that includes lifting weights, pulling a sled and climbing stadium stairs. Weekends he’s back at the lake working on water. The family boat is often there, the same one that pulled Graham at the recent championships. Jon was the driver.

When he was 8, Graham set the record for youngest finisher at the Catalina Ski Race and has competed in the event every year since. Following in his brother’s footsteps, Marshall won Catalina last summer.

Graham is a sophomore majoring in bioengineering at the University of California San Diego. Marshall, who plans to attend college next year, competes on the high school water polo team when he’s not in class.

The Coles aren’t the only world class water skiers who live locally. Joining Graham on the current U.S. Elite team is Erin Saunders of Agoura Hills. Like the Cole brothers, Saunders was competing on skis by the time he was 6. Two years ago as a 15-year-old, Saunders placed second in the world juniors.