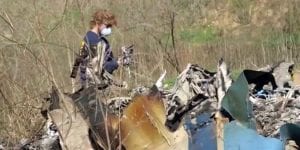 A crash site investigator arrives at the scene. Courtesy of NTSB

Investigators are continuing their search for clues into what caused the Jan. 26 helicopter crash in Calabasas that killed nine people, including NBA legend Kobe Bryant, 41, and his 13-year-old daughter, Gianna.

A Sikorsky S-76B private helicopter owned by Fillmore-based Island Express Holdings Inc. crashed about one mile east of the Las Virgenes Municipal Water District headquarters on Las Virgenes Road during a heavily overcast morning in which even Los Angeles County Sheriff’s helicopters were said to be grounded due to the extreme fog.

The Los Angeles County Coroner’s office removed three bodies from the wreckage on Sunday. The National Transportation Safety Board arrived at the crash site early in the week to recover evidence and begin their investigation. The six remaining bodies were recovered Monday.

Why the crash occurred remains a mystery, but the foul weather is believed to be a factor.

“The pilot requested flight-following but was told they were too low (for that),” Jennifer Homendy of the National Transportation Safety Board said. “Approximately four minutes later the pilot advised they were climbing to avoid the cloud layer. When air traffic control asked what the pilot planned there was no reply. Radar data indicates the helicopter climbed to 2,300 feet and then began a descending left turn. Last radar contact was around 9:45 a.m. and is consistent with the accident location,” Homendy said.

The first 911 calls came in at 9:47 a.m. from someone who spotted the helicopter, which was reported to have been flying low among the morning’s heavy fog.

“Apparently some folks were out mountain biking here (Sunday) morning and saw an aircraft in distress that went down into the hillside,” L.A. County Fire Department spokesperson Capt. Tony Imbrenda said. The first reports came in just before 10 a.m., he said. 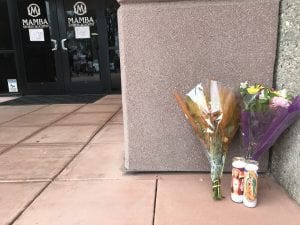 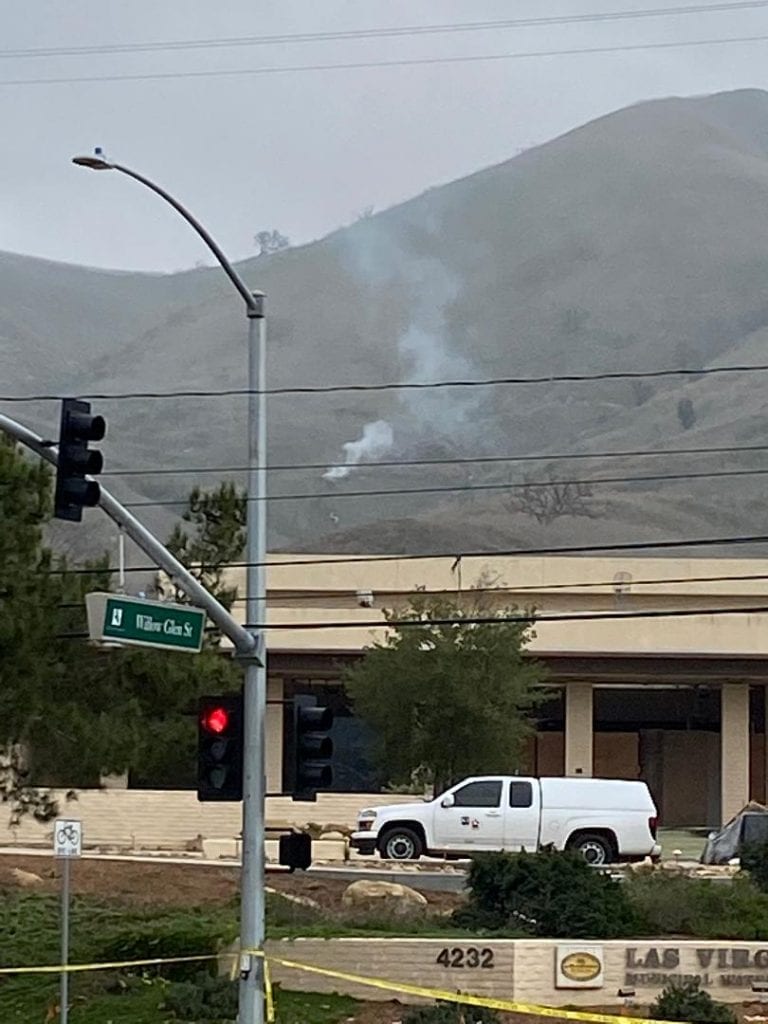 The captain wouldn’t say if the morning’s heavy fog played a role in the incident. No official cause of the crash has been given. The helicopter had reportedly been en route from Orange County to the Camarillo Airport.

“Unfortunately there were no survivors,” Imbrenda said.

At a 2:30 p.m. news conference in Calabasas, Los Angeles County Sheriff Alex Villanueva listed the total fatalities at nine; earlier reports had the number at five.

Gianna, Alyssa and Payton played for the same eighth-grade girls’ travel basketball team based out of Mamba Sports Academy in Newbury Park, where the group was headed.

Multiple fire and sheriff department units set up a command post at the water district headquarters on Las Virgenes Road and Willow Glen Street near the incident. Representatives from the National Transportation and Safety Board were called to the quarter-acre crash site for further investigation.

Lakers’ faithful started arriving at Mamba Sports Academy on Rancho Conejo Boulevard shortly after 12:30 p.m. to pay their respects to the fallen superstar, just as stunned players and parents began to filter out. Only moments earlier, travel teams from across the state participating in a basketball tournament, the Mamba Cup, hosted by the sports complex, had received word of the crash.

Among those on hand at Sports Academy when the news broke: Vanessa Bryant, Kobe Bryant’s wife of 19 years. Kobe Bryant and Gianna were expected to arrive sometime before noon for Gianna’s game; Bryant was scheduled to coach the team.

Video posted online shows a large group, arms locked, heads bowed, standing on one of the facility’s five basketball courts in prayer. A photo shows hundreds inside the giant complex taking a knee shortly after the announcement of the tragedy.

Outside the facility, two pieces of paper taped to the front doors announced in large black letters that the complex was closed; all games were cancelled.

Onlookers picked a corner near the entrance to start a makeshift tribute.

What began as two lit candles and two bouquets of flowers quickly turned into a plethora of Bryant memorabilia, banners, jerseys, bumper stickers and a Sports Illustrated with No. 8 on the cover. Fans shared stories of the Lakers’ great, several referencing his 81-point game against the Toronto Raptors in 2006.

Teams taking part in the two-day Mamba Cup, a series of 11 tournaments leading up to a championship game in March, littered the parking lot, some standing in stunned disbelief, others sharing hugs and wiping away tears.

Bryant’s connection with the sports complex, which opened in 2016, began in December 2018, when he became an investor. As part of the deal, the facility, previously known as Sports Academy, was dubbed Mamba Sports Academy, a reference to Bryant’s nickname as a player: the Black Mamba.

Assemblymember Jacqui Irwin said in a statement: “Kobe Bryant was more than a great athlete. To many, he was an icon, someone to be looked up to for his contributions to his local community and throughout Southern California. My heartfelt condolences to the families and loved ones of the victims, Kobe’s family and loved ones, his colleagues and staff (at Mamba Sports Academy) and everyone who admired him.”

Mourning fans gathered outside Church in the Canyon, on Las Virgenes Road, across the street form the crash site. From the parking lot, onlookers could see the pillar of smoke from the wreckage, which was somewhat visible through the morning fog.

Pastor Bob Bjerkaas said the crash occurred during the church’s Sunday School service. He said when emergency responders arrived on the scene he offered them the church as a base of operations.

He learned about Bryant’s death a short while after the crash, while he was giving a sermon.

“I’ve been preaching from the book of Job, which is about a man who lost everything, knowing god had some bigger plan. I was preaching from chapter 12 and 13, about how we never know when our day will come. I said, ‘just like, tragically, three people had their lives end today,’” Bjerkaas said. “Then people who’d been following on the news interrupted my sermon to say it was five people and one of them was Kobe Bryant. It was a very sad moment. There’s a lot of lakers fans in this congregation.”

Camarillo resident Jayson Vialpondo was one of many who came to the scene so they could process the news.

Vialpondo said he’s followed Bryant’s entire career, and came to Calabasas to see for himself.

“I didn’t want to believe it. To actually see the smoking helicopter… I heard someone say his daughter was with him too and that killed me. it’s sad, he was on his way to a basketball camp. it’s crazy, and crazy that it happened like that,” Vialpondo said.

A father of two daughters, Vialpondo said the news that Bryant’s 13-year-old daughter was on the helicopter was the most devastating part of the news.

John Loesing and Kyle Jorrey contributed to this story. Information will be updated as more details become available. 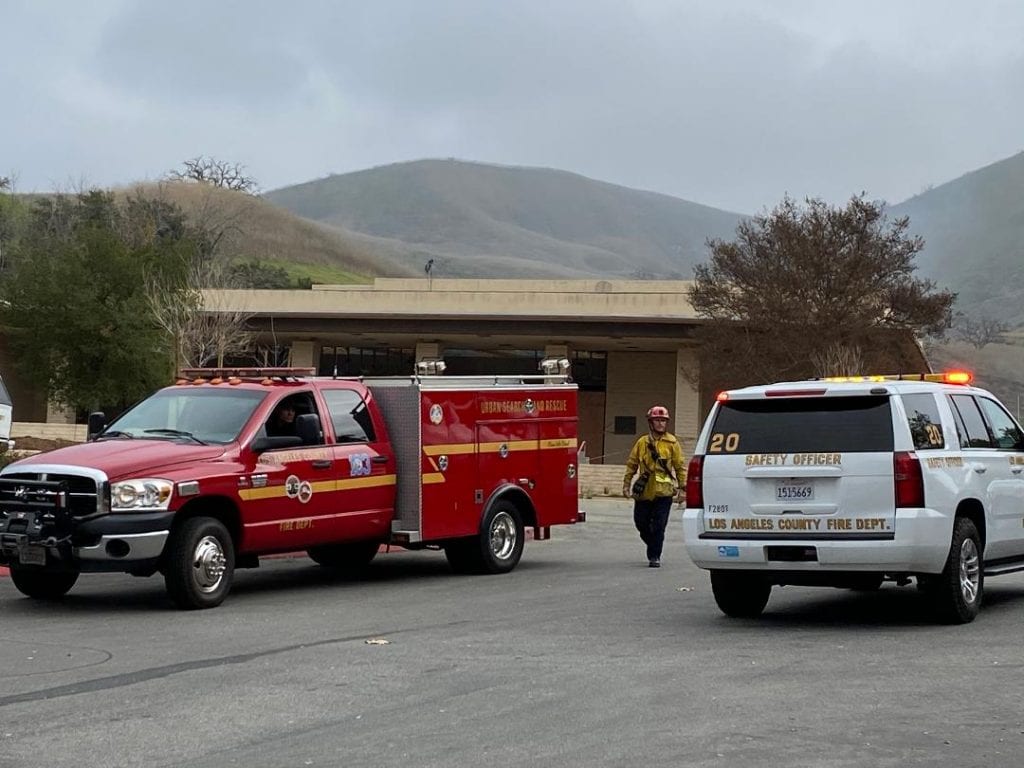