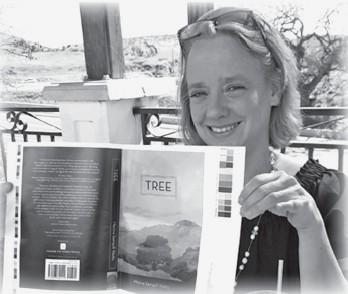 When I met with Calabasas resident Melina Watts, a former watershed coordinator for the Resource Conservation District of the Santa Monica Mountains, I had a preconceived idea that her first book was meant for children, and would center on environmentalism.

I expected whimsy, maybe a bit of sentimentality in the book she aptly named “Tree” because, after all, Watts is a bona fide tree-hugger, water worrier, and all-around nature lover.

Two of her three children have middle names taken from Northern California rivers: Vincent Tuolumne, 21, and Stephen Stanislaus, 6. The middle name of Watts’ daughter, Lucilla Mir, 8, is from the Russian word for peace.

But instead of a romp of a story, Watts’ first novel is written for adults, partly due to the fact that death and dying play a prominent role in the book’s arc of history.

“There’s a lot of death in 229 years of history,” Watts said during a recent interview with me at Ladyface Ale Companie, an Agoura Hills eatery with a verdant backdrop of the Santa Monica Mountains and its ancient trees that goes with her story well.

“Tree” is not a typical novel.

Watts wrote the story, centered on a sentient tree, in the genre of magical realism, which basically means her story is based at once on fact, fiction, a little bit of magic and a whole lot of charm and fantastic out-of-the-box thinking.

“Tree lives in one place and the world comes to it,” Watts said, as she attempted to convey the mystery and scope of the story.

The tree lives for a long, long time, so life around the tree—and life in the Santa Monica Mountains— evolves into multiple stories that encompass scientific facts about hydrology and geology and historical lore such as that of the Chumash Indians.

When asked to summarize the book’s plot, Watts said that when Tree sprouted hundreds of years ago, it grew tall and strong because of its emotional relationships with other plants.

What seemed like a plot too fantastical for me to fully appreciate turned out to be quite an interesting tale. The tree in the story doesn’t just grow, but it learns and it communicates with people, animals and other plants in ways that begin to make sense.

As off the wall as all this may seem, Watts has done her homework. She said she researched local history to develop characters that were true to their time and place. The connection between Tree and a young Spanish-Mexican woman in the 1820s leans toward historical fiction.

But the really compelling elements of the story are based on scientific research.

Trees, according to Watts, use fungi as a communication tool. And she based some of her story on the work of German forester and author Peter Wohlleben, who wrote “The Hidden Life of Trees: What They Feel, How They Communicate.”

“(Wohlleben) suggests trees use scent as communication, in part electrical messaging that they can feel, and in part the concept first proposed by scientist Dr. Suzanne Simard, and others, that trees use fungi to send messages back and forth to one another and to share food and water.”

A BBC report called the process a kind of underground internet between plants. To be sure, the science and the history add to the drama of the story.

Watts provided other intriguing hints about her book—which is set to be released on Earth Day, April 22. She said a Russian term, “dascha dushu,” translates into “speaking soul to soul,” part of her book’s central theme.

It can also mean best friend.

Dascha dushu is important in the life of Tree, who is in search of that kind of close connection— first with grass, which dies in one year, a speck of time compared to a tree that can live for hundreds of years.

“I wanted to show that life is precious even if it’s just for one year,” Watts said.

The first human that Tree connects to is a woman who has experienced extreme grief. The connection between the woman and Tree “busts the species barrier” and gives us more of that magical realism that flourishes throughout the story.

Watts opened her own publishing house to finish her book and received financial support from friends and environmentalists. She hopes one day to help other new authors break into the business.

As with Tree, Watts’ connections have sprouted far and wide. She was asked to participate on a panel at the L.A. Times Festival of Books, set for April 22 and 23. She will also introduce “Tree” at a reading at Diesel Books in Brentwood at 3 p.m. April 30.

In short, Watts calls the book a “love letter to the Santa Monica Mountains.

Area nursery sprouts hope, optimism, jobsJazz club finally back in the swing of things after lockdownSpeech and writing contest