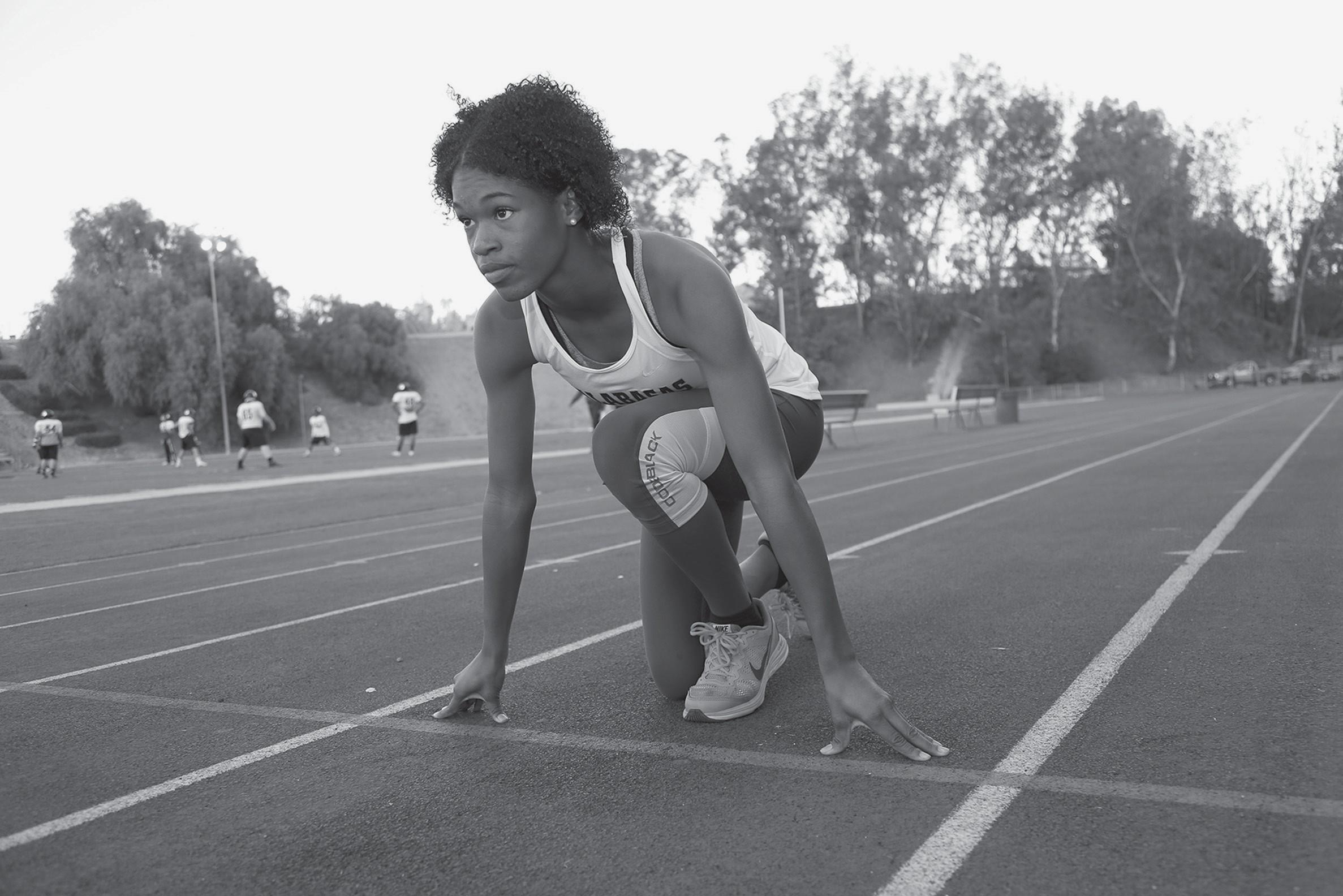 BORN TO RUN—Janiah Brown is a freshman runner for the Calabasas High girls’cross country team. Brown captured the Marmonte League individual title on Nov. 5 at Newbury Park in 17 minutes, 57 seconds.

“She works as hard as any athlete I’ve seen,” Vertelney said. “She has the right attitude and she has the right muscles. It looks effortless when she’s running. She’s just got it.”

Brown is setting the bar for all future cross country runners.

She quietly took first place in the varsity girls’ race at the second Marmonte League meet of the season Oct. 15 at Newbury Park with a time of 18 minutes, 22 seconds.

She breezed to a first place finish in the frosh race of the Ventura County Cross Country Championships on Oct. 30 in 19:20. Her time was significantly slower than her other marks, but she still would have notched a top-20 mark against varsity runners.

Her most impressive feat came Nov. 5 when she captured a Marmonte League individual title at Newbury Park.

“I was just trying to have fun and try my best,” Brown said of the race, which she completed in 17:57. “I couldn’t believe I actually won the race as a freshman. It feels good knowing I can do it as a freshman.”

Vertelney said he was excited the Coyote earned the victory.

“The goal was to be in the top-six to advance to the postseason, but it was always about racing to win,” he said of the league finals. “Did I think she’d win? I didn’t know. We had a plan, and she stuck to it perfectly. She ran a really smart race.”

The freshman sensation will get her chance to extend her season if she can finish in the top-eight at the CIF-Southern Section Division 3 preliminaries on Sat., Nov. 14.

“I think she has a chance to compete,” Vertelney said.

If there’s one thing Brown does well, it’s compete.

Johnnie Brown, Janiah’s father, said his daughter’s speed was apparent as a youngster.

“When she was 5, she was beating 6- and 7-year-old girls,” he said of his daughter. “That’s when I knew she had something. Her form was already perfect at that age.”

Janiah Brown is a natural at running races, and she’s got strong athletic genes in her family.

Her uncle, Charles White, was an All-American running back at USC who won the Heisman Trophy in 1979. Brown’s cousin, Russell White, starred at Crespi before becoming an All-American running back at the University of California-Berkeley; he also played one season in the National Football League. Johnnie Brown played football at Cal State Northridge and Humboldt State.

Her brother, Jeremiah, is a junior cross country and track and field runner for the Coyotes.

In a family full of talented runners, it could be tough to stand out in a sport. That’s not the case with Janiah Brown. Her father said he couldn’t be prouder of what his daughter’s accomplished so far.

“She surprised me,” he said of her league title. “Watching her run amazes me. I’m happy she’s having fun. That’s the most important part, and she’s enjoying it.”

Calabasas teammate and cousin Kyla Robinson-Hubbard, a freshman, said the ferocious runner is a sweetheart away from the course.

“She’s really nice, and she’s funny,” Robinson-Hubbard said. “We play around a lot. When she’s around other people, she’s shy. You have to get to know her.”

“She has a lot of talent, but she’s not cocky at all,” Crockrell said. “She carries herself really well. She’s not the kid that tries to show off. She’s dedicated and helpful.”

Brown said she wants to maintain a 4.0 grade-point average throughout high school. The studious freshman lists winning a state title as her second goal.

A league crown is a solid starting point in a high school career, but Brown still has three more years to sign a college scholarship she’s always dreamed of earning.

“I think colleges are already taking notice,” Vertelney said. “With her times now, she could be running on some college teams. She has three and a half years to go. I couldn’t imagine why she wouldn’t be a Division I athlete.”

Before Brown leaves Calabasas, Crockrell believes her teammate will leave a lasting legacy.

“I think she can break every record at the school,” Crockrell said. “She’ll be a legend at this school.”

Janiah Brown in a nutshell

Janiah Brown, 14, is one of the most talented cross country runners in Acorn country. The Calabasas High freshman claimed the Marmonte League individual title on Nov. 5 at Newbury Park. She wants to extend her postseason with a solid outing at the CIF-Southern Section Division 3 Cross Country Championship Prelims on Nov. 14 in Riverside.

Canyon quartetA Bolt to the heartSommers vaults to record