Birthday in the wild 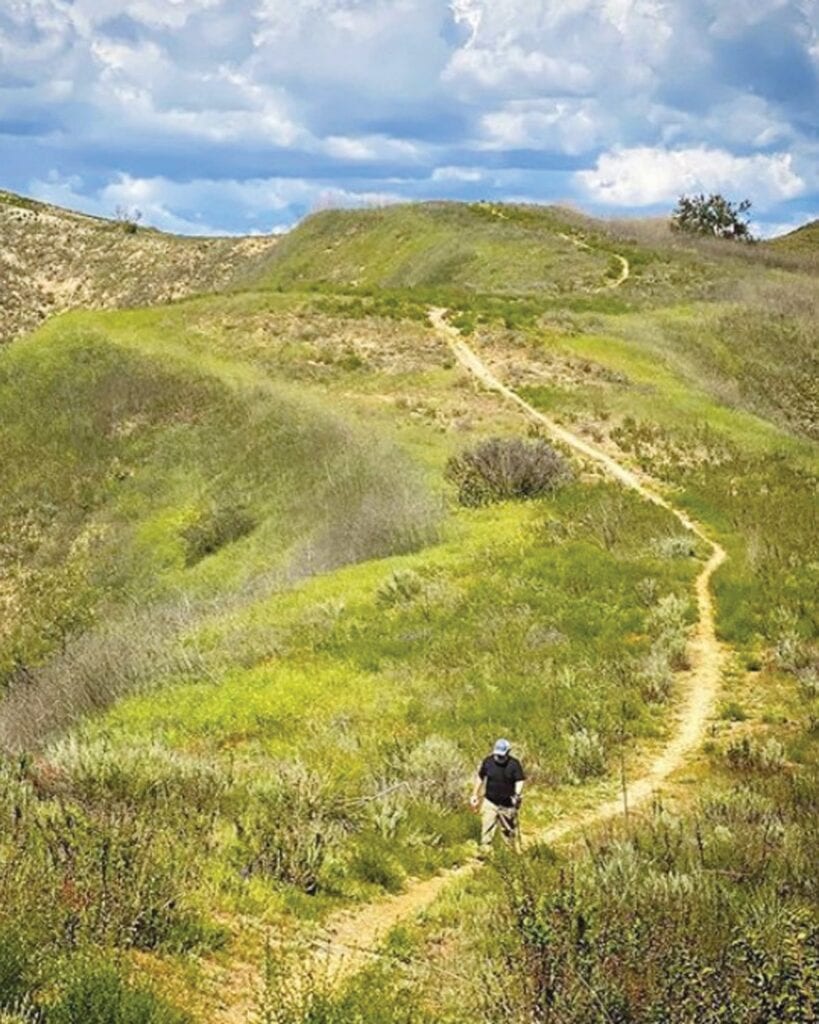 YELLOW STICK ROAD—A hiker enjoys one of the hundreds of miles of open trail in the Santa Monica Mountains National Receation Area. Early activists fought to preserve the mountains as a national park. Courtesy of National Park Service

The Santa Monica Mountains are visible from almost anywhere in the Conejo Valley, but unless someone’s feeling the itch to go hiking, the peaks are just part of the background. That makes it easy to overlook just how significant they are.

This month marks the 42nd anniversary of the creation of the Santa Monica Mountains National Recreation Area. It’s the largest urban national park in the world and was created through the combined efforts of grassroots activism, politics and public debate.

From the mountains to the sea, the playground of metro Los Angeles contains more than 500 miles of trails. Its rare Mediterranean climate makes it the perfect place to hike, explore and recreate.

Native Americans once walked in these woods and along these ridgelines. Today, park officials are trying to keep the ecology in the same pristine condition that it once was.

Ana Beatriz Cholo, a park ranger and spokesperson for the National Park Service, said residents worked with local, state and federal agencies throughout the 1960s and ’70s to protect the area from developers. 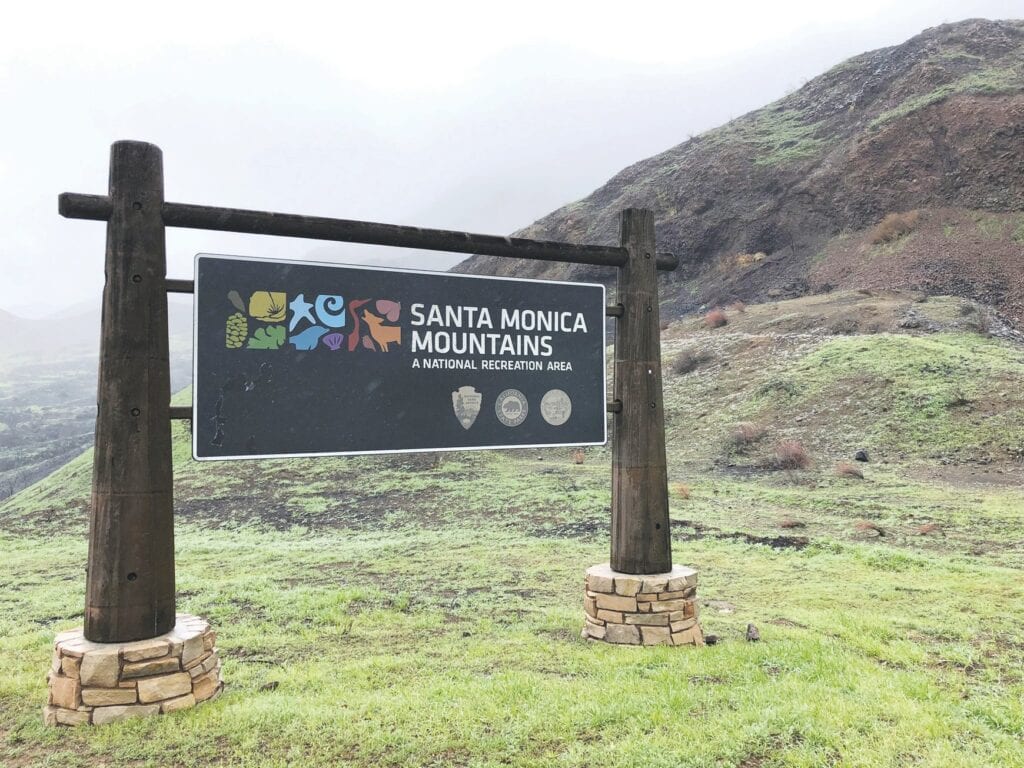 WELCOME HOME—This section of the Santa Monica Mountains near the Conejo Valley at the north end of the park blooms lush and green when the rains come in winter. Acorn file photo

“It seemed like a prime area to protect. The population was growing quickly, and developers were eyeing these vast open spaces. The question posed by a diverse group of people was, ‘Should we develop these lands or save them?’ The latter was chosen,” Cholo said.

Local environmental activists Sue Nelson, Margot Feuer and Jill Swift worked with elected officials— including Marvin Braude of the Los Angeles City Council, U.S. Rep. Howard Berman and Joe Edmiston of the Mountains Recreation and Conservation Authority (MRCA)—for legislation in the U.S. Congress that created the national recreation area. The final hurdle was cleared by U.S. Rep. Anthony Beilenson, a Democrat whose district included much of the mountain range.

Beilenson helped author the National Parks and Recreation Act, which was signed into law in 1978 by President Jimmy Carter. 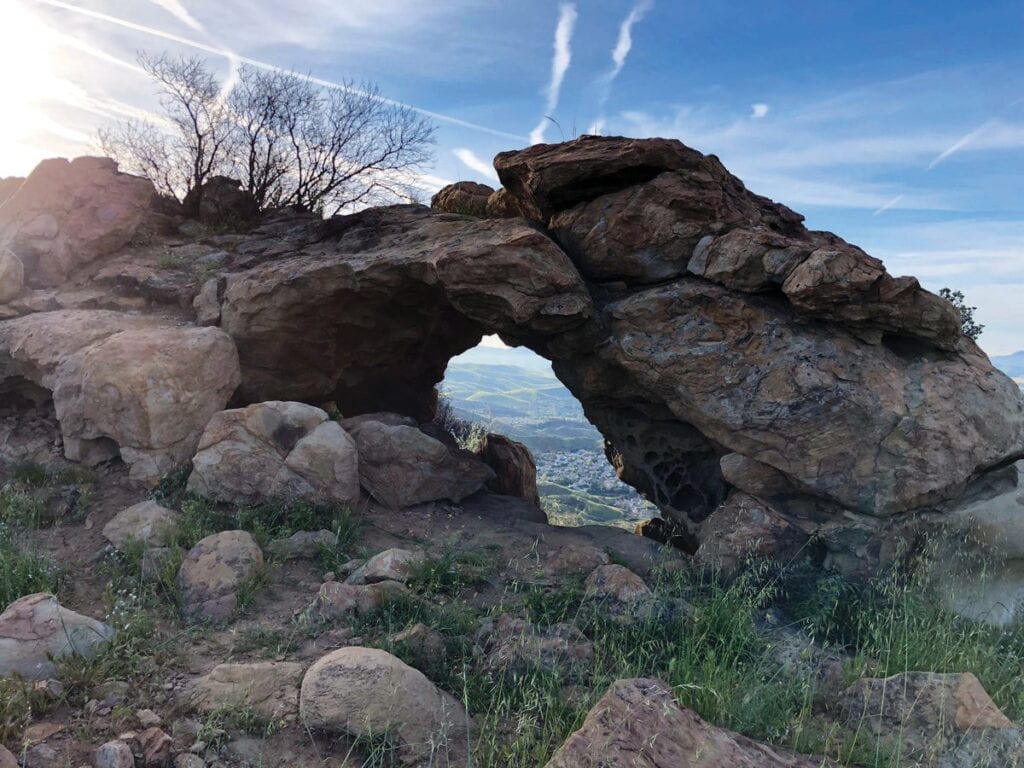 COOL GEOLOGY—Adjacent to the Santa Monica Mountains National Recreation Area lies this interesting rock formation at Oakbrook Regional Park near Oak Park. The mountains are governed by a patchwork of inter-agency cooperation, all with the goal of keeping open space preserved and resources protected.

Carter’s signature created a 150,000-acre preserve that stretched from Beverly Hills Franklin Canyon in the east to Ventura County’s Point Mugu in the west. Land purchases over the years—and a 2,000-acre expansion at the turn of the century that folded in the upper Las Virgenes Canyon Area—brought the total size of the recreation area to just over 153,000 acres.

“When the law was passed in 1978 it kind of started a cultural and historic movement to preserve this place and make us all aware of just how special it is,” said Dennis Washburn, first mayor of Calabasas and early supporter of the national park.

“Here we are 42 years later and we’ve survived all the threats to the dissolution of that national recreation area,” Washburn said.

The park extends from Malibu on southern border to the Conejo Valley in the north.

The federal Rim of the Valley Corridor Preservation Act would add another 190,000 acres to the SMMNRA. The legislation passed the U.S. House of Representatives earlier this year with heavy bipartisan support. 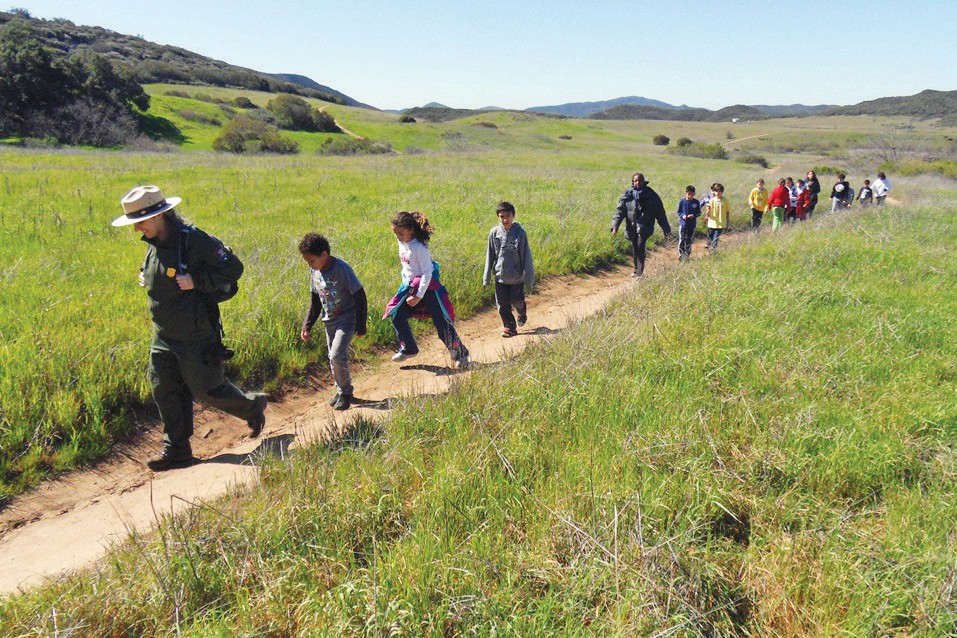 ON THE SCENE—At top, a park ranger leads children on an education hike in the mountains. Above, a hawk with prey and, at left, a climber ascends Ladyface Mountain in Agoura Hills.

The recreation area comprises a patchwork of public properties, each overseen by different government agencies. Today the site is jointly run by the National Park Service with three other agencies: California State Parks, the Santa Monica Mountains Conservancy and the MRCA.

It’s not readily apparent where one jurisdiction ends and another begins. Cholo said the open borders are by design because “we just want people to enjoy their public lands.”

Protecting the open space from developers was just the first step. The land is worth saving, advocates say, because of the ecosystem that lives there—the plants and animals that thrived in the area long before humans arrived.

“The original goal was to preserve natural areas in perpetuity in urban Los Angeles and Ventura counties. People thought if they put the land into conservation ownership, most of the work would be done,” Cholo said. 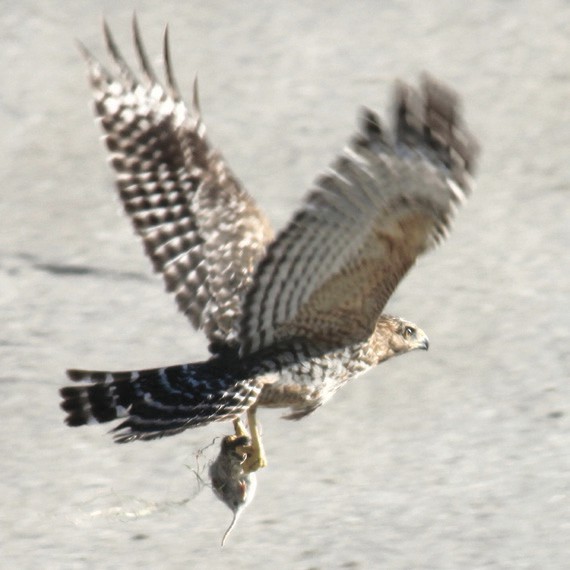 But there was a hitch.

“By the 1980s they recognized that the roads had basically created ‘islands’ (in the park). Our major challenge now is to continue that work of conserving lands and making sure that conserved places can connect across highways to the other side.”

The face of the new conservation effort is the mountain lion. A new generation of wildlife activists is dedicated to saving the dwindling species.

The National Park Service has been studying cougars via GPS tracking collars since 2002.

Areas of the park cut off by suburban development have created pockets of genetic isolation, leaving cougars unable to find food and mates. Many animals attempt to cross the roadways that cut through the park and are killed in the process.

The next addition to the largest urban recreation area in the world will be the largest wildlife crossing in the world, an $88-million animals-only bridge over the 101 Freeway in Agoura Hills. Construction on the 165-foot-wide bridge is expected to begin next year. Once completed, the overpass will be seeded with nearly an acre of vegetation. It is being built with a combination of public grant money and private donations. 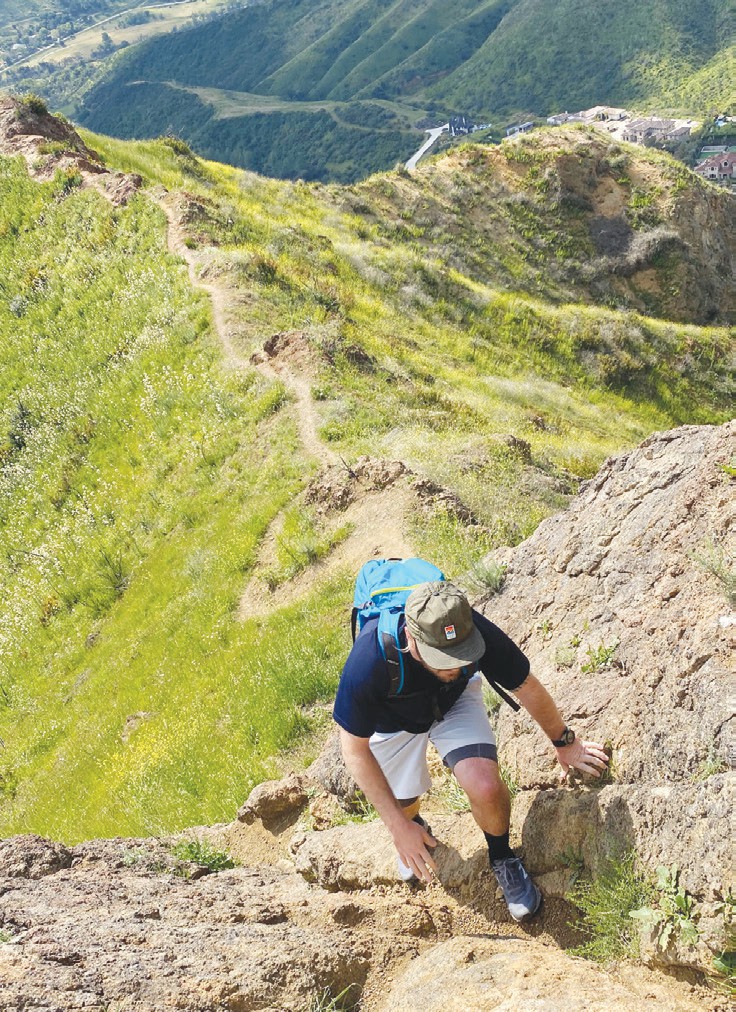 INFO CENTER—The national park visitor center is at the former King Gillette Ranch in Calabasas. It opened in 2012.

“It’s hard to get someone just driving through to understand just how special this area is, that it’s worth sustaining and putting money into,” Washburn said.

The National Wildlife Federation is leading the fundraising effort with its #SaveLACougars campaign, which has raised $15 million so far. 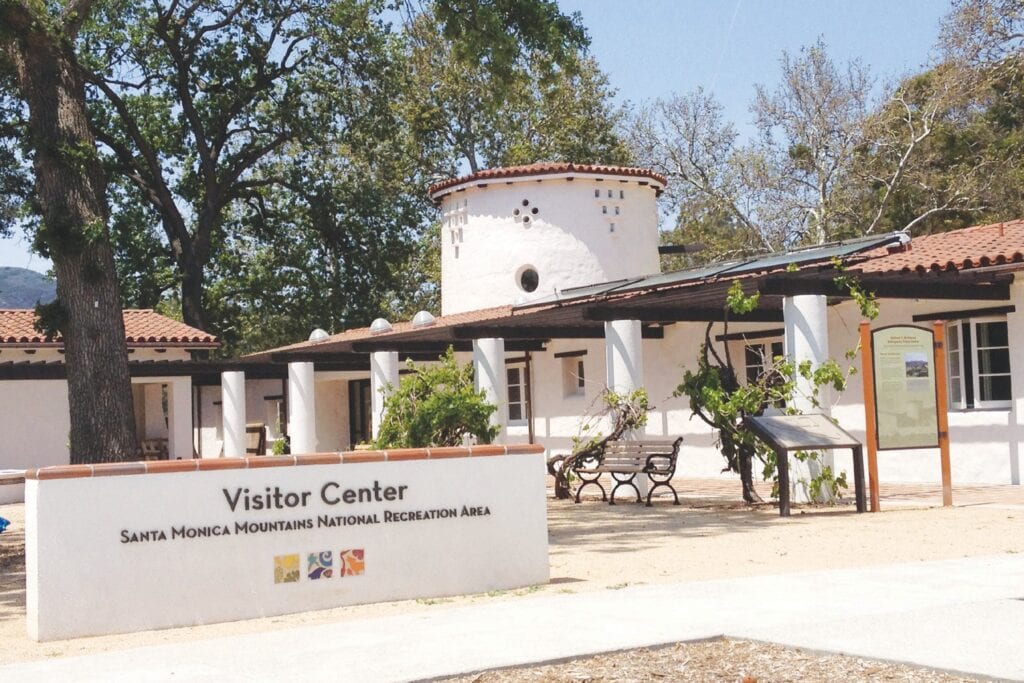