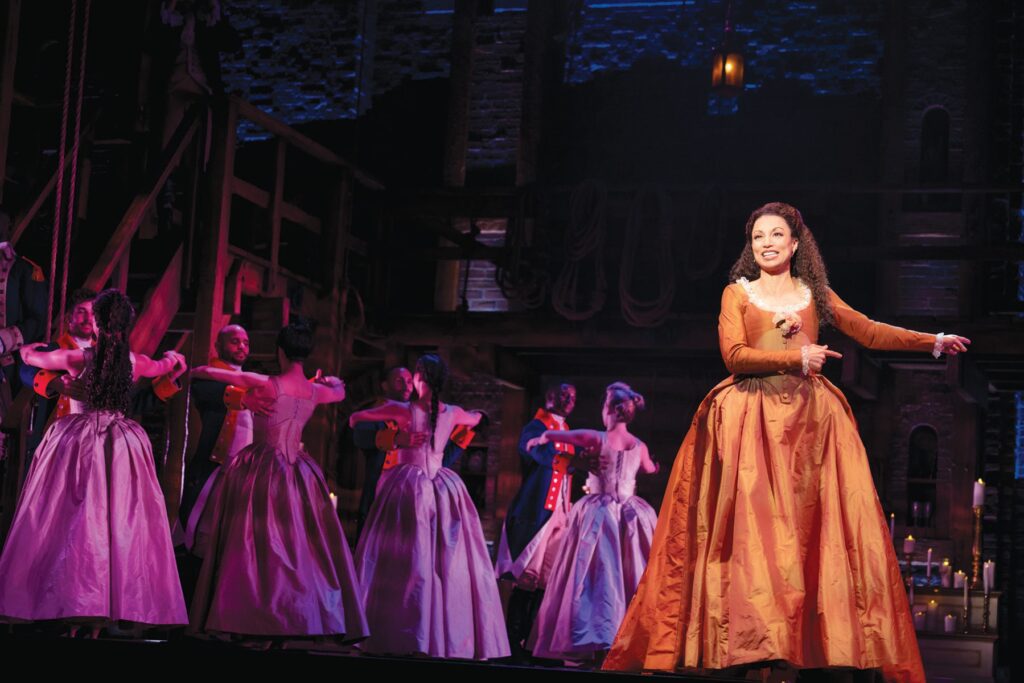 REVOLUTION IS HAPPENING—Sabrina Sloan returns onstage as Angelica Schuyler in “Hamilton,” which resumed its run at the Pantages Theatre in Hollywood. Courtesy of Joan Marcus/Broadway in Hollywood

Like many kids in the Conejo Valley, Broadway actor Sabrina Sloan grew up singing at Calvary Community Church in Westlake Village.

Sloan moved away from Thousand Oaks when she was 8 and went on to perform on larger stages, studying theater at Northwestern University and appearing in such Broadway shows as “Hairspray,” “Catch Me If You Can,” “Motown the Musical” and “In the Heights” with Lin-Manuel Miranda.

Now the T.O. native is reprising her role as Angelica Schuyler in Miranda’s “Hamilton,” which tells the story of Founding Father Alexander Hamilton. The show has returned to the Pantages in Hollywood after more than a year of COVID-related closures.

Sloan, a mother of two who has played Schuyler since 2017, said what she missed most during the play’s 523-day closure during the pandemic was the audience.

“When you’re in theater, they say everyone in the audience has one collective heartbeat,” she told the Acorn. “Everyone is really breathing and feeling this story together. It’s an experience we’re all going through together and in person. That’s something you can’t trade.”

Another experience she wouldn’t trade was playing at Fort Wildwood as a child. Sloan’s father flew for American Airlines, and he was transferred to LAX when she was an infant. She grew up in the Wildwood neighborhood of Thousand Oaks and attended First Baptist Academy.

“My parents picked Thousand Oaks because it was supposed to be the up-and-coming safe area of Los Angeles,” she said. “We lived on North Velarde Drive. I loved playing pretend over there. My early years of adventure were over there.”

For Sloan’s two children, their early years of adventure have been following their mother’s career on and off Broadway. Her role in “Hamilton” has taken her from Puerto Rico to San Francisco, and her son and daughter have seen the musical at least eight times.

“They could probably do the show. I think my son knows more of the lyrics than I do. They have been Hamilton and Angelica for Halloween, so it’s been fun to resurrect that music again,” Sloan said.

The Northwestern grad discovered her love of theater when she was 5 or 6 years old and her mother took her to see a performance of “West Side Story.”

“We went down to the orchestra pit. I looked up and said, ‘That’s what I want to do,’” she said.

She said she loves playing Schuyler, Hamilton’s sister-in-law, because she’s ambitious, intelligent, smart, and ahead of her time in terms of advocating for women’s rights.

“She’s also extraordinarily gracious and sensitive to her friends and family. I love playing those parts where you see the strength but you also see vulnerability. It’s always exciting to play those many dimensions,” she said.

Sloan moved to Orange County after leaving Thousand Oaks and said that one of the perks of the long-term engagement at the Pantages is that friends from high school can come watch her perform.

“ It ’ s a poignant moment of my life that I’ve been able to perform here,” she said.

But the singer said she’s noticed how much areas like Westlake Village and Calabasas have changed since she was a child.

“It’s so funny to me that’s Kardashian land now,” she said.