Monday-Tuesday drencher good for the drought but havoc reigns 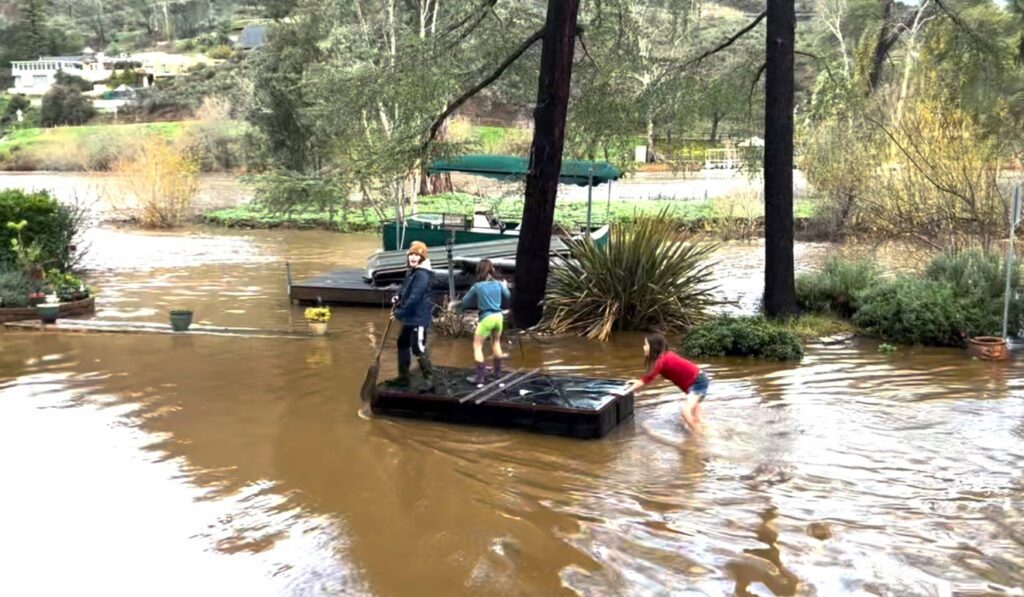 HUSTLE AND FLOW–Girls with a makeshift raft embark on a journey down flooded South Lakeshore Drive in Malibou Lake.     Courtesy Douglas Way

A weeklong storm including the Monday-Tuesday drencher easily dumped more than 5 inches of rain across the region, 8 inches in some spots, toppling trees, upending boulders and closing roadways when the debris and rising water levels made travel hazardous.

Agoura Hills’ seasonal rainfall rose to 15.76 inches as of Jan. 10—just under 2 inches of the average for the entire water year that runs Oct. 1-Sept. 30.

Other totals for the 2022-23 rain season include 15 to 16 inches in the Thousand Oaks area, depending on which gauge is used. Camarillo has collected almost 9 inches, Simi Valley over 10 inches in some spots and Moorpark more than 11.

The storm capped two weeks of overlapping weather phenomena—what the National Weather Service describes as an atmospheric river (dense moisture flowing in from the ocean) and a bomb cyclone (a storm with rapidly dropping pressure creating a cyclone effect)—that killed 12 people and left half a million in the Bay Area without power.

In Westlake Village, a giant tree fell across Triunfo Canyon Road early Jan. 10, bringing traffic to a halt in both directions. Another tree crashed into a garage on Via Colinas in Westlake.

From Calabasas north into Ventura County, the biggest storm occurred in the 24-hour period starting Mon., Jan. 9, when more than 5 inches of rain fell in some parts of the Santa Susana Mountains. Thousand Oaks got hit with almost 4 inches in the Monday deluge.

Several Ventura County highways, including one section of the 101 Freeway, were closed temporarily as the high water made driving impossible. State Route 23, Westlake Boulevard, was fully closed between Carlisle and Potrero roads due to flooding and vehicles being stuck in the high water, Caltrans said.

“Turn around, don’t drown,” was the meme that hit social media. 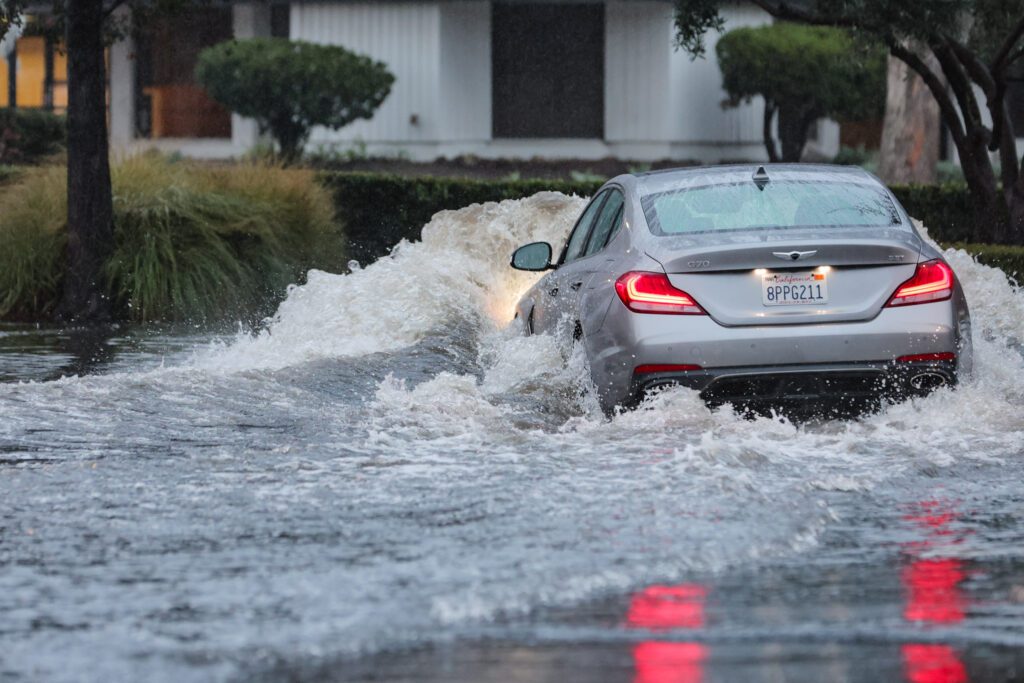 MICHAEL COONS/Acorn Newspapers
SPLASH DOWN–A motorist drives through a flooded section of the parking lot at the CVS store on Agoura Road in Thousand Oaks Jan. 4.

In western L.A. County, Malibu Canyon Road got shut down from Piuma Road south to the Pacific Coast Highway when a large boulder fell on the road. Topanga Canyon Boulevard between Mulholland Highway and the coast was closed due to mudslides, downed trees and water crossing the road.

But if you think the rain will ease California’s persistent drought, think again.

“The rain is quenching the thirst of our local region,” said Michael McNutt, public affairs and communications manager for the Las Virgenes Municipal Water District.

“We will notice the greening of our hills, mountains and lawns, but the impact to our water supply is a drop in the bucket.”

The Las Virgenes district remains in a state of local drought emergency and in Stage 3 of its Water Shortage Contingency Plan. This means restrictions on water use and penalties for violators remain. Chief among these is the once-per-week outdoor watering restrictions put in place last summer by the Metropolitan Water District of Southern California.

Similar restrictions are in place for customers of the Triunfo Water and Sanitation District. Its customers are allowed once-per-week sprinkler irrigation time per water station of 10 minutes, as mandated by MWD.

At Malibou Lake near Lake Shore Drive, resident Douglas Way was in cleanup mode after the latest storm.

Way’s 8-year-old daughter, Brynlie, joined two of her friends and hopped aboard a homemade raft that took them on a cruise down the flooded street.

It is certainly the wettest two-month period the region has seen since the big water year of 2018-19. 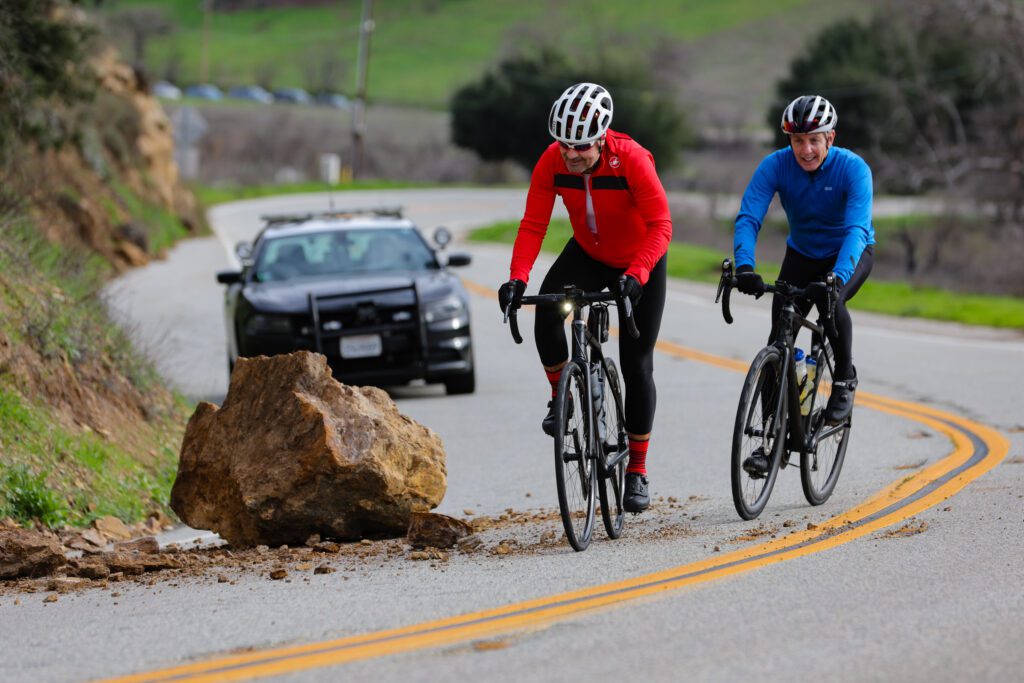 Michael Russo, communications director for the City of Calabasas, said the city’s public works crews were plenty busy because of the storm.

“They’ve installed approximately 300 sandbags in various locations that have historically had issues in preparation for the storms,” Russo said.

“Along with sandbags, other things like straw waddles and lumber are put down in some areas.”

The latter includes Calabasas Klubhouse Preschool, which uses a combination of lumber and sandbags to prevent water and mud from damaging the structure.

When a fallen tree blocked Old Topanga Canyon Highway near Dorothy Drive, a Calabasas tree contractor was able to quickly clear the mess. And in a move that should please motorists, city crews repaired at least a dozen weather-caused potholes.

While the biggest of the storms are behind us, more rain is possible on Jan. 16, the Martin Luther King Jr. holiday. The National Weather Service says not to get too comfortable as several more atmospheric rivers are on their way to California over the next 10 days.

As of the beginning of the week, the Station 8 Northern Sierra index showed 27.75 inches of precipitation, about 150% of the historical average.