Alzheimer’s mitts have ‘love in every stitch’ 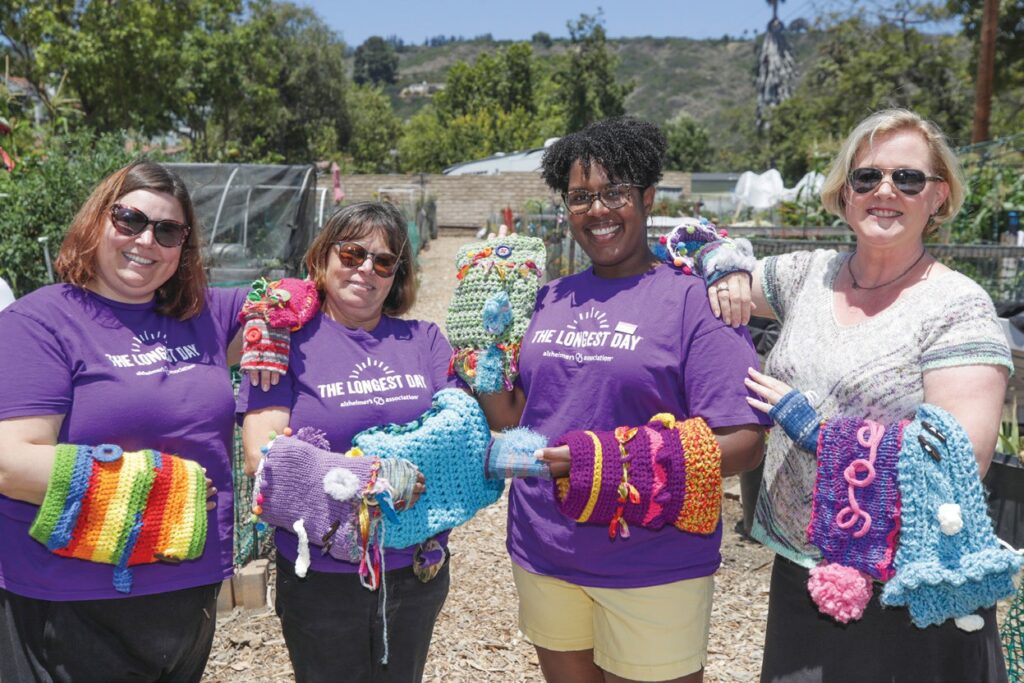 SEW NICE —The Knitwits of Camarillo, a knitting group, display items they made for a fundraiser for the Alzheimer’s Association. From left are: Shannon Anderson of Newbury Park, Debbie Thompson of Oxnard, and Lisa Merriweather and Dale Anne Eucker, both of Camarillo.. RICHARD GILLARD/Acorn Newspapers

For Lisa Merriweather, Alzheimer’s is personal: She lost her grandmother to the disease late last year.

That’s why the Camarillo resident encouraged her grassroots crafting group, Knitwits, to raise funds and awareness for the Alzheimer’s Association while putting their knitting skills to good use.

“All of us are really touched by Alzheimer’s, and it’s a wonderful opportunity to be able to give back to others,” Merriweather said. “Anytime that we can take something that aligns with our values and with things that we love to do anyway, it’s a win-win.”

Merriweather organized Knitwits in 2017 in an effort to build relationships.

“I wanted to have a community of knitters around me and wanted to feel some connection to others, and it really took off,” she said. “We have, over the years, become an amazing group of friends.”

Knitwits now has around 50 members who live across Ventura County.

Club members became involved in Alzheimer’s activism in 2018, when the owner of one of their favorite yarn shops, Anacapa Fine Yarns, asked customers to help knit blankets for Alzheimer’s patients.

“A lot of us participated and shared stories and understood that we had some personal ties,” Merriweather said.

She learned that other members had also lost loved ones to the disease.

Merriweather participated in the Longest Day, a fundraiser to benefit the Alzheimer’s Association, for the first time three years ago. People around the world participate in the event June 21, the day of the year with the most light, to fight the darkness of Alzheimer’s through an activity of their choice.

She appreciated the event so much that she introduced Knitwits to it last year and again this year.

“It’s important for me personally to participate because I wanted to honor my grandmother,” Merriweather said.

Shannon Anderson, a Knitwit member since 2017, lost her grandmother to Alzheimer’s and dementia in 2007 and her mother in 2018. She has also tested positive for the gene associated with the diseases.

“It’s something that’s really touched my life and the people that I’ve loved, and I wanted to do something that would allow the knitting community that I and Knitwits are a part of to show compassion and solidarity to people currently battling this illness,” the Newbury Park resident said.

One of the members, Debbie Thompson, suggested that they knit twiddle mitts, which help those with Alzheimer’s by keeping their hands warm and offering sensory stimulation.

When visiting her mother’s memory care facility, Anderson noticed that most patients were bound to beds and chairs.

“As a crafter, I’m not able to sit still unless I have my hands busy doing something, so I hope having something to do with their hands would be comforting to these people in the care facilities in the same way it is for me,” the Newbury Park resident said. “I hope . . . they feel all of that love that we put into every stitch.”

Merriweather, Anderson and seven other Knitwits members began working on the mitts in April. They met at the Coffee Bean and Tea Leaf every other week to exchange materials and knit together.

“It gave us something to be excited about and to rally around,” Merriweather said of the project. “It was so fun to make them and see everyone’s creativity really come to life.”

By their June 21 deadline, they had knitted about 45 twiddle mitts.

Anderson said it was amazing to see how members dedicated themselves to the cause and how their relationships grew stronger in the process.

“I feel like I’m supported. I don’t feel like I’m alone,” she said. “It feels hopeful because it’s a way to salvage something positive out of what would otherwise be just a sad situation.”

With the help of Stephanie Foster, development manager for the Longest Day, the mitts will be donated to various memory care facilities throughout the county.

The group also raised nearly $1,500 in donations for the Alzheimer’s Association California Central Coast chapter. The money will fund local care and support as well as global research.

Fundraising, Foster said, is critical to raising awareness about the resources available to patients and their families.

“When Alzheimer’s and dementia are talked about, people often realize that most of us have a personal connection to the disease,” she said. “If everyone keeps knowledge of our resources in their back pocket, they could be the one who connects a friend or relative to our services.”

Along the way, Knitwits members also found solace in discussing how the disease has impacted their lives.

“It was good to be able to share my story about my mom and my grandma and feel like losing them and everything that I went through with that wasn’t in vain—that sharing that story could contribute to the greater good,” Anderson said.

Both Foster and Merriweather encourage others in the community to take action in a way that resonates.

“You can really raise money and raise awareness for Alzheimer’s doing anything that you love,” Merriweather said. “I’m so happy to support this organization over the years and plan to continue to do it.”