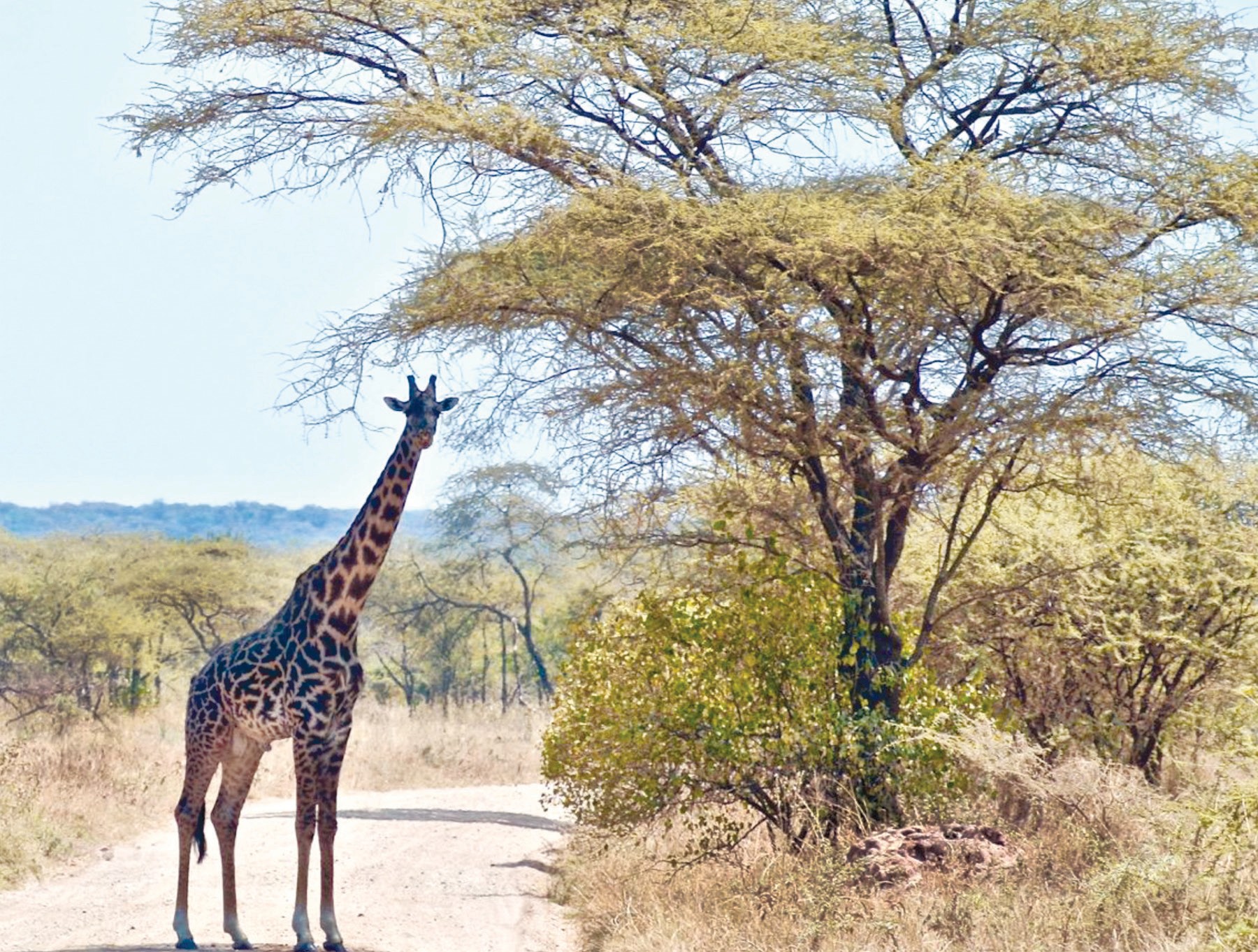 HEIGHTENED ALERT—This is the giraffe that attacked the Menteer couple during a trip to Africa in 2015. Courtesy of David Menteer

Survival in Africa is a tall order, and even the gentle giraffe will sometimes go to extremes to protect itself and its herd.

In an unusual turn of events, a Calabasas couple visiting Africa in 2015 were attacked by a male giraffe they believe was guarding a trio of females.

The encounter occurred shortly after David and Sam Menteer arrived at the Royal Livingstone Hotel near Victoria Falls in Zambia, where they had walked with lions in a rescue reserve a few hours earlier.

Upon returning to the resort, the couple went for a swim and were walking back to their room when they realized they had left their key at the pool. 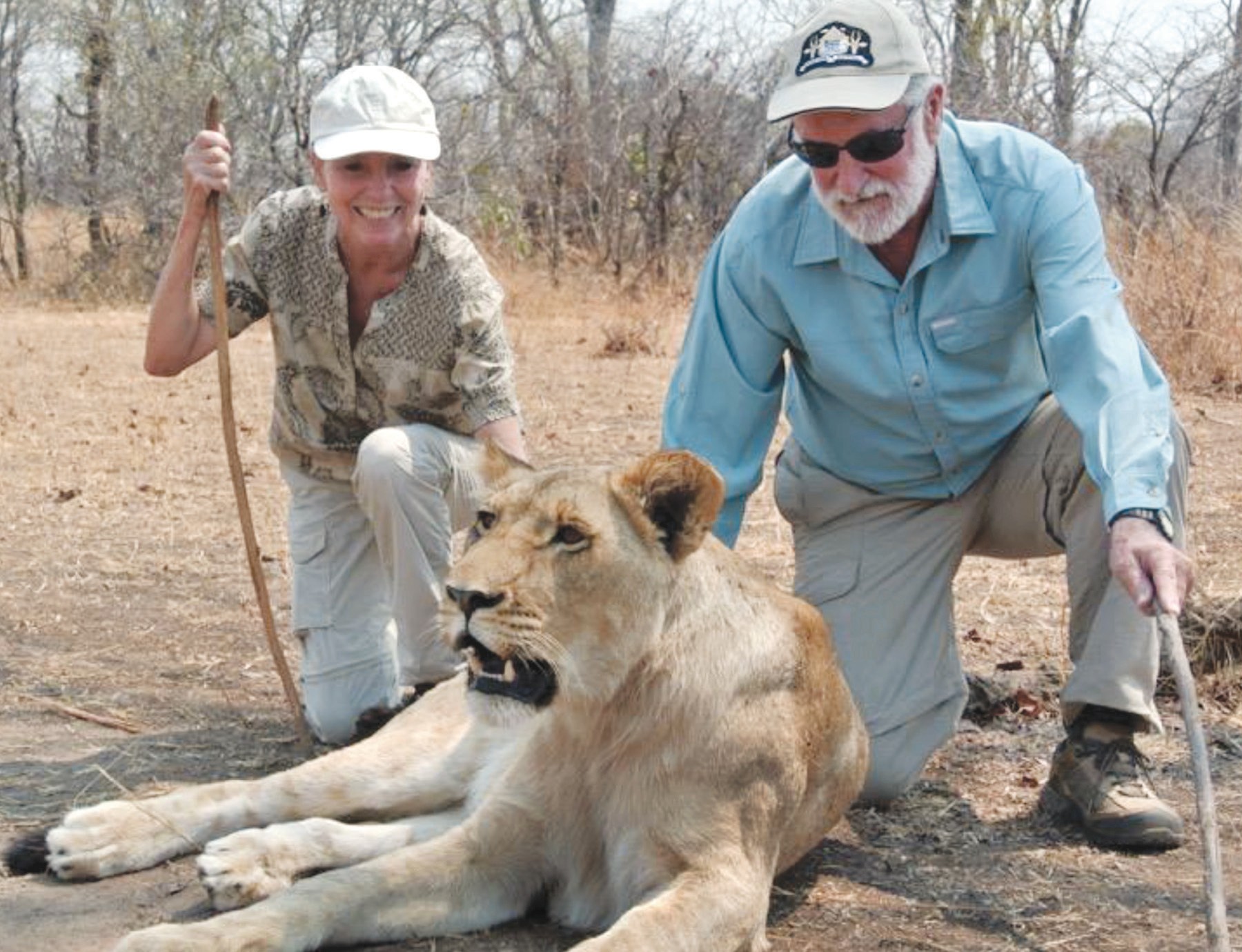 JUST ‘LION’ AROUND—The Menteers walk among lions on the morning of the giraffe attack. The scent of the big cats may have spooked the giraffe.

Sam went back to retrieve it while David stayed around the backside of the lodging to watch zebras graze and monkeys play.

As he returned to the front of the lodge through some small trees, he was confronted by a 17- foot alpha male giraffe with three females nearby, he said.

David saw his wife approaching from the opposite direction and held up his hand to stop her so she could admire the animal.

“We remained very still and were thinking what a shame we didn’t have a camera. We were still in our bathing suits with nothing but towels. After a few minutes the male who had been feeding on the leaves of a tree turned his head and made eye contact with Sam,” David wrote in a travel diary.

Suddenly, the animal’s nostrils flared, and it reared up and struck her to the ground and pinned her.

“She screamed, and I went after him, yelling and trying to punch him to distract him,” David said.

But the giraffe was unfazed as David was only able to hit its thigh and couldn’t get the animal to move away.

“He swept his head at me and butted me into a tree about 3 feet off the ground,” said David, who thinks the lingering scent of lion in Sam’s hair may have prompted the attack.

People nearby heard the screams and came to help. They started yelling and threw rocks to scare the herd away.

A groundskeeper came and took Sam away on a golf cart. David, who had crawled around a tree, was unaware that his wife had been taken. He limped to the reception area, where he explained the situation to an astonished staff.

He and his wife were then reunited at a nearby first-aid station. Her leg had been split open by the giraffe. David suffered internal bruises. Sam had surgery within an hour of the incident at a small clinic in Zambia where a doctor sewed up her leg with about 45 stitches.

The couple spent the next sweltering day trying to get to a hospital in Johannesburg. With help from their insurance company, David said, they were able to “open the airport the following night to let a Lear jet air ambu- lance take us to Johannesburg where we spent the next three weeks receiving great care, which included three operations and a skin graft on Sam’s leg.”

Sam said she feels stronger after what happened.

“One of the things that I got out of it is that I’m a firm believer that what doesn’t kill you makes you stronger. There is a sort of survival instinct that happens when you realize that you could die. Everything surges and your focus becomes specific,” she said.

The Menteers credit their full recovery to the skilled surgeon in Zambia and to the quick response of their travel insurance intermediaries.

“It was a bizarre incident, but we are very fortunate,” Sam said.

The two retired television industry professionals had previously visited Kenya and Tanzania. They were set to visit wildlife in Zambia, South Africa and Botswana on their second safari in 2015 when the giraffe attacked them.

Despite their ordeal, the Menteers said, they did not want anything bad to happen to the giraffe that attacked them.

“These animals are precious,” Sam said.

“We don’t want to give giraffes a bad rap,” David said. “We still love them regardless. We flew halfway around the face of the earth to see these guys. We were not about to let something happen that is unfortunate for them.”

Anything can happen when people travel abroad, he said.

“In our case, I think we just weren’t timid enough and that animal had a bug up his rear end,” he said.