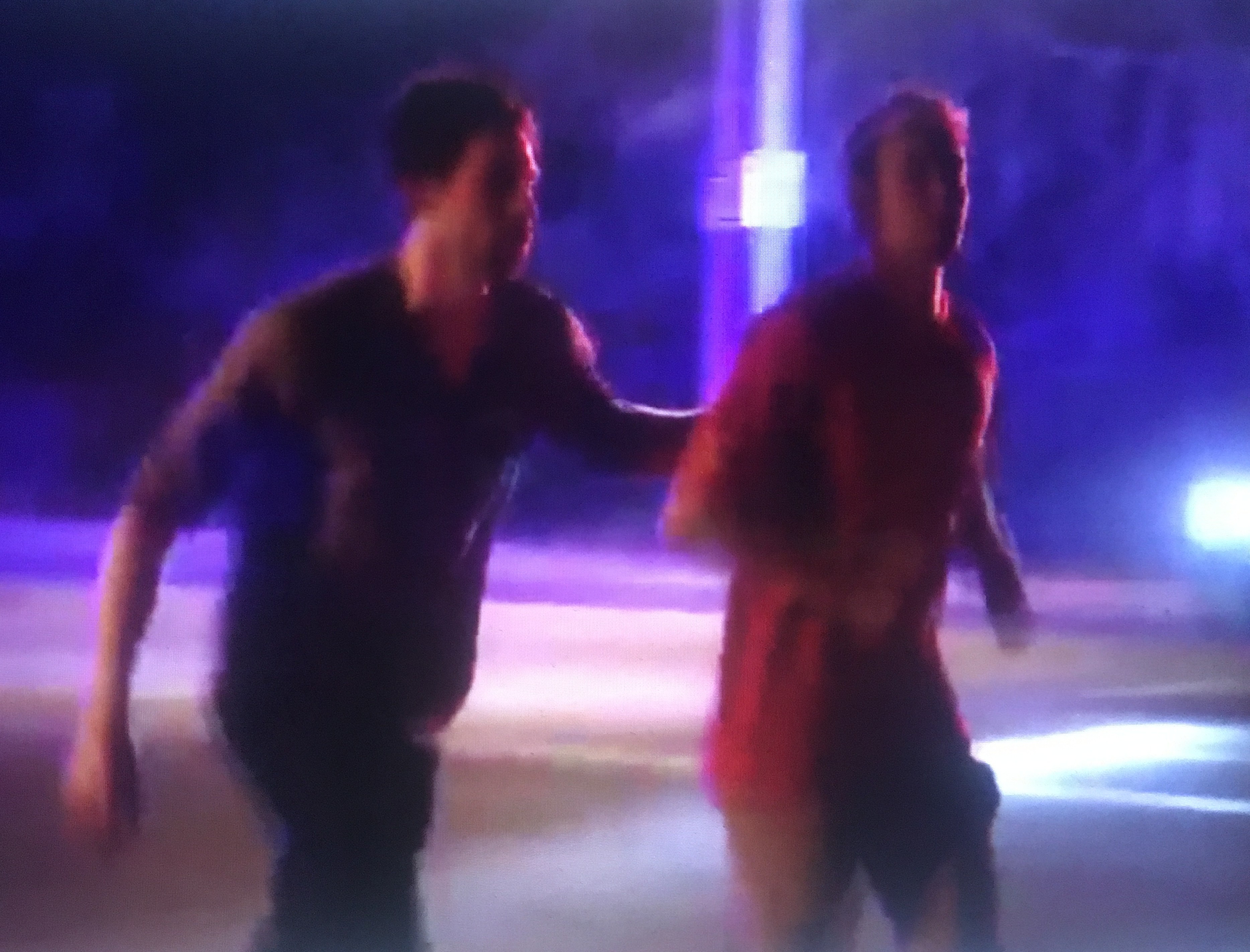 Two men run from the scene at Borderline Bar and Grill as the shooting unfolds around 11:20 p.m. Nov. 7.    JOEL COUNCIL/Acorn Newspapers 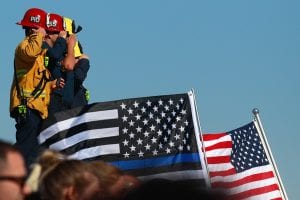 Police confirmed 13 people are dead, including Long, who died of a gunshot wound, possibly self-inflicted. Another 10 to 20 clubgoers were injured, many of them local college students.
Among the deceased is Sgt. Ron Helus of the Ventura County Sheriff’s Office, a 29-year veteran of the department who, along with a California Highway Patrol officer, rushed into the nightclub to confront the shooter, police said.

Helus, 54, a Moorpark resident, was met by a hail of bullets, police said. The CHP officer was able to pull the sergeant from the line of fire, but Helus died a few hours later at the hospital as a result of multiple gunshot wounds.

“He died a hero,” Ventura County Sheriff Geoff Dean said of Helus at a 2:45 a.m. press conference held in a staging area at Janss Marketplace on the other side of the freeway from the shooting site.

Fighting back tears, Dean, who was serving his last day as sheriff, described Helus as a “hardworking, dedicated sheriff’s sergeant” just a year from retirement.

“Some had to break down windows to escape,” Steinwender said shortly after midnight Nov. 8.
According to witnesses, Long, dressed in dark clothing, walked up to the entrance of the bar, shot the security guard with a handgun and then began shooting at the cashiers near the front door. Police said he used his mother’s car to get to Borderline.

At one point Long stopped to reload, giving some inside a chance to escape, witnesses said. Students shared stories of using barstools to bust through the club’s glass windows to get away.
Borderline owner Brian Hynes, a longtime local resident, was reached for comment Thursday.

“At this point I’m just working with local and federal authorities to give them what information I can. It was horrible and so close to home, knowing every staff member that was there,” he said. “I’m trying to grieve myself as well. I don’t know what to say or do in a situation like this.”

CLU canceled classes Thursday in the wake of the shooting and held a vigil at its chapel.
Shooting victim Meek was a recent CLU graduate.

“Our hearts are filled with such sorrow over the violence that has taken place in Thousand Oaks. Our hearts are heavy. There are no words to express such sorrow,” CLU vice president Melinda Roper and campus pastor Melissa Maxwell-Doherty said in a Thursday morning statement to students.

Coffman was a Camarillo native who graduate from Adolfo Camarillo High School. His father, Jason, joined other families at the Thousand Oaks Teen Center on Janss Road to receive information from authorities.

Outside he said his son’s legacy is one of love and laughter.

“The last thing I told him was, ‘Son, I love you,’” Jason Coffman said.

The shooter
Long attended Newbury Park High School, where he played varsity baseball, and graduated when? He went on to become a Marine Corps corporal who served from 2008 to 2013, the Marine Corps said in a statement.
Long was a machine gunner who deployed to Afghanistan from 2010 to 2011. He received multiple military service awards including the Combat Action Ribbon, the Marine Corps Good Conduct Award, the Afghanistan Campaign Medal, the Global War on Terrorism Service Medal and the National Defense Service Medal.

“The Marine Corps extends its deepest condolences to the families of the victims of this senseless tragedy,” the statement said.

Long lived with his mother on Fowler Avenue, a quiet street in Newbury Park with sweeping views of Mount Boney and its foothills.

Jeff Moss is a commercial mortgage broker who lives five doors down from the Longs. He said he learned of the shooting when a neighbor called him in the morning to ask if his daughter was OK.

When Moss looked outside his front door, he saw FBI vehicles, law enforcement officers and news vans.
“It was a shock,” he said.

Moss said Long’s mother works in her yard and often walks her three German shepherds around the neighborhood. They would sometimes chat over their mutual love of dogs. He said he had nothing but positive interactions with the mother.

“She seemed great. She was always super nice. We always chatted up about the dogs,” he said. “She liked to exercise. She’s pretty fit.”

Moss said he never saw or met Long and had no idea he was living down the street from a veteran, although he sometimes saw a truck parked outside with a Marine Corps sticker on it.

He described the neighborhood as quiet.

“You wouldn’t expect that in this town for sure,” he said. “If you could pick a neighborhood where that couldn’t happen, you would probably pick this one for sure.”

Dawn Megli-Thuna contributed to this story. 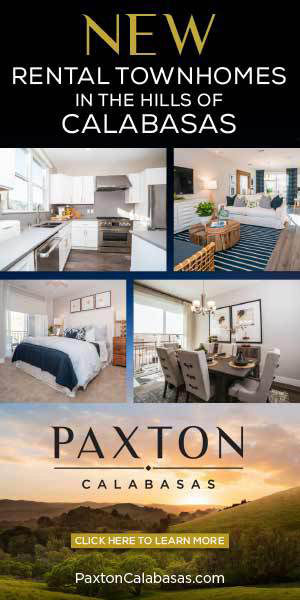